Average petrol prices increased by seven per cent in the past three months, hitting a four-year high in real terms of around 145 cents per litre (cpl) in Australia’s largest cities (Sydney, Melbourne, Brisbane, Adelaide and Perth), according to the ACCC’s latest petrol monitoring report.

Annual average prices in the five largest cities in real terms steadily fell between the 2013-14 and 2016-17 financial years. However, in 2017-18 the average price of petrol increased overall by nearly 10 per cent compared with the previous year.

“The OPEC cartel in particular continues to have a damaging effect on Australian petrol prices. In late-2016 OPEC, and some other crude oil producing countries, agreed to cut production. This restricted supply into the market, which has clearly started to bite through steadily increasing petrol prices in the past financial year.”

“A weaker Aussie dollar has also increased costs for wholesalers buying petrol for the Australian market, which flows through to consumers who pay for this at the pump,” Mr Sims said.

While higher global oil prices are the major factor, the ACCC report also shows that the gross margins Australian petrol retailers are obtaining for every litre sold are also adding to the price pressure motorists experience. Average gross retail margins hit a record high in 2017-18. Annual average gross indicative retail differences (GIRDs), a broad indicator of gross retail margins, in the five largest cities in 2017-18 were 12.4 cpl. This is 4.3 cpl higher than the average in real terms over the last 16 years.

“Current gross retail margins in the five largest cities are now over 50 per cent above the 16 year average since the ACCC began tracking this data.” Mr Sims said.

How motorists can save money at the pump

Motorists can use the free fuel price apps and websites to shop around for the lowest prices on petrol. By shopping around for low prices, motorists send an important signal to retailers that they need to price their petrol competitively to get customers in the door.

“Cost of living pressures are high and petrol is a major purchase in weekly budgets. Motorists can manage this cost by using fuel price apps and websites to reward retailers offering the lowest price,” Mr Sims said.

“If retailers know that price is the number one consideration for consumers when choosing where to buy their petrol, it gives them a very clear incentive to be as competitive as possible with their pricing.”

Another important step motorists in the five largest cities can take is avoiding buying petrol at the peaks of the price cycle.

“For example, in Sydney, if motorists had avoided buying E10 on the six days around the price cycle peaks in the previous six months, they would have paid on average around 2.7 cpl less.”

“For an individual tank of petrol, this saving represents just a few dollars, but over the course of a year, the savings stack up. Assuming similar savings for the other types of petrol, the estimated overall savings for Sydney motorists over a year would be in the region of $95 million.”

Analysis of other large cities shows estimated savings in:

“The savings are even greater for those who fill up less frequently and therefore are able to buy petrol when prices are falling,” Mr Sims said

Motorists can access information about the price cycle to help time their purchases through a range of petrol price apps, or from the ACCC website, which is regularly updated with price cycle information including tips on when to buy petrol.

The ACCC has undertaken four regional petrol market studies in Darwin, Launceston, Armidale and Cairns and continues to monitor prices and margins in these locations.

“In all these locations, gross retail margins and prices continue to remain high. However it’s worth noting that prices in Cairns, while still high, are getting more competitive. This correlates with more vigorous competition following independent retailer United increasing its presence in the Cairns area,” Mr Sims said.

“This example demonstrates the value for consumers of having competition in petrol markets.”

On 20 December 2017, the Treasurer issued a new direction to the ACCC to monitor the prices, costs and profits relating to the supply of petroleum products and related services in the petroleum industry in Australia.

Under the new direction, the ACCC produces quarterly petrol monitoring reports focusing on price movements in the capital cities and over 190 regional locations across Australia. It also produces industry reports that focus on particular aspects of consumer interest in the fuel market in relation to prices, costs and profits. Today’s report was the fourth issued under the direction.

Gross retail margins are the difference between average retail prices and average wholesale prices. As they do not include costs, gross retail margins should not be confused with actual retail profits. These margins are averages across the five largest cities over time. The level of prices, costs and profits vary significantly between retail operations and not all petrol retailing sites will be achieving these margins. Some will be achieving higher margins, others lower. 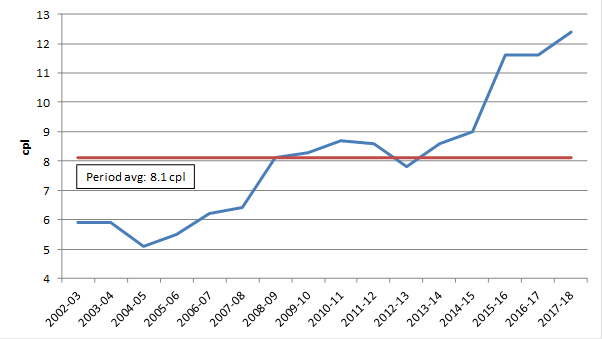 The analysis about savings from price cycles was not undertaken for Perth because it has regular weekly price cycles.