The Australian Competition and Consumer Commission’s annual Airport Monitoring Report has found that Sydney, Melbourne, Perth, and Brisbane airports all received an overall weighted rating of ‘good’ for their quality of service in 2015-16.

The report, Airport monitoring report 2015-16, found that both Brisbane and Perth airports were rated equal highest of the monitored airports within the ‘good’ category. These overall ratings are drawn from survey results (both airlines and passengers) and objective indicators.

“It is encouraging to see that all four airports made it into the “good” category for overall quality of service ratings this year, in addition to a second straight year of notable improvement by Perth Airport,” ACCC Chairman Rod Sims said.

“However, there is still room for the airports to better satisfy both passengers and airlines.”

The report also found that the airports are collecting substantially more aeronautical revenue per passenger than a decade ago. The higher average aeronautical charges have been used to both cover increasing costs per passenger and to grow profit margins.

“The ACCC estimates that over the past decade, these airports have collected $1.57 billion more in revenue from airlines than they would otherwise have collected if average prices were held constant in real terms,” Mr Sims said.

“Despite these much higher revenues per passenger, ratings of service quality are not materially different from those seen a decade ago.”

“The returns that the airports get on car parking show that they do not face significant competitive constraints when setting prices,” Mr Sims said.

However, the ACCC found that more consumers are taking advantage of substantial discounts when booking online for car parking, particularly for long-term parking.

“Booking online can deliver the best value car parking deals. In comparison, those who do not pre-book must pay drive-up prices which can be double that of online prices,” Mr Sims said.

The report also found that a combination of higher access charges and passenger growth had grown airport revenues from landside operators such as taxis, buses and off-airport carpark operators.

“Airports set the terms and prices to landside areas. This means that they are in a position to impede competition to on-airport car parking by increasing access costs for alternatives such as off-airport car park operators”, Mr Sims said.

“A second international airport competing with Sydney Airport will yield significant benefits to both consumers and airlines,” Mr Sims said.

“On the other hand, a common owner of the two airports would have an incentive to restrict investment and delay the new airport in order to maximise returns from its existing assets.”

“If Sydney Airport does not build and operate the new airport, the Government can build the airport and sell the assets once it is already established.”

The 2015-16 report, data tables and an infographic illustrating the key statistical findings can be found on the ACCC website.

Revenue per passenger is a useful proxy measure of average prices. Since 2006-07:

While revenue per passenger at Sydney Airport grew more slowly over this time, it has remained the highest of the airports at $17.27. These price increases over the past decade have resulted in significant additional payments by airlines.

Aeronautical activities remain very profitable for the airports in 2015-16. While aeronautical profit margins decreased at three of the monitored airports, the profit earned from a dollar of aeronautical revenue during 2015-16 ranged from a low of 33.5 cents at Perth Airport to a high of 46.7 at Sydney Airport. Profit is calculated using earnings before interest, tax and amortisation (EBITA).

The ACCC derives its quality of service information from responses to surveys of passengers, airlines and landside operators (such as off‑airport car parking operators, buses and taxis), as well as from objective data from the monitored airports. The ‘overall average quality of service’ measure is calculated as an average of these ratings (excluding responses from landside operators).

Comparisons between airports should be treated with caution because results can be affected by factors such as different terminal configurations, passenger mix, and different approaches to valuing assets.

The ACCC’s monitoring role does not involve the economic regulation of monitored airports or any power to intervene in the airports’ setting of terms and conditions of access to infrastructure. 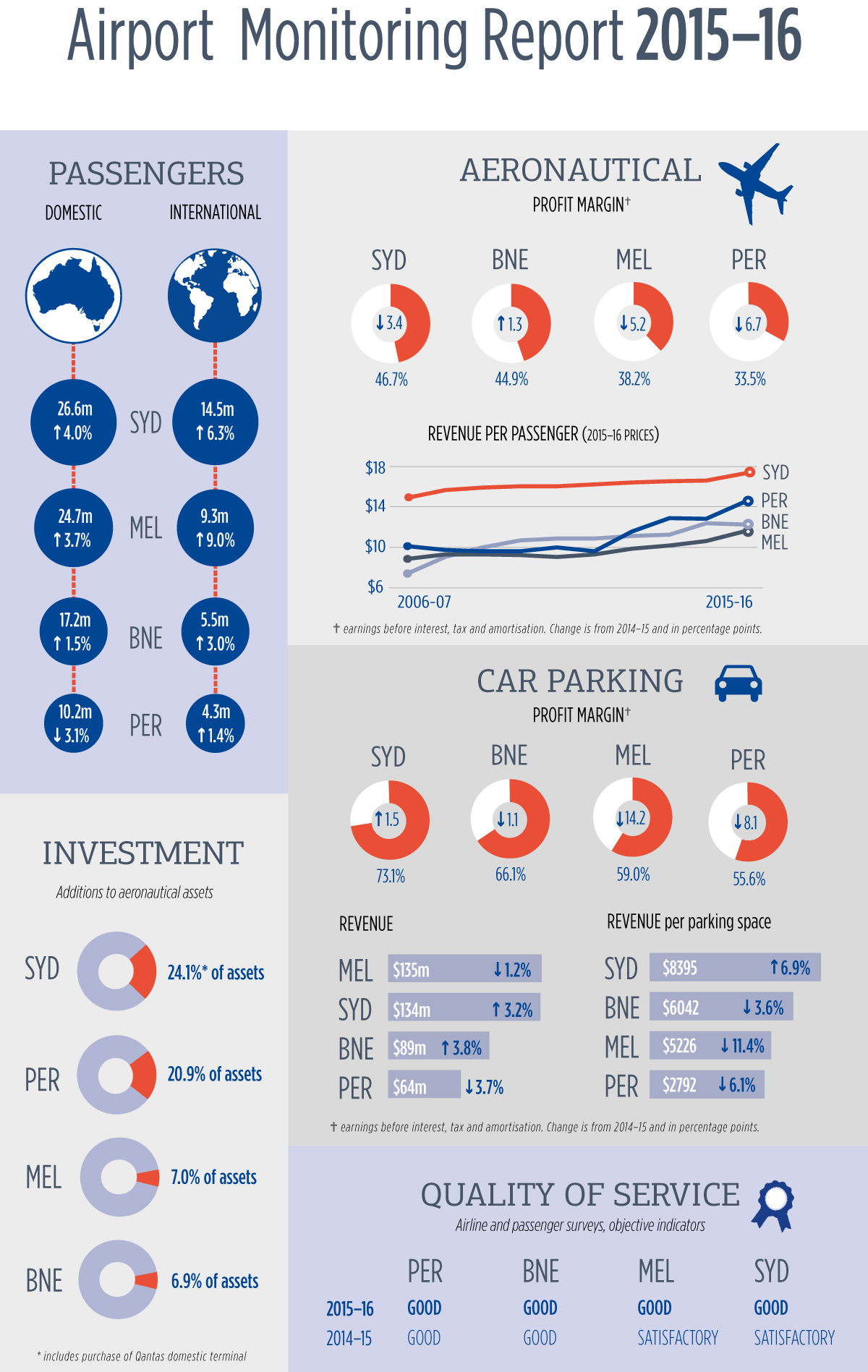