Average retail petrol prices in Sydney, Melbourne, Brisbane, Adelaide and Perth fell slightly in the quarter ending September 2019, due to a drop in international oil prices and a reduction in gross retail margins.

Petrol prices would have been lower were it not for a weaker Australian dollar.

According to the ACCC’s latest quarterly petrol monitoring report the average retail price in the five largest cities was 142.1 cents per litre (cpl), a drop of 3.2 cpl on the June quarter.

The report found the attack on Saudi Arabian oil facilities on 14 September only temporarily affected international oil prices and, by the end of September, they had returned to their pre-attack levels. This was primarily due to Saudi Arabia supplying oil from reserves and the potential of increased supply from the US.

“The US is now the world’s largest crude oil producer, and can increase its shale oil supply relatively quickly when needed. This means that incidents like the recent Saudi attack may not have as big an impact on international crude oil prices as they would have in the past,” said ACCC Chair Rod Sims.

Brisbane usually has the highest average price of the five largest cities, but in the September quarter it came second after Adelaide. The report notes that in the year to September 2019, Brisbane retail prices were on average 2.0 cpl higher than the average across the other four largest cities, which was significantly lower than a year earlier (3.6 cpl).

The relative decrease in Brisbane prices over the past year may have been influenced by a recent large increase in the number of retail sites in Brisbane. The introduction of the fuel price transparency trial in Queensland in December 2018 may have also had some influence.

In Darwin, average petrol prices in the September quarter were 3.0 cpl below the average in the five largest cities, continuing a trend since February 2019, and since July they have been below a calculated long-term competitive cost-based price.

“The relatively low petrol price in Darwin is good news to local drivers. The drop in Darwin’s prices may have been influenced by a change in the price setter at Coles Express retail sites from Coles Express to Viva Energy and FuelXpress opening a new retail site in Palmerston,” Mr Sims said.

For most of the September quarter, daily average prices in the five largest cities fluctuated in a band between around 135.0 cpl and 145.0 cpl, though this increased to 152.8 cpl due to the Saudi attack towards the end of the quarter.

Retail prices continued to increase in early October to around 155.0 cpl before decreasing to around 145.0 cpl in mid-October, and rising again to around 156.0 cpl at the end of October. These price movements were influenced by changes in wholesale prices and the state of the petrol price cycle in some cities. 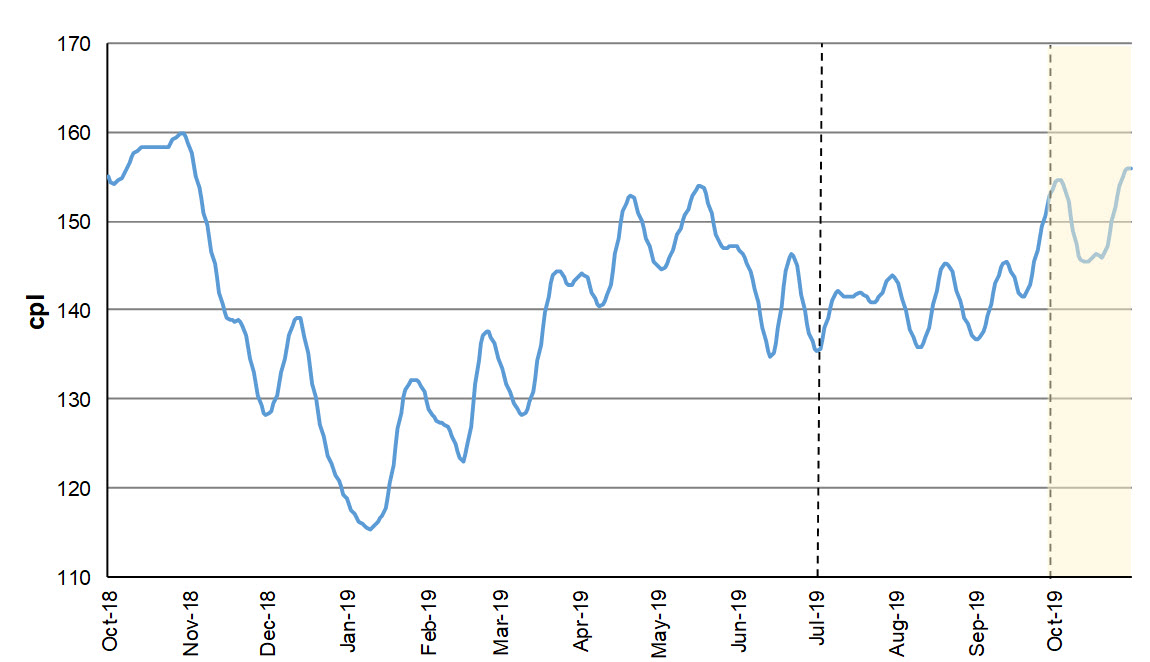 On 20 December 2017, the then Treasurer issued a Direction to the ACCC to monitor the prices, costs and profits relating to the supply of petroleum products and related services in the petroleum industry in Australia.

Under the Direction, the ACCC produces quarterly petrol monitoring reports focusing on price movements in the capital cities and over 190 regional locations across Australia. It also produces industry reports that focus on particular aspects of consumer interest in the fuel market in relation to prices, costs and profits.

Notes to the chart