New initiative aims to keep scams out of Indigenous communities

The ACCC and state and territory consumer affairs agencies have today launched a new scams awareness initiative called ‘Too good to be true’, and will work with Indigenous communities on ways to identify and avoid scammers.

The project is being managed under the National Indigenous Consumer Strategy (NICS), and is aimed at engaging, educating and empowering Indigenous consumers to stay one step ahead of scammers.

“Prevention is the most effective defence against scammers. As part of this initiative, we will meet with Indigenous Australians in their communities to hear about their experiences with scams and explore ways on how to empower them against scam conduct in their community,” ACCC Deputy Chair Delia Rickard said.

In 2018 so far, the ACCC’s Scamwatch website has received more than 1,800 reports of scams from people identifying as Indigenous, with losses of almost $3 million. The most common scams affecting Indigenous Australians are phishing, unexpected prize and lottery scams and identity theft.

“Scammers are usually after your money and your personal information and can get quite aggressive and threatening if you don’t give it to them,” Ms Rickard said.

“We’ve seen countless examples of people being threatened with arrest if they don’t comply. It can be terrifying for victims.”

“Scammers spin very sophisticated lies so if someone contacts you out of the blue requesting personal information, you should be really suspicious about it being a scam,”  Ms Rickard said.

NICS is also launching a new ‘too good to be true’ magnet and running a social media campaign to spread the word about avoiding scams.

“Scams can have devastating effects on people’s lives. This is an important opportunity for us to hear about Indigenous Australian’s concerns about scams and arm them with the information they need to keep their friends and family safe from scammers,” Ms Rickard said.

More information about identifying and avoiding scams is available at www.scamwatch.gov.au.

A sample of the magnets: 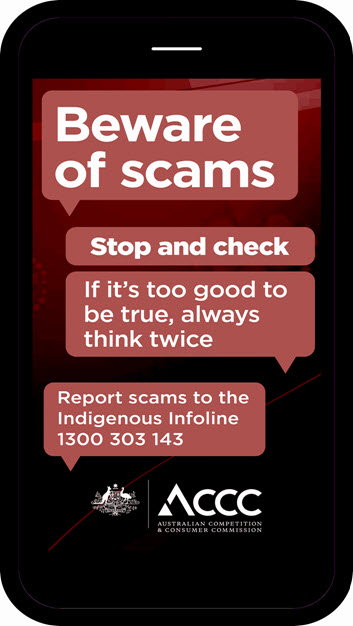