From 29 April 2018, Kleenheat advertised that new customers in Western Australia could “Save 35% on gas charges” by switching to its Monthly Energiser Plan.

The ACCC alleged that this representation was false and misleading because the discount only applied to a customer’s gas usage charges (but not to other charges, like the gas supply charge or account fee).

The ACCC also alleged that the overall impression created by the advertisements was that the discount would apply while the consumer remained a customer, when in fact the discount only applied for 12 months, after which it dropped to 25 per cent.

These advertisements appeared on television, radio, Facebook, Spotify, billboards, bus panels and emails. Some advertisements contained a reference that “Ts &Cs apply” while others included references in fine print explaining the deal.

Kleenheat is Western Australia’s second largest gas retailer, and thousands of customers took up the Monthly Energiser Plan after the advertisements, which have now been withdrawn.

“The ACCC alleges that Kleenheat made representations to potential customers which were false and may have caused some people to switch their account to Kleenheat from other gas suppliers,” ACCC Acting Chair Roger Featherston said.

“WA gas customers who saw the Kleenheat advertisements could easily have assumed the discount was permanent and applied to the entire bill. People who took up the plan saved about $40 less in the first year than they would have saved relying on Kleenheat’s claim of a 35 per cent saving on gas charges.”

“Qualifications which explain the terms and conditions of a deal must be prominent and not only in fine print, so that consumers understand what the deal involves,” Mr Featherston said. 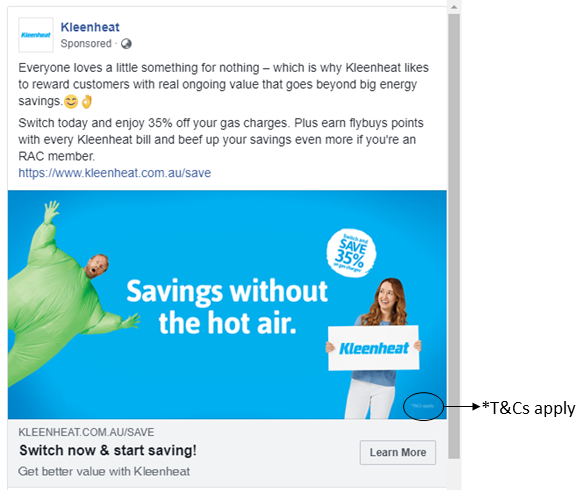