The ACCC is currently conducting inquiries into both the affordability of retail electricity, and gas market supply and demand.

“We at the ACCC have been sounding the alarm in relation to business energy costs for some time. It is great that there is now considerable focus on this issue,” ACCC Chairman Rod Sims said.

“Moratoria and other regulatory restrictions in New South Wales, Victoria and Tasmania are preventing or impeding onshore gas exploration and development in those states, and particularly causing higher gas prices in the south,” Mr Sims said.

“The rules never envisaged a generation market as concentrated as what we now have. In each state the combined market shares of the two or three most significant generators is well over 70 per cent, sometimes much higher.”

Mr Sims highlighted a number of affordability concerns across the retail, green, generation and network segments and said the ACCC would now focus on a range of affordability measures (see chart below).

“We are told we have three issues to deal with in electricity: reliability, sustainability and affordability. Basic economics says with three problems you need three different solutions. Beware of ‘silver bullets’ that are said to address all three objectives,” Mr Sims said.

Mr Sims’ address to the National Press Club is available at: Shining a light: Australia’s gas and electricity affordability problem 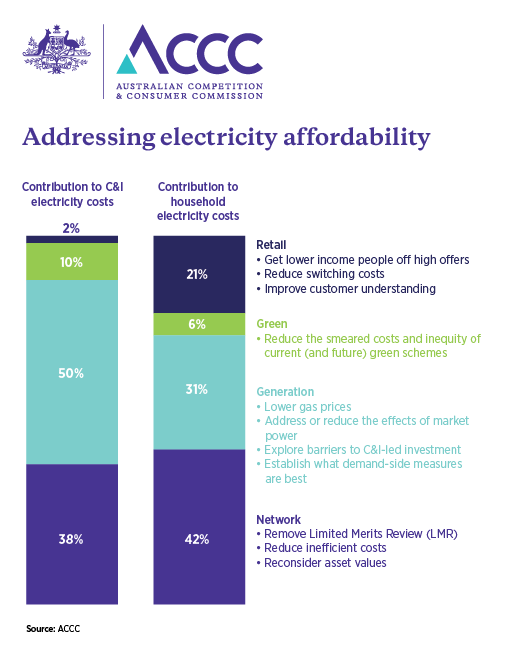 The ACCC retail electricity inquiry is investigating the nature of competition, the representation of prices to consumers, and other factors influencing the prices paid by Australians for electricity. The inquiry into retail electricity prices is required to produce a preliminary report to the Treasurer by 27 September 2017. A final report is due by 30 June 2018.

The ACCC gas inquiry is examining the supply and demand of wholesale gas in Australia, including the pricing, volume and availability of gas for domestic supply and export. The ACCC will provide six-monthly reports on gas market transparency measures, in addition to publishing more regular information as appropriate. The first report is due in October 2017