Streamotion Pty Ltd, trading as Kayo Sports (Kayo), has paid a penalty of $12,600 after the ACCC issued an infringement notice for allegedly misleading consumers about their eligibility for a subscription offer.

From 14 March to 3 April 2019, Kayo’s website promoted its Basic Subscription Package to Telstra customers for the price of ‘2 months for $5’.

The ACCC alleges the offer on Kayo’s website was false or misleading, in breach of the Australian Consumer Law.

“We were concerned that Kayo’s website did not adequately disclose the offer was only available to Telstra customers who had not previously used Kayo,” ACCC Deputy Chair Delia Rickard said.

“The eligibility requirement appeared in small print on Kayo’s website and was significantly less prominent than the headline offer.”

“Under the Australian Consumer Law, businesses must ensure that qualifications or restrictions on any deal or promotion are made clear to consumers,” Ms Rickard said.

“This means they must be prominent and not hidden in the fine print.”

Some Telstra customers, who had used Kayo before, took up the offer and were charged $25 rather than $2.50 for the first month.

Kayo supplies a sports streaming service which enables customers to stream a range of sports live and on demand and was launched in Australia on 26 November 2018.

The ACCC's concerns relate to Kayo's representation on its website between 14 March 2019 and 3 April 2019, after which Kayo amended the website to more clearly disclose the eligibility requirement.

The ACCC can issue an infringement notice where it has reasonable grounds to believe a person or business has contravened certain consumer protection laws.

Alleged misleading offer which appeared on the Kayo website at kayosports.com.au 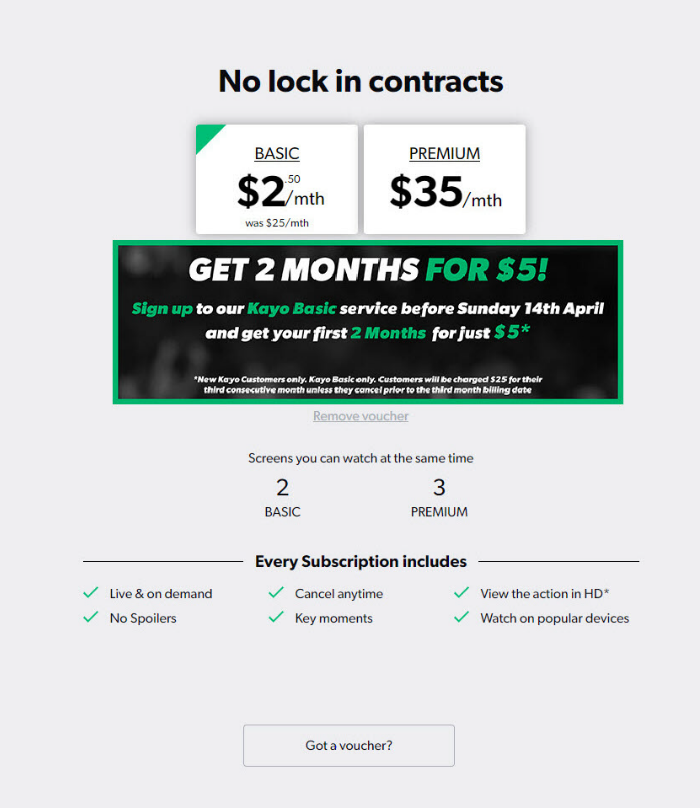