The average annual bill for households in the National Electricity Market fell in 2018–19 compared with the previous year, by $65 or 4 per cent, the latest ACCC electricity markets report has found.

“There is still work to be done to make electricity more affordable for households,” ACCC Chair Rod Sims said.

“We continue to seek action on our previous recommendations, which we believe will help drive bills down.”

Environmental costs have been the biggest driving factor behind the increase in average household bills over the longer term, due to federal and state government policies aimed at encouraging greater uptake of renewable generation, promoting energy efficiency and reducing carbon emissions. Customers with solar panels made up about 16 per cent of all residential customers in the National Electricity Market (NEM) in 2018-19, compared to 0.2 per cent in 2007-08.

Many of these policies, such as premium Feed-in Tariff (FiT) rebates, result in additional costs for retailers that ultimately flow through to customers’ electricity bills, unless funded through other means. The costs of such schemes accounted for $103 or 41 per cent of the long-term increase in household bills between 2007–08 and 2018–19. 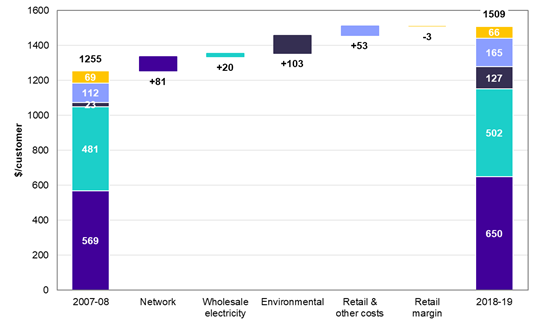 For example, the average household pays about $550 a year (or 9.4 cents per kWh) more than a household with solar panels, a situation the ACCC believes raises significant questions about fairness.

“The cost of installing solar panels has reduced significantly in recent years, so environmental schemes like the premium FiT rebates are no longer needed to make solar an attractive option for those households that can afford it,” Mr Sims said.

“Indeed, all customers who can, should consider how much they could save by installing solar panels.”

“We are primarily concerned about the additional costs such schemes have imposed on households that cannot access or afford to install solar panels,” Mr Sims said.

“Funding environmental schemes through government budgets rather than through increased electricity charges should also be considered as a more equitable option.”

Reforms to retailer pricing from 1 July 2019 are expected to be benefitting about 900,000 customers on default electricity plans in South Australia, NSW, south-east Queensland and Victoria, with those consumers receiving automatic reductions in their prices.

“Households on default plans in South Australia, NSW, south-east Queensland and Victoria are estimated to save between $152 and $455 in 2019–20, depending on their state and distribution zone,” Mr Sims said.

“Small business customers on default plans in South Australia, NSW and south-east Queensland are also expected to see reductions in their annual bills, estimated at between $510 and $980.”

However, the majority of customers are on market plans rather than default electricity plans. While the reforms do not impose any requirement on retailers to lower those prices, the highest priced market offers available have also come down since June 2019. Most market offers are now cheaper than default electricity plans, with additional savings on offer for those consumers able to shop around.

The ACCC estimates that households in South Australia, NSW and south-east Queensland could save between $160 and $230 a year by switching from a default plan to a median priced market offer. For small business customers in these regions, the potential annual savings are between $720 and $1155.

In Victoria, the ACCC estimates that households could save between $55 and $75 a year by switching from a default plan to a median priced market offer.

“Households can find an even better deal by shopping around and looking at the offers of some of the smaller retailers in the market,” Mr Sims said. 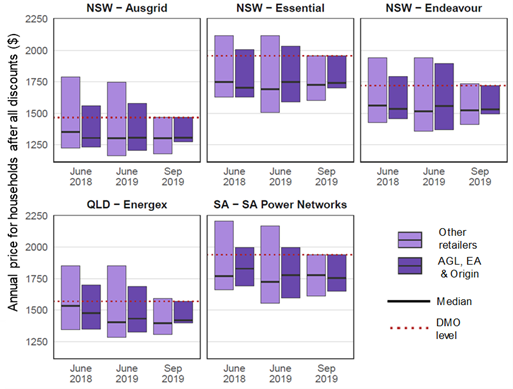 In August 2018, the then Treasurer, the Hon Scott Morrison MP, directed the ACCC to hold an inquiry into the prices, profits and margins in relation to the supply of electricity in the NEM. This is the third report in this inquiry, and follows from the reports provided to the Government in March and August 2019.

The focus of this report is on customer outcomes in the 2018–19 financial year based on an analysis of cost data obtained from electricity retailers.

‘Cost stacks’, which show the various cost components of customers’ bills and how they are changing over time, provide valuable insights into the factors that are most influencing customer outcomes and where additional policy focus may be needed. This report also analyses how the pricing of electricity plans on offer have changed in the short time since reforms to retailer pricing and advertising came into effect on 1 July 2019.

The ACCC is required to report at least every 6 months. The next report is scheduled for May 2020.