Flight Centre pays $252,000 in penalties for Christmas and Easter promotions

Flight Centre advertised promotions in store and in print newspapers offering $250 vouchers to consumers who spent $1500 on a holiday package with Flight Centre. The vouchers were redeemable on their next holiday booked through Flight Centre.

The ACCC had grounds to believe that these advertisements were liable to mislead, and breached the Australian Consumer Law because Flight Centre failed to disclose to consumers that redeeming the $250 voucher was subject to certain conditions. These conditions included requiring consumers to book another holiday with Flight Centre worth more than $5000.

The ACCC was also concerned about the limited time frame offered for consumers to redeem the voucher, which also wasn’t properly disclosed to consumers.

“We are concerned that consumers were enticed to purchase their holiday through Flight Centre to obtain a voucher they were not able to use without spending another $5000, when this was not adequately disclosed,” ACCC Commissioner Sarah Court said.

Over 35,000 consumers received cash vouchers as part of these promotions.

“Businesses are warned that the terms and conditions of any deal or promotion must be prominent, so that consumers understand what is involved in redeeming the offer,” Ms Court said.

The ACCC can issue an infringement notice where it has reasonable grounds to believe a person has contravened certain consumer protection laws.

A sample of Flight Centre’s 2018 Christmas promotion is below. 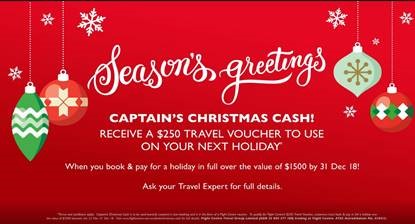