New roadside signage in the Aboriginal community of Cherbourg in southern Queensland is reminding door-to-door traders about their legal obligations under the Australian Consumer Law.

The community today launched the ‘Do Not Knock informed’ communities program, a joint initiative between the Cherbourg Aboriginal Shire Council, the ACCC and the Queensland Office of Fair Trading (QOFT).

The signage, located at the entrance to Cherbourg, reminds door-to-door traders that they must not approach houses displaying do-not-knock notices.

“The ACCC is committed to partnering with Indigenous communities so residents feel empowered around their consumer rights, and it’s fantastic to see the Cherbourg community institute this program,” ACCC Deputy Chair Delia Rickard said.

Cherbourg will become the sixth Do Not Knock informed town with others being Wujal Wujal, Palm Island, Hope Vale, Yarrabah and Woorabinda.

“Wujal Wujal was the first Do Not Knock informed community and have since advised us the signage has resulted in a significant reduction in the number of door-to-door traders visiting that community. Community members are also more inclined to enforce their consumer rights,” Ms Rickard added.

The ACCC has a dedicated Indigenous information line that consumers can use to report instances of unlawful door-to-door trade.

QOFT Acting Executive Director Craig Turner said the Do Not Knock initiative protects remote communities by giving residents information about the power they have to ‘opt out’ of receiving door-to-door approaches, and how to get help when this law is broken.

“If the salesperson refuses to leave call the police, or if you think they are trying to rip you off, please let the OFT know so we can take action and warn others,” Mr Turner said.

In addition to unveiling the new community signage, a community information morning is also being held to empower Cherbourg residents to enforce their consumer rights. 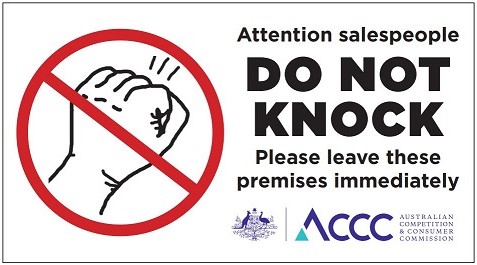 While door-to-door sales are legal, the ACL sets out rules and obligations that must be followed, including providing consumers clear written contracts, giving a ten-business day cooling-off period, abiding by permitted hours of trade and not approaching any residence displaying a do-not-knock notice.

Free ‘Do Not Knock’ stickers or signs are available from the QOFT.

More information on consumer rights is available from www.accc.gov.au or www.qld.gov.au/fairtrading. Indigenous consumers can also call the ACCC’s dedicated Indigenous Infoline on 1300 303 143.

The expansion of the Do Not Knock informed communities program into Cherbourg brings the total number of communities to six after the successful pilot in Wujal Wujal, in far north Queensland, in 2016.