The ACCC will be producing at least eight reports in 2015, of two types:

The quarterly reports will cover fuel price movements in all capital cities and around 180 regional locations and will examine issues including: the drivers of petrol prices (i.e. international refined petrol prices, terminal gate prices and the AUD-USD exchange rate), petrol price cycles, and gross indicative retail differences in the five largest cities.

“The first quarterly report will be released in February. These quarterly reports could, for example, focus on the lags between international refined petrol price movements and changes in retail petrol prices in both the larger capital cities and in regional locations,” Mr Sims said.

International fuel prices have historically been volatile, reflecting factors such as geopolitical unrest, swings in global economic sentiment and significant oil finds as well as the activity of OPEC, the international oil cartel.

Between the beginning of July 2014 and early January 2015 the average wholesale price of regular unleaded petrol in the five largest cities (i.e. Sydney, Melbourne, Brisbane Adelaide and Perth) decreased by around 35 cents per litre (cpl). Over the same period, average retail petrol prices in these cities decreased by around 38 cpl. The larger fall in retail prices may have been influenced by the absence of regular price cycle movements in some of these cities.

In July 2014 the monthly average retail price of petrol across regional locations in Australia was 5.7 cpl higher than prices in the five largest cities. By December 2014 this difference had increased to 17.6 cpl.

“Motorists in our larger capital cities have therefore seen the benefit of lower international prices but consumers in a number of regional locations have not. While lags are expected, as older stocks can take longer to run down in regional locations, we would expect the falls to be passed on reasonably quickly.”

Mr Sims said that there seemed to be pricing anomalies in some regional centres.

“To take an example from each state and territory, when you look at Kalgoorlie, Coffs Harbour, Toowoomba, Port Augusta, Devonport, Benalla, Alice Springs and Canberra, petrol price reductions do not seem to have followed the decrease in international prices as much as consumers would expect.” These can be seen in the graphs below.

“This highlights the importance of the ACCC’s new petrol market studies.”

The ACCC will be producing at least four market studies a year, which will include analysing the drivers of petrol prices in particular regional markets.

“We will look at three regional locations closely this year to understand their level of petrol prices in more detail,” Mr Sims said.

“The studies will look at the cost of fuel in the nearest port, transport and storage costs, as well as wholesale, distribution, and retail costs to fully explain prices and where money is being made in the petrol price value chain.”

The ACCC will rely on its compulsory information gathering powers under Section 95ZK of the Act which were activated with the Ministerial direction, when conducting these micro market studies.

“We acknowledge that complying with these notices can be a burden for businesses but this is the only way to uncover what is going on with petrol prices in specific regional locations,” Mr Sims said.

“We will only name the regional locations to be studied in this way once the compulsory notices have been issued. Otherwise we run the risk that market behaviours change before our study begins.”

“We expect to identify the three regional locations to be studied in the coming months, with the first to be announced in March. The reports will be delivered progressively throughout the year.”

There are a number of possible outcomes from these studies.

The ACCC could find cartel or other anti-competitive activity that breaches the Act. It is important to note that the ACCC has not found evidence that can be put before a court of any such breaches in several investigations into petrol markets it has conducted previously.

“Alternatively, we may find behaviour that the community considers inappropriate that is not a breach of the Act. Even if no breaches are found, the ACCC believes such studies can play an important role as they can shine a light on specific markets where prices are relatively high. Such exposure can influence behaviour as consumers can see where the money is being made and seek appropriate change,” Mr Sims said.

“Fuel producers can either respond or face a consumer backlash or even a government response if the market is not behaving as a competitive market should. It may be, for example, that barriers to new entry are too high, or that there is a lack of independent market participants.”

The ACCC understands that many regional communities want to be the first target of these market studies. Given the nature of the in-depth studies however, only three can be done in any year.

Mr Sims emphasised that each of the studies will have wider implications.

“After the three market studies into particular regional regions we will be able to draw lessons of wider relevance to other regional markets. We may find consumers and local authorities in all regional areas will have a better ability to understand what drives their fuel prices,” Mr Sims said.

Apart from the regional market analysis, the market studies will examine issues such as premium unleaded petrol margins, changes in the nature of the retail price cycles in the larger cities and significant changes in the Australian fuel industry.

The ACCC’s new petrol direction follows on from its recent action in relation to fuel shopper dockets and petrol price information sharing, which the ACCC alleges can have the effect of raising the general level of petrol prices.

“This action is important as each extra cent per litre on petrol costs Australian consumers close to $200m per year,” Mr Sims said.

International fuel prices have historically been volatile, reflecting factors such as geopolitical unrest, swings in global economic sentiment and significant oil finds as well as the activity of OPEC, the international oil cartel. Throughout the 1990s, for example, oil prices were generally below $US 40 per barrel in today’s prices, which is below current levels.

The ACCC is hopeful the influence of OPEC will decline further so that international market forces can be the main determinant of petrol prices.

On 17 December 2007, Minister Bowen directed the ACCC, under section 95ZE of the Act, to formally monitor prices, costs and profits relating to the supply of unleaded petrol products in the petroleum industry in Australia.

This direction was extended annually with the seventh and final annual report released in December 2014.

On 9 December 2014, Minister Billson directed the ACCC to monitor the prices costs and profits relating to the supply of unleaded petroleum products and report at least quarterly for a period of three years.

The charts below show seven-day rolling average retail petrol prices in particular region allocations compared with the average price across the five largest cities (i.e. Sydney, Melbourne, Brisbane, Adelaide and Perth) for the period July to December 2014. The ACCC uses seven-day rolling average prices to smooth out the influence of price cycles in the larger capital cities. The charts also provide information on the monthly average difference between these two prices in July 2014 and December 2014 and the annual average difference in 2013-14. The source for all charts is ACCC calculations based on FUELtrac data. 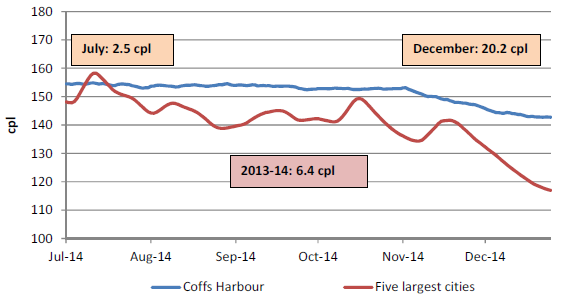 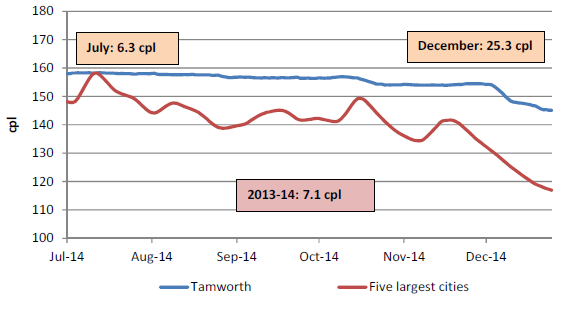 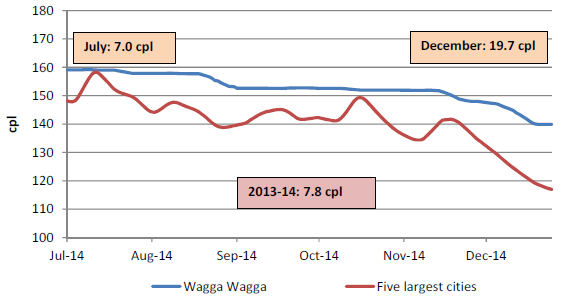 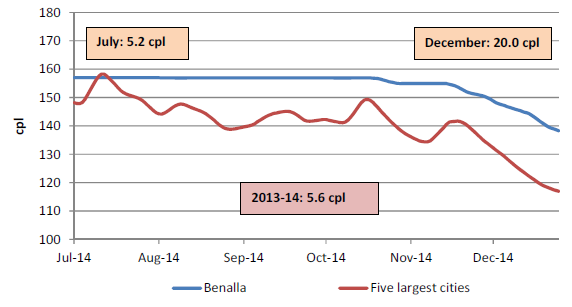 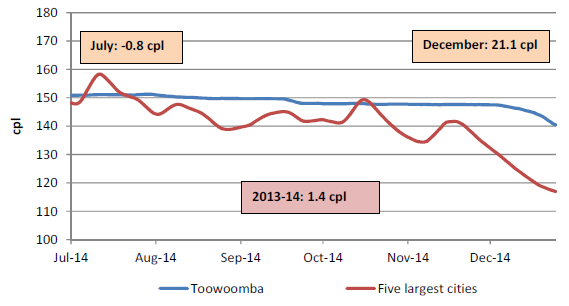 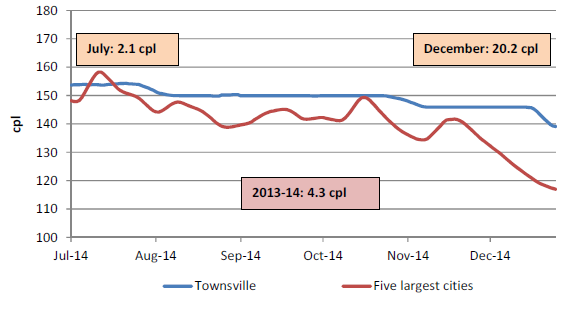 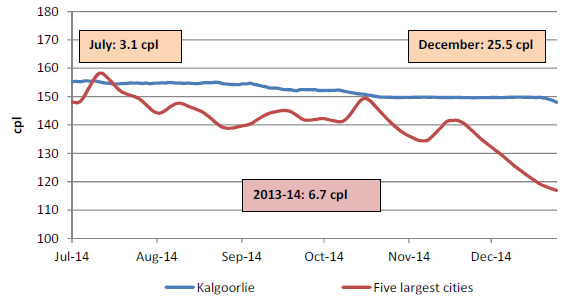 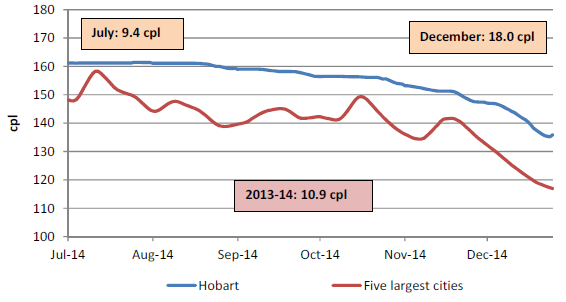 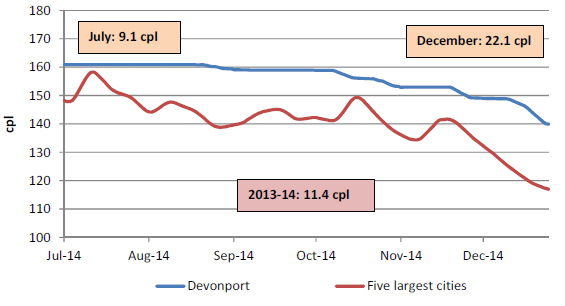 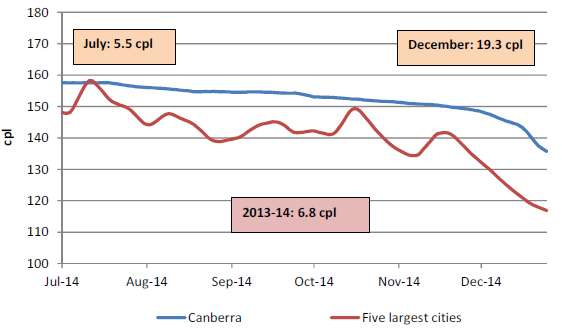 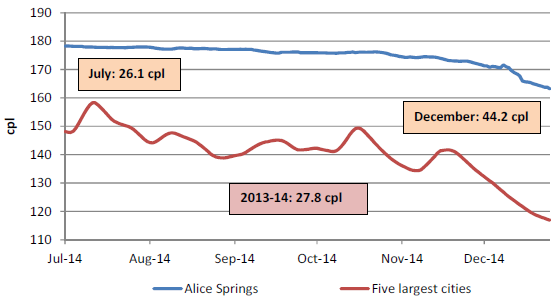 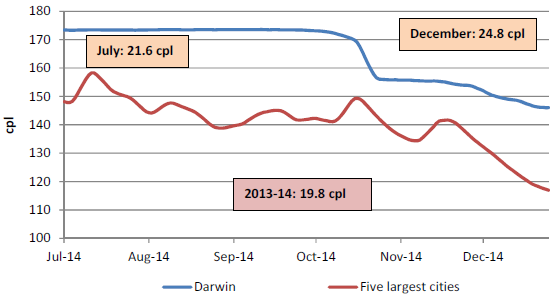