The Australian Competition and Consumer Commission has released its fourth quarterly report into the Australian petroleum industry for 2015. The report examines petrol prices up to September 2015.

The average retail petrol price in the five largest cities (i.e. Sydney, Melbourne, Brisbane, Adelaide and Perth) was 133.2 cents per litre (cpl) in the September quarter, down 2.6 cpl from the June quarter (135.8 cpl). The decrease followed falls in international crude oil and refined petrol prices.

“Retail petrol prices did not fall by as much as international prices, in part due to a weaker Australian dollar,” ACCC Chairman Rod Sims said.

“The exchange rate can have a huge impact on prices at the pump. For instance, if the AUD–USD exchange rate was at the same level as it was in January 2013 (USD 1.05), retail petrol prices in the September quarter 2015 would have been around 20 cpl lower.”

The report also shows that gross retail margins (or GIRDs) in the September quarter were at their highest level since the ACCC began monitoring in 2002. Average GIRDs in the five largest cities were 11.8 cpl, an increase of 1.3 cpl from the June quarter.

Sydney and Brisbane had the highest GIRDs in the September quarter, at around 14 cpl.

“Gross retail margins in Sydney and Brisbane were 6 cpl higher than in Melbourne,” Mr Sims said.

“In fact, margins in Brisbane have been consistently higher than in the other major cities in recent years. We will be closely monitoring gross retail margins in the coming months, because high retail margins likely indicate increased profits of the petrol companies at the expense of motorists.” 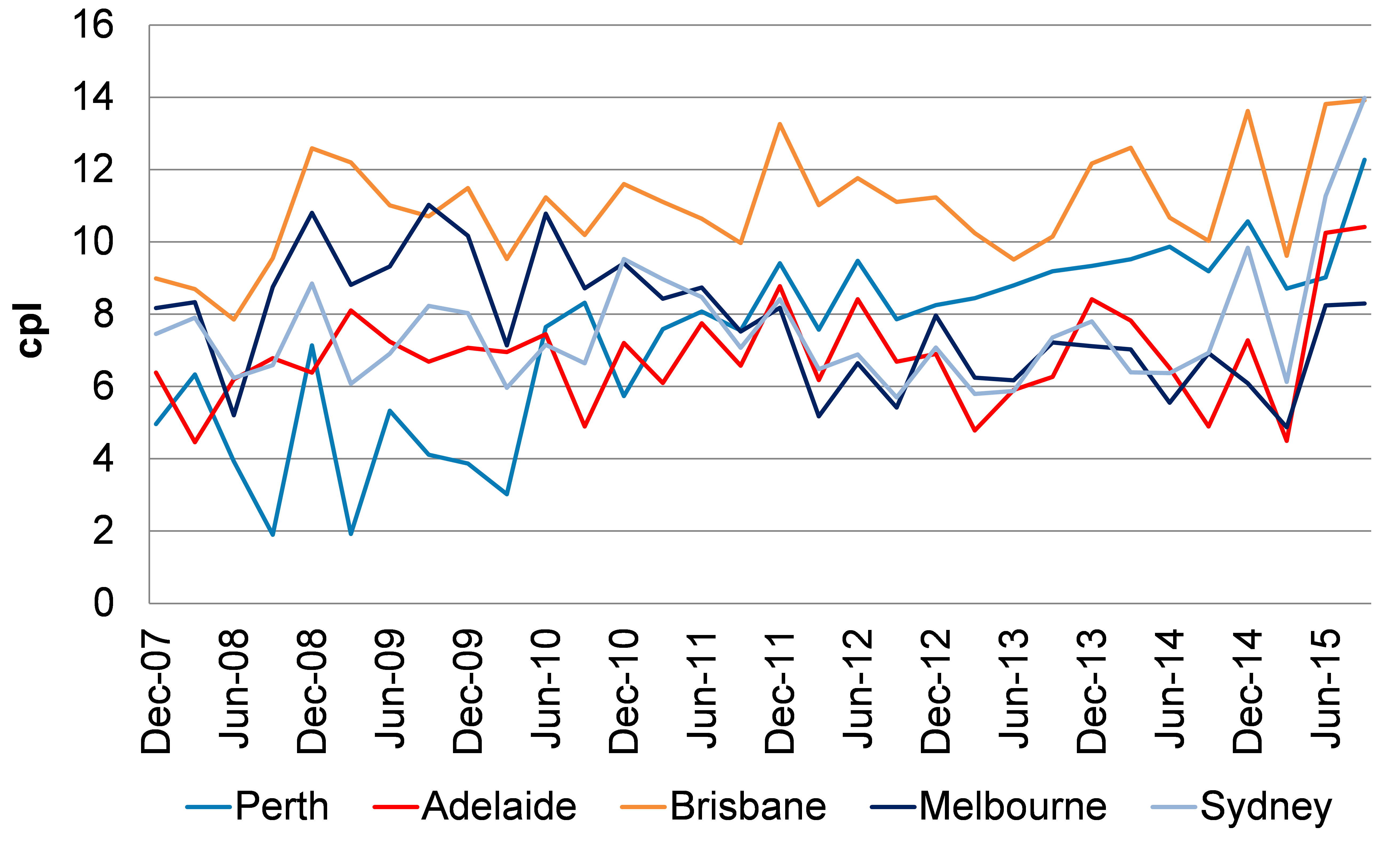 During the quarter the differential between retail petrol prices in regional locations and in the five largest cities increased from 0.7 cpl in June 2015 to 5.3 cpl in September 2015. This was well below the peak differential of 17.6 cpl in January 2015.

“The very high differential we saw in late 2014 and early 2015 was a result of regional prices being slow to fall following large decreases in international prices,” Mr Sims said.

“In contrast, the very low differential in June 2015 was due to prices in regional locations being slow to rise following a large rebound in international prices. We are now seeing the differential return to a point more in line with historical levels.”

Mr Sims also noted some of the work being done by the ACCC into petrol markets in regional locations.

“The ACCC has recently released its report into the Darwin petrol market. The report found that high prices in Darwin in recent years added around $9 million per year to the petrol bill for Darwin motorists. The report also found that net profit per site in Darwin was extremely high, at around $1.2 million per site in 2013–14. This was significantly higher than in Adelaide, where net profit per site for most of the same companies ranged from $100 000 to $200 000.”

The report found that in 2013–14 annual average petrol prices in Darwin were around 170 cpl, among the highest in Australia.

“The higher prices and profits in Darwin were evidence of weak retail competition,” Mr Sims said.

The ACCC identified steps that could be taken to increase transparency and promote effective competition in the Darwin market. These include regular publication of prices and margins and benchmarking against other locations, and the promotion of effective new entrants into the market.

“We hope that the findings from the Darwin market study, as well as from future market studies, will provide a better understanding of why petrol prices in many regional locations are as high as they are,” Mr Sims said.

On 9 December 2014, then Minister Bruce Billson directed the ACCC to monitor the prices, costs and profits relating to the supply of unleaded petroleum products and report at least quarterly for a period of three years.

Under these arrangements the ACCC will produce two types of reports: