The Australian Competition and Consumer Commission has released the first quarterly report into the Australian petroleum industry for 2015.

The report covers the period from June to December with some additional information to end January 2015. The ACCC’s last annual monitoring report covered the period up to June 2014. This report follows Minister Bruce Billson’s direction in December 2014 to monitor and analyse fuel markets and report at least quarterly for a period of three years.

“The combined reduction in petrol prices of 42.7 cpl is unusual, and would be worth around $1000 per year to the average household if sustained,” said ACCC Chairman Rod Sims.

“However, petrol prices are volatile. Over half of the petrol price that Australians pay at the pump is due to the international price of fuel,” Mr Sims said.

“In mid-January this year, we highlighted that falling international oil prices had not flowed through fully to regional petrol prices.In June 2014 monthly average retail prices of petrol across regional locations in Australia were 5.4 cpl higher than prices in the five largest cities, close to the average for 2013-14; by December 2014 this differential had increased to 17.5 cents per litre. This differential remained at this level at the end of January. During January this differential increased in some of the 180 regional locations monitored by the ACCC, and decreased in others,” Mr Sims said.

“Retail petrol prices in the five largest cities started to increase in February 2015, so we would expect the differential to narrow in the remainder of the March quarter 2015. The ACCC will be monitoring this in the period ahead,” Mr Sims said.

The ACCC will conduct regional market studies to seek to explain both the size of the usual price differentials, as well as the slowness in passing through the international price falls. The first regional location will be announced soon.

“Part of the benefit of these studies will be to provide more transparency, and so empower consumers to make decisions about when and where to buy petrol. We believe consumer action can have an effect,” Mr Sims said.

“The ACCC already publishes information on fuel prices cycles in the five largest cities, with advice on when to buy petrol. There can be a 20 cents per litre gap between the top and bottom of the petrol price cycle.”

“One specific example of consumer focus has been the attention paid by consumers to the fall in nearby Caltex/ Woolworths petrol prices when a low priced Costco outlet in Canberra is open.”

“The market studies will bring even more transparency and focus and this can either bring about change, or inform consumers of when or where to buy their petrol,” Mr Sims said.

Finally the report shows that diesel and LPG prices have also fallen considerably, but not by as much as international prices.

Between June 2014 and January 2015 average monthly diesel prices in the five largest cities decreased by 25.0 cpl and automotive LPG prices decreased by 11.9 cpl.

In the short term, unlike petrol prices, retail diesel and automotive LPG prices tend to be less responsive to changes in international refined product prices.

The charts below show seven-day rolling average retail petrol prices in particular regional locations compared with the average price across the five largest cities (i.e. Sydney, Melbourne, Brisbane, Adelaide and Perth) for the period 1 July to 31 January 2015. The ACCC uses seven-day rolling average prices to smooth out the influence of price cycles in the larger capital cities. The charts also provide information on the monthly average difference between these two prices in July 2014, December 2014, January 2015 and the annual average difference in 2013-14. The source for all charts is ACCC calculations based on FUELtrac data. 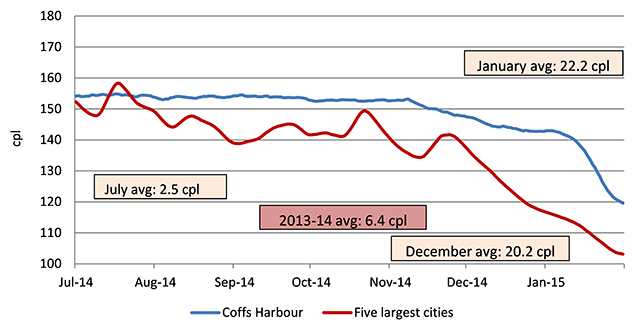 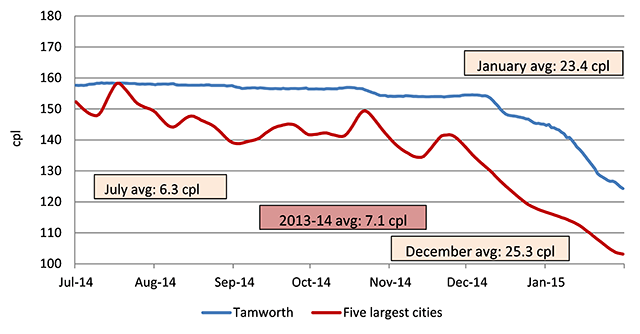 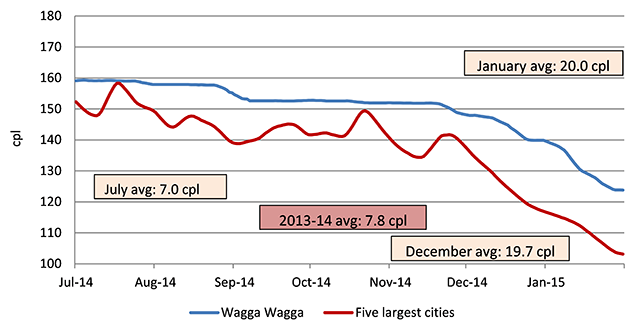 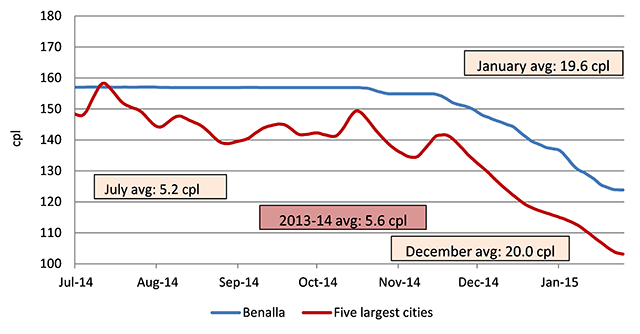 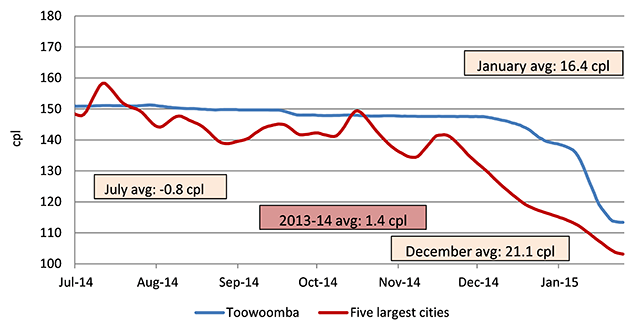 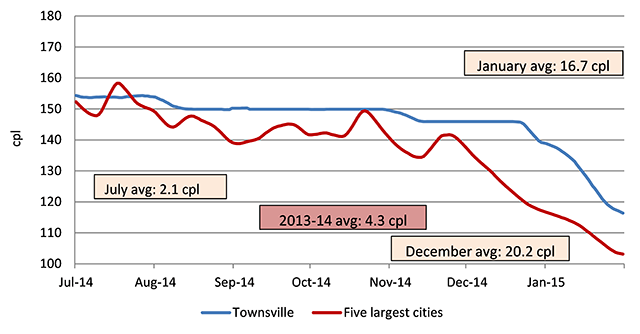 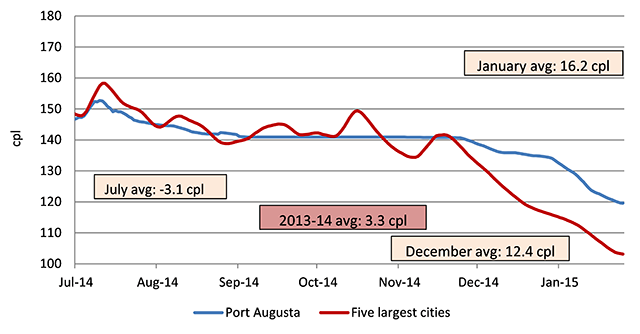 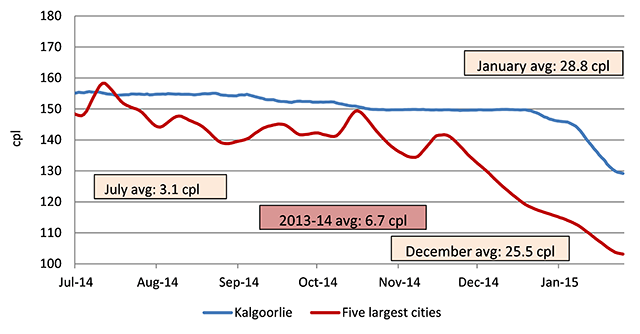 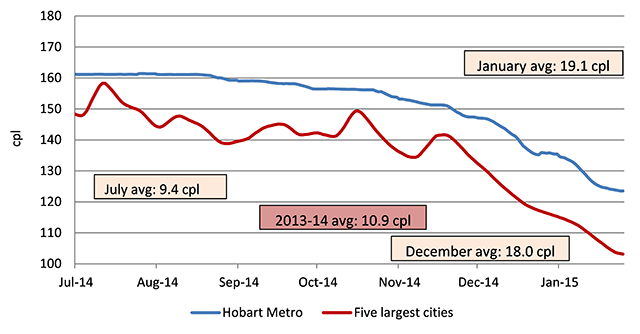 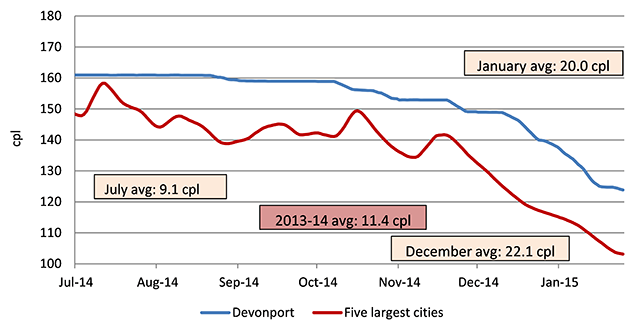 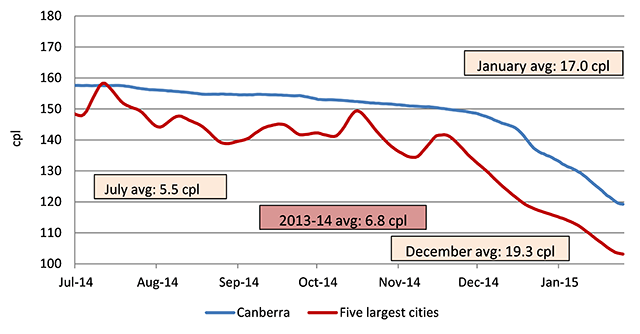 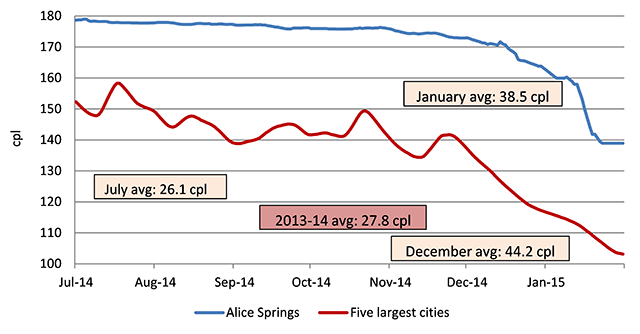 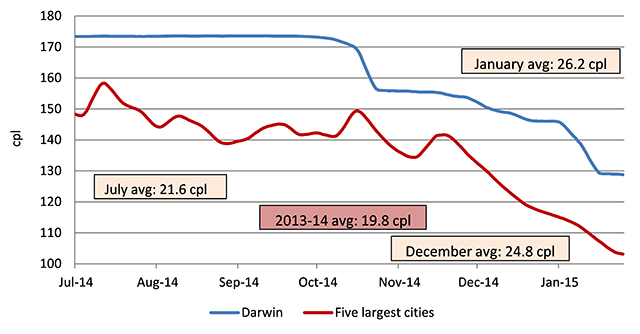