Traders have responsibilities under the Horticulture Code of Conduct to report to growers.

What is reported depends on whether the trader is an agent or merchant.

Horticulture produce agreements must state the reporting period. This is the period that the trader – as an agent or merchant – is required to report to the grower. The reporting period can be, for example, monthly or quarterly.

Following the end of a reporting period, the trader must provide a statement to growers within a specified period (the statement period).

Penalties may apply if a trader doesn’t give a statement to each grower they deal with.

Information to include in the statement to growers

The statement to growers includes information to help the grower understand the reasons for the price of their produce and to see factors in the supply chain that impact price.

Statements from the agent to grower

The statement from the agent tells the grower the:

It also lists any unsold produce during the reporting period. This includes:

Statements from the merchant to grower

The statement from the merchant tells the grower the:

If the price for the produce was determined by a method or formula, the statement must also detail:

Traders must keep a copy of their statements for at least 6 years after they give them to the grower. For more information, see Record keeping under the horticulture code.

On 6 March, Joan delivered 100 boxes of oranges to Fruit Buyers Pty Ltd, and 100 boxes of pears on 10 March. One box of pears was destroyed and all other produce was sold by the end of March.

To comply with the horticulture code, Fruit Buyers Pty Ltd needs to be transparent about each financial transaction involving Joan’s produce. This includes the gross prices they received from the third party.

This is shown in the following illustrative example of a simplified grower statement: 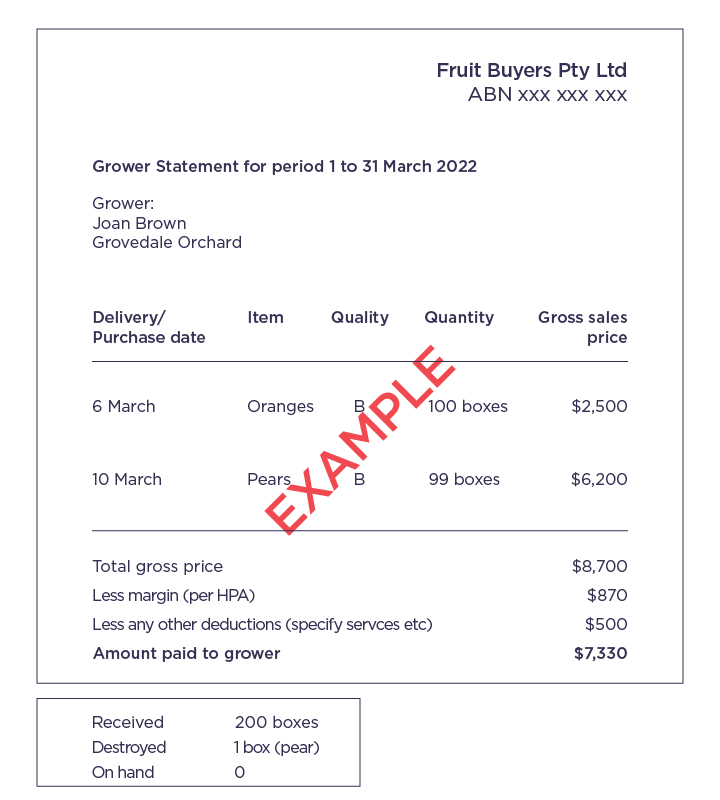