The ACCC is continuing to receive a high number of consumer reports about pricing and selling practices relating to rapid antigen tests in Australia and is investigating several potential Australian Consumer Law breaches.

The ACCC has received almost 3,900 reports from consumers about rapid antigen tests between 25 December 2021 and 26 January 2022, averaging about 121 reports per day. Pharmacies have been the most-complained about sector, attracting 1,309 complaints, or almost 34 per cent of reports, outstripping petrol stations (781 complaints, 20 per cent of reports) and convenience stores, tobacconists and supermarkets (764 complaints, almost 20 per cent).

Since mid-January, however, pharmacy complaints were less than 25 per cent of total reports, as many more complaints were received from smaller stores which would not usually sell such items.

More than 50 test suppliers, major retailers and pharmacy chains have now been asked by the ACCC to explain their costs, current pricing, and stock availability, and warned that they must be able to substantiate any claims made to consumers about the reasons for higher prices.

Importantly, the ACCC has also made further referrals to both the Australian Federal Police and the Therapeutic Goods Administration (TGA) following tip-offs by consumers about alleged illegal re-selling of rapid antigen tests and alleged package splitting and sale of tests not approved for home use in Australia.

In addition, an investigation has commenced into claims by some suppliers that government entities may have diverted or sought priority supply of rapid antigen tests.

“Community concerns about sales practices for rapid antigen tests remain very high, for good reason. We thank the consumers who have taken the time to pass on to us crucial information about what is happening in this market. These reports, and the public scrutiny, are helping to keep prices at lower levels than otherwise,” ACCC Chair Rod Sims said.

“Businesses now know we will be in touch very quickly if they choose to impose unjustifiably high mark-ups on rapid antigen tests, or make misleading statements to consumers. In view of the public interest in this issue, we will continue to name business chains whose stores are reported to have engaged in this conduct, and are working very closely with our fellow law enforcement agencies in this area, particularly in relation to individual stores.”

Almost 95 per cent of consumer reports received by the ACCC since 25 December 2021 were about the price of rapid antigen tests. Many of these reports also raised other concerns about the sale of the tests, including package splitting, which is illegal and where the TGA has jurisdiction. 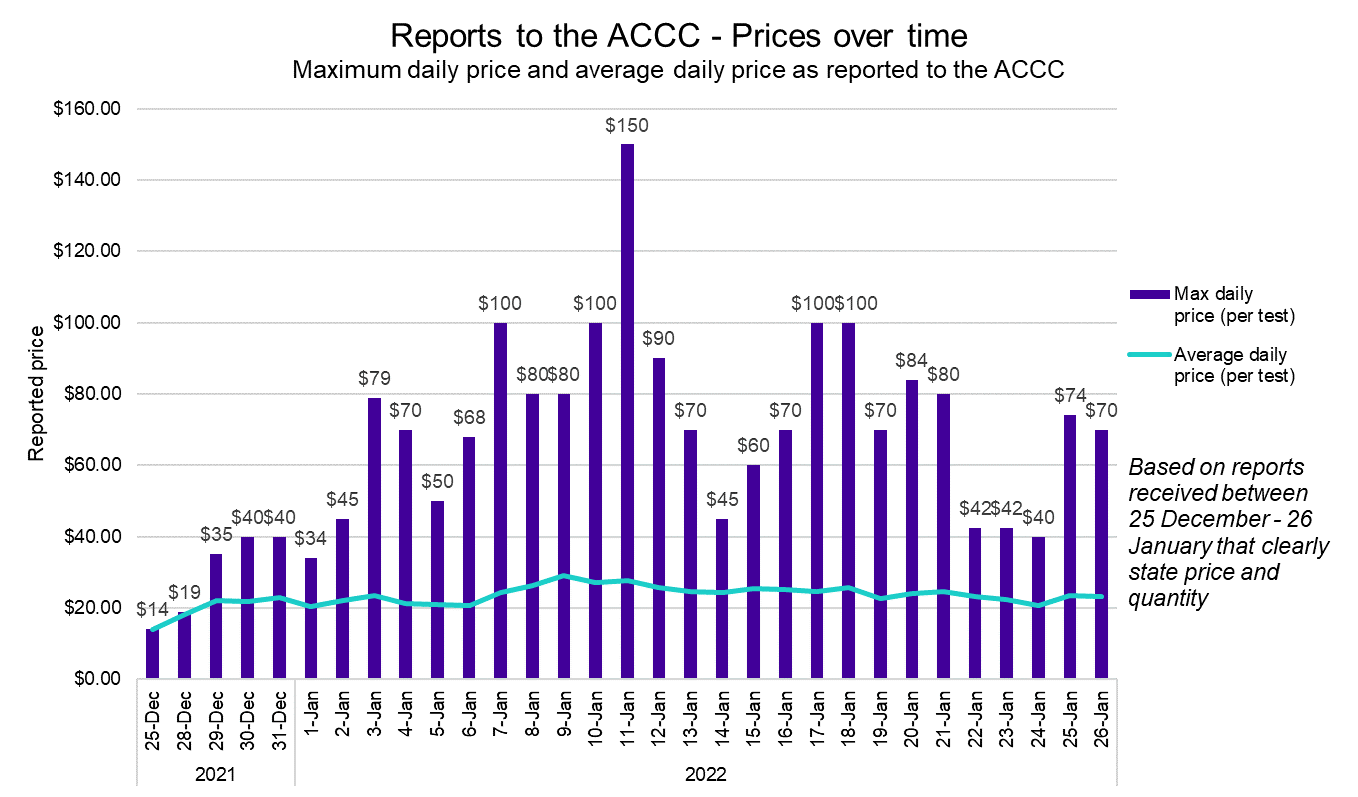 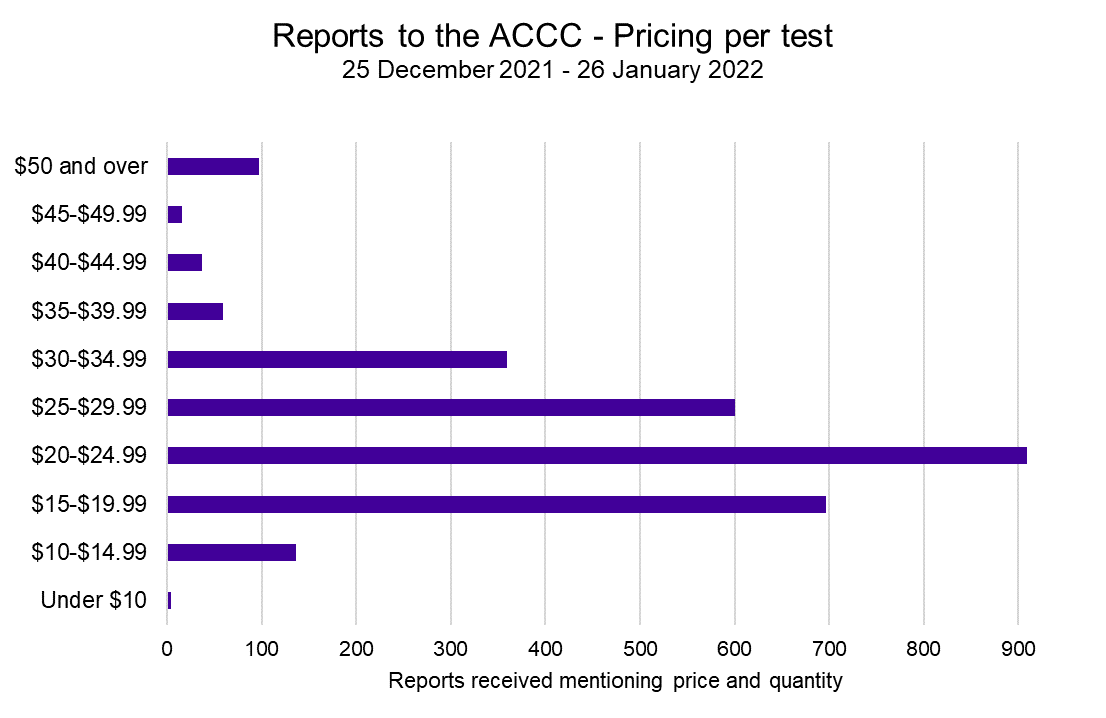 Updated information from intermediate suppliers, manufacturers and importers indicates that wholesale prices remain between $3.82 and $11.42 per test, depending on the type of test. The ACCC’s data on wholesale prices is based on information requests issued by the ACCC covering the period between 29 December 2021 and 14 January 2022. There have been some recent reports of higher wholesale prices which we are seeking to verify.

“While $20 retail prices remain lower than the more extreme reports received by the ACCC, this is still an unusually high mark-up that in our view is very difficult to justify,” Mr Sims said.

The average price of tests in pharmacies based on consumer tip-offs has recently been closer to $21. Most pharmacies appear to be charging between $15 and $25, however there are outliers with much higher prices.

“We are looking at reports of single tests being sold for $30 or more from certain stores. For example, we have received many reports of high prices at a number of individual IGA Supermarkets and BP-branded petrol stations (133 and 72 complaints respectively, to 26 January 2022). However, I want to emphasise these complaints are limited to a small number of individual stores in these chains and that the majority of stores in those chains have not been the subject of complaints to us. We have contacted those chains, and will be engaging with the stores named in complaints to ask them to explain their prices so we can work out what’s going on,” Mr Sims said.

Importantly, the ACCC has received significantly fewer complaints about excessive pricing involving certain businesses after previously raising concerns, including individual retailers operating under the King of the Pack and Metro Petroleum brands. 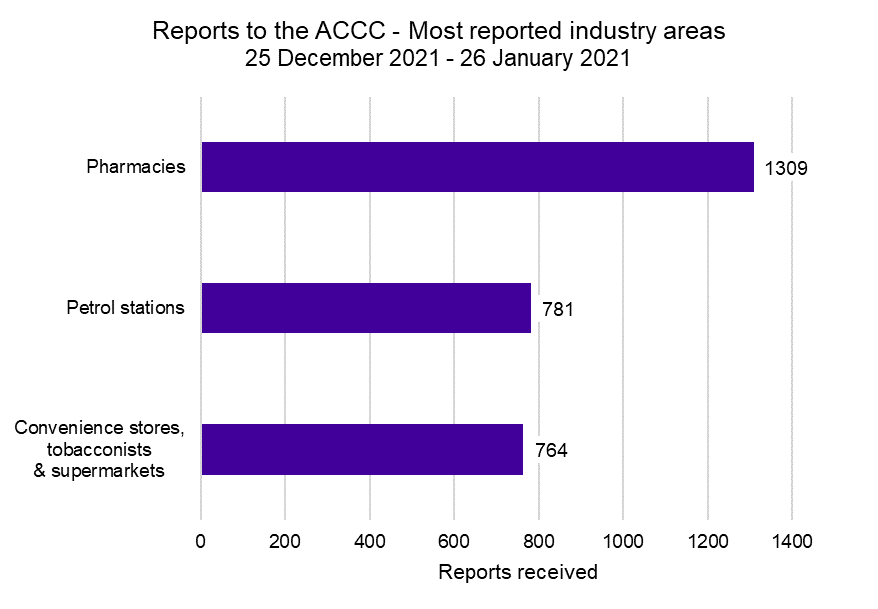 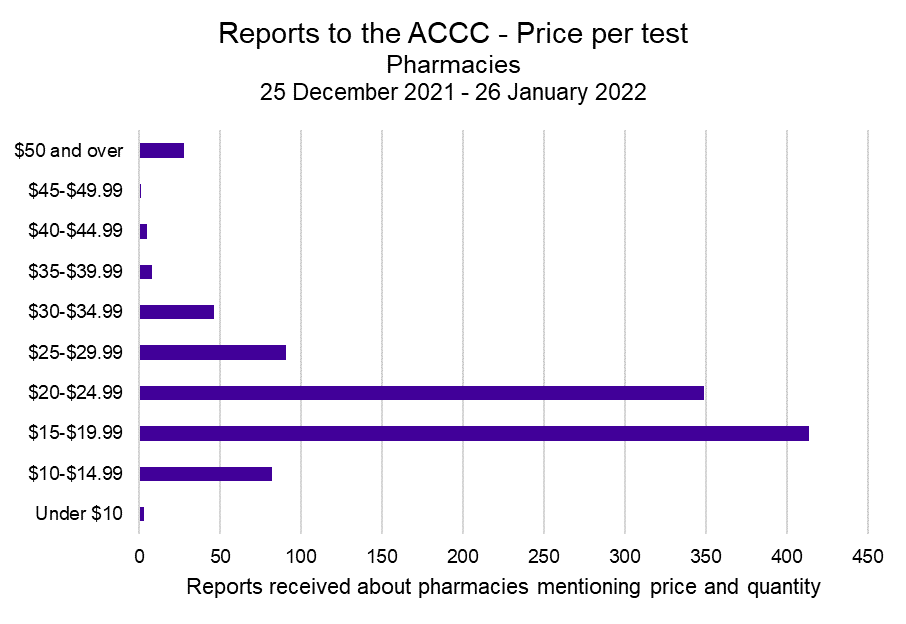 Investigation into alleged diversion of supplies by government bodies

The ACCC is investigating representations by a number of suppliers that government entities may have diverted or sought priority supply of rapid antigen tests from suppliers who had existing contracts in place.

Some suppliers have made these claims in emails or on their websites. The Federal Government has given clear and repeated advice that it has not commandeered or asked for priority supply.

“ACCC investigators are speaking with the suppliers involved and will look to address any misrepresentations identified,” Mr Sims said.

“The ACCC takes this opportunity to remind suppliers about the importance of honouring any contractual arrangements for supply, and of being honest about the reason why rapid antigen tests may currently be unavailable. Suppliers must be able to substantiate any claims they make about test availability, and we are asking them to do so.”

Information provided to the ACCC suggests that, following strong demand for these products, suppliers at various levels in the distribution chain are making decisions about which customers to supply. While significant volumes of orders have been placed, supply chain issues mean that many orders are still yet to be delivered to retailers.

While the ACCC is at the initial stages of its inquiries, one claim has since been publicly retracted by the supplier that initially made that representation.

Most consumer complaints are from NSW

Over two-thirds of consumer reports to the ACCC about rapid antigen test pricing were about traders in NSW. While this is a significantly higher proportion of complaints than may be expected from its population, it may also reflect that the Omicron ‘wave’ was initially concentrated in NSW more than other states, particularly in late December 2021 and early January 2022. 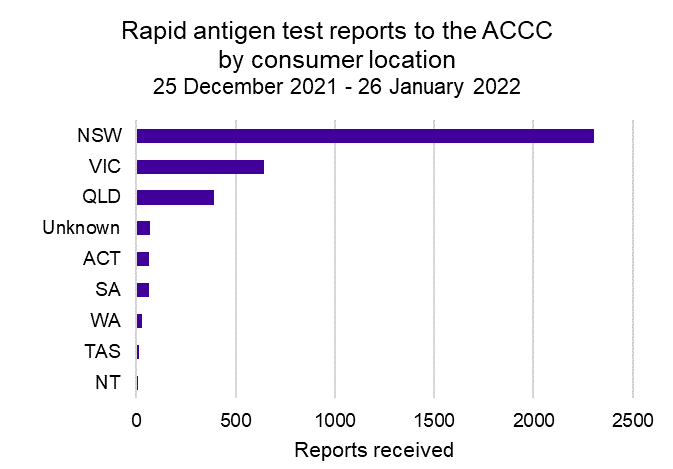 Almost 85 per cent of reports to the ACCC were about traders located in major Australian cities, with over 10 per cent of complaints being about traders in regional or remote Australia. The lower reporting pattern may reflect supply levels in those locations. 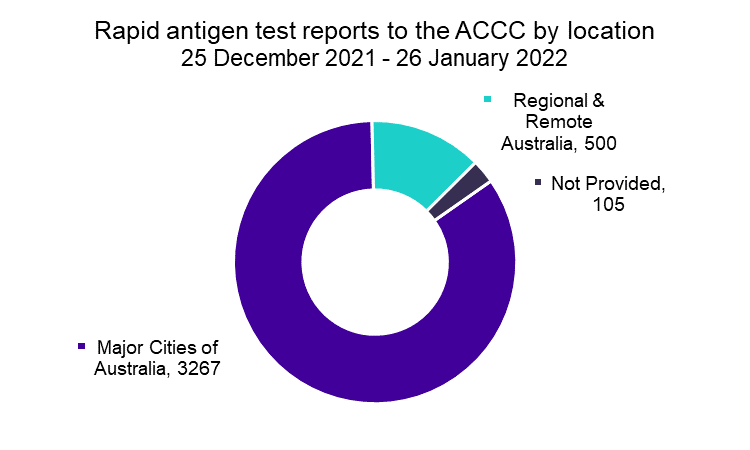 Recent consumer reports to the ACCC have revealed a number of emerging issues of concern.

ACCC is working with other regulators

The ACCC is continuing to work closely with other regulators to address public concerns about rapid antigen tests, and has recently referred a number of matters to the following agencies for consideration and potential investigation:

The ACCC has established a dedicated team to investigate alleged breaches of the ACL. As further information is received and analysed, the ACCC will continue to expedite investigative steps.

While suppliers are generally able to set their own prices, businesses must not make false or misleading statements about the reason for high prices.

In certain circumstances, excessive pricing of essential goods or services may also be unconscionable.

Businesses must also set their prices independently of their competitors and not collude about pricing.

Consumers can contact the ACCC to report concerning conduct.