Telcos to pay a total of $33.5 million for misleading statements about NBN maximum speeds

By making statements on their websites, in emails to consumers or in telesales, Telstra, Optus and TPG each promised to tell consumers within a reasonable timeframe if the speeds they were paying for could not be reached on their NBN connections. They each also said they would offer these consumers options, including to move to a cheaper plan with a refund, if they could not achieve the maximum speed on their plans.

Telstra, Optus, and TPG each admitted that their statements were false or misleading, in breach of the ACL, because they did not have adequate systems, processes and policies in place to ensure they would do what they said they would.

The false or misleading statements representations made by the three providers affected nearly 120,000 consumers in total and were made for at least 12 months in 2019 and/or 2020.

“Fast and reliable internet is a necessity for Australian households, and consumers need accurate information when choosing the best internet plan to meet their needs,” ACCC Commissioner Liza Carver said.

“These significant penalties reflect the seriousness of the breaches of consumer laws by these large and sophisticated businesses that should be better informed about their obligations towards their customers, particularly given the promises they made to their customers and in undertakings previously provided to the ACCC regarding speed claims for their NBN plans in 2017.”

Telstra, Optus and TPG also each admitted that by failing to notify consumers whose maximum attainable speeds were lower than the speed of their purchased plan, they had falsely represented to those consumers that their NBN connections were capable of attaining the higher speeds.

“Some customers may have paid for a 50 or 100 Mbps plan believing their NBN connection could support the higher download speeds, even though they would have been better off paying for a lower speed plan,” Ms Carver said.

“It is illegal for businesses to make false or misleading representations to consumers about the performance characteristics, nature, standard or quality of products and services.”

Telstra, Optus, and TPG have each implemented remediation programs and have already contacted impacted customers to provide refunds. The Court has ordered that Optus re-contact affected customers who have not already responded to previous contact or been credited, to offer compensation within 120 days. These Optus customers can expect to receive an update on their speed data and there will be a dedicated customer service line for them to contact Optus regarding compensation.

Telstra, Optus, and TPG were ordered to pay part of the ACCC’s costs.

TPG, Optus, and Telstra cooperated with the ACCC to make joint submissions on penalty and other orders to the Court.

In August 2021, the ACCC instituted separate proceedings in the Federal Court against Telstra, Optus, and TPG for making alleged false or misleading representations in their promotions of some 50Mbps and 100Mbps NBN plans, in breach of the ACL.

The ACCC has published Broadband speed claims: industry guidance to assist retail service providers with advertising speeds for fixed-line broadband services. Principle six in the guidance states that internet retailers should have systems in place to diagnose and resolve broadband speed issues.

In late 2017, Telstra, Optus, and TPG provided court-enforceable undertakings to the ACCC to provide remedies to consumers after they had promoted NBN plans with specific maximum speeds which could not be obtained. The undertakings also required them to check the maximum speeds and inform consumers if this did not meet the speed in their plan.

The ACCC has previously taken legal action against Telstra, and Optus (in 2018, early 2019, and late 2019) in relation to other false and misleading statements.

With regard to the Optus compensation program, the ACCC is warning Optus customers to be particularly wary of potential scams contact. The Scamwatch website has further information on how to protect yourself from scams. 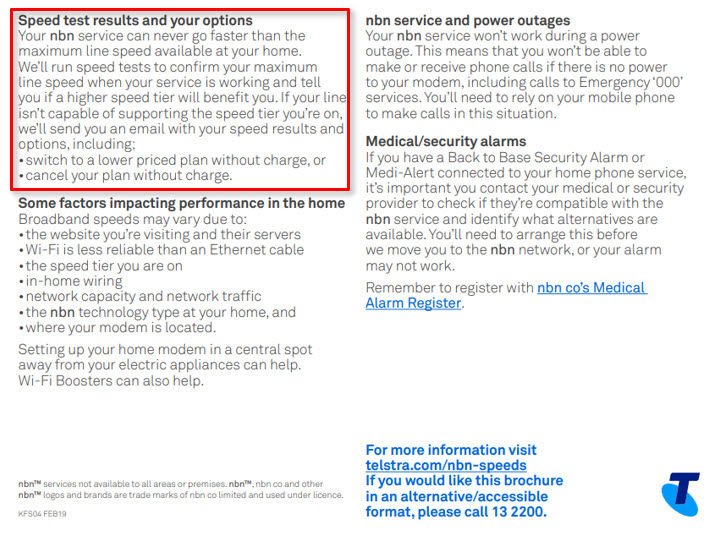 Example of advertisement by Optus (red box inserted for emphasis) 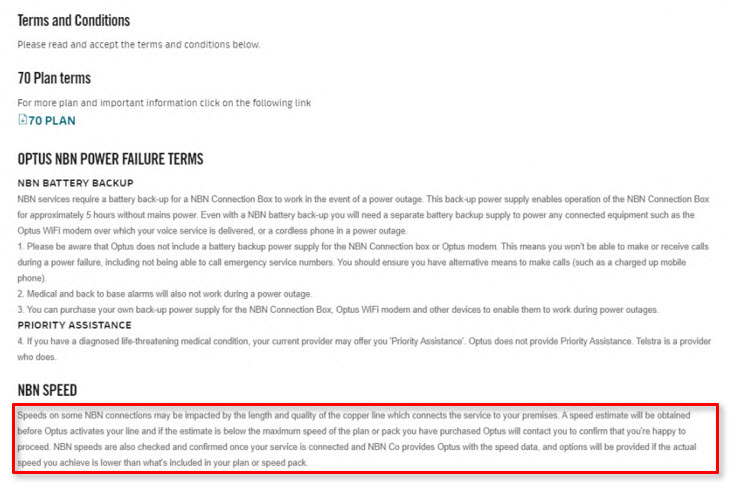 Text: NBN Speeds are also checked and confirmed once your service is connected and NBN Co provides Optus with the speed data and options will be provided if the actual speed you achieve is lower than what’s included in your plan or speed pack. 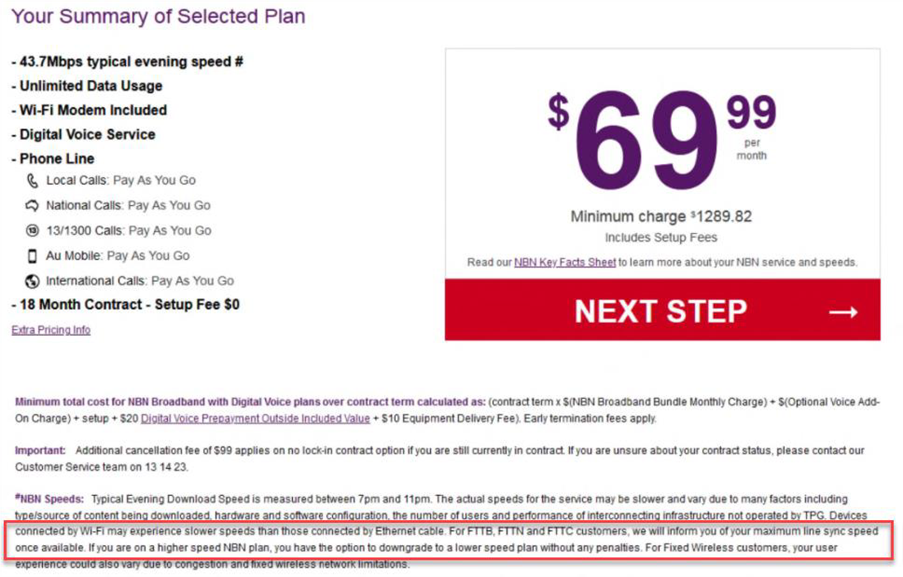