Two Sydney roofing companies have acknowledged in enforceable undertakings that discussions on social media about setting minimum rates for the repair of hail-damaged homes were likely to constitute an attempt to fix prices, and in some circumstances could raise concerns under the new concerted practices prohibition.

ANZ Roofing Pty Ltd and Ivy Contractors Pty Ltd, and their directors Mark Lee Burtenshaw and Brent Cameron Callan-Kerkenezov, have acknowledged the ACCC's concerns about the messages, which appeared on two Facebook groups in December 2018.

The two Facebook sites are used by thousands of roofing providers in the greater Sydney area to advertise jobs and discuss industry issues. The messages appeared soon after a damaging Sydney hailstorm.

“The ACCC was concerned that competing roofers in Sydney attempted to use the Facebook groups to share and seek to agree on minimum rates for various roofing services,” ACCC Chair Rod Sims said.

“The roofers acknowledged that messages of this kind were likely to amount to an attempt to fix prices, and acknowledged that in some circumstances the conduct could raise concerns under the new law which prohibits concerted practices which have an anti-competitive purpose or effect.”

“Any attempts to take advantage of people whose homes were damaged in natural disasters like hailstorms is something the ACCC takes extremely seriously. The community will not just find this outrageous, it is also anti-competitive, and illegal under Australian competition laws,” Mr Sims said.

“Businesses must remember that attempts by competitors to set prices or share pricing information, whether on social media or in any other forum, are likely to breach Australian cartel and concerted practices laws. The ACCC wants to hear from anyone who knows about such behaviour in any industry.”

“This is the ACCC’s first enforcement outcome in relation to anti-competitive concerted practices, which have been prohibited since a new law was introduced in November 2017.”

A message on one Facebook group from Mr Burtenshaw showed an image of a large hailstone and read ‘I think this latest storm is the perfect opportunity for the roofers of Sydney to increase pricing across the board as a standard that doesn’t decrease!’ .

Another message, from Mr Kerkenezov, stated ‘Let’s agree that we start from $65 and go up’, apparently referring to the price per linear metre to install new quad guttering.

The companies and their directors accepted the ACCC concerns that the Facebook posts:

The companies, as well as Mr Burtenshaw and Mr Kerkenezov, provided the ACCC with court-enforceable undertakings not to repeat the behaviour and for the individual directors to receive compliance training in competition and consumer law. ANZ Roofing will also publish a post on one of the Facebook groups about prohibited anti-competitive conduct.

After the ACCC’s investigation, Mr Burtenshaw removed the posts of concern from the two Facebook groups and Mr Kerkenezov left the group of which he was a member.

In this situation, the ACCC has decided to exercise its discretion not to take court action due to a range of factors including the small size of the traders and their cooperation with the ACCC’s investigation.

ANZ Roofing and Ivy Contractors are both medium sized roofing companies located in NSW that provide residential and commercial roofing services in Sydney.

A ‘concerted practice’ involves communication or cooperative behaviour between businesses that may not amount to an understanding but goes beyond a business independently responding to market conditions.

Most commonly, concerted practices will involve a pattern of cooperative behaviour or communications between two or more businesses. This may involve communicating in public or private. Concerted practices are illegal when they have the purpose, effect, or likely effect, of substantially lessening competition in a market.

Further information is available at ACCC Guidelines on concerted practices.

Anyone concerned about an issue in the construction industry can contact us at Anonymously report a construction sector issue or call the Infocentre on 1300 302 502.

Anyone who thinks they may be involved cartel conduct, can also apply for immunity from prosecution in exchange for helping us with our investigations.

An example of a message from one of the Facebook groups: 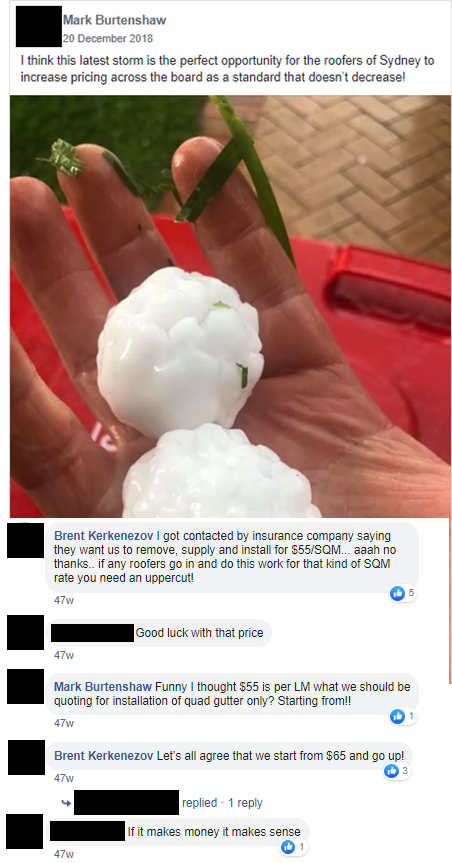