Despite this, the ACCC found that 2017–18 was a relatively stable year for major water infrastructure operators, with relatively minor changes in hypothetical (or average) bills for irrigators in the majority of networks.

The ACCC is required under the Water Act 2007 to monitor regulated water charges, transformations and terminations, and compliance with the water charge and water market rules by monopoly water infrastructure operators that service water users including irrigators in the Murray–Darling Basin (MDB).

Most hypothetical bills calculated by the ACCC for Basin water infrastructure operators did not change much from 2016–17. Overall, on-river hypothetical bills rose slightly above the rate of inflation, while off-river bills rose by an average of about 5 per cent in pressurised networks and 1 per cent in gravity fed networks (both in nominal terms).

The report found that, within water infrastructure operators’ networks, the volume of water delivery rights traded increased by 10 per cent during the year, partly due to large trades within the Murrumbidgee Irrigation and Jemalong networks, while trade of temporary allocations of water rights declined by 20 per cent.

“Water markets in the Murray–Darling Basin have developed significantly since 2007, and despite variation in trade volumes between years, we are seeing water users access markets to manage risk in a variety of ways,” ACCC Deputy Chair Mick Keogh said.

“Carryover and water markets more generally are aimed at helping water market participants to manage water risk year-to-year, and this is what we saw happening during 2017–18,” Mr Keogh said.

Prices for tradeable water products rose significantly, with the southern connected MDB experiencing record prices for most water entitlement types in 2017–18, underpinned by strong commodity prices and expanded growing area for crops in the Murrumbidgee and Murray regions.

“However, the ACCC continues to have some broad concerns over the reliability of publicly available water trading data,” Mr Keogh said.

The report found that while the number of applications for ‘transformation’ of irrigation rights into water access entitlements increased from 2016–17 (up 32 per cent), the total volume of transformations and ‘terminations’ both dropped to record lows in 2017–18. ‘Transformation’ is the process whereby a customer transforms their irrigation right held against a water infrastructure operator into a water access entitlement that they can individually manage or trade.

“A significant proportion of irrigation rights remain untransformed. This may indicate that water users are hesitant to incur transformation and trade approval fees, or commit the additional time required to manage their own water access entitlements,” Mr Keogh said.

“Given the cumulative volume of transformations is much greater than that of terminations, we know that some irrigators have transformed their irrigation rights but not terminated their water delivery rights to the same extent. These irrigators may have planned to continue irrigating while participating in water trading.”

Compliance with the water charge rules and water market rules by water infrastructure operators was generally good in 2017–18. There was a rise in complaints year-on-year, from 10 to 14, but the number of complaints remained significantly lower than its peak of more than 70 in 2011–12.

“In 2017–18, MDB policy and its governance framework were subject to multiple reviews and public debate. Further policy and governance changes have been foreshadowed,” Mr Keogh said.

The report can be viewed at ACCC water monitoring report 2017-18.

The ACCC’s water monitoring report uses a range of sources to assess the state of the water market and trends in regulated water charges. These include data collected directly from water infrastructure operators and Basin states, as well as information from reports and other content published by government agencies, academia and industry.

The ACCC uses ‘hypothetical bills’ to estimate annual charges for end water users, such as irrigators, for specified volumes of irrigation right and water delivery scenarios.

‘Carryover’ is an arrangement that allows irrigators and other water entitlement holders to not use some of their allocated water during a water year, instead holding that allocated water in storages so it is available in subsequent years.

Irrigators may hold their own water access entitlements, or hold a right to water as a share of the bulk water entitlement held by a water infrastructure operator (such as Murray Irrigation or Murrumbidgee Irrigation) which services a number of farmers. If an irrigator who has a right to water within a water infrastructure operator’s network wishes to trade that water to someone who is outside that network, a number of processes are involved, starting with ‘transformation’.

‘Transformation’ is the process whereby a customer (usually an irrigator) transforms their irrigation right held against a water infrastructure operator into an individually-owned water access entitlement. Transformation can give an irrigator more control and flexibility over their water rights, especially in relation to external trade, but may come with additional costs. Transformation arrangements are regulated by the Water Market Rules 2009. Following transformation, the customer can trade the water held under their water access entitlement temporarily or permanently.

‘Termination’ is the process when a customer partially or fully reduces their right of access to a water infrastructure operator’s irrigation network, usually represented by their ‘water delivery right’. Irrigators may be required to pay a termination fee when terminating, to contribute towards ongoing unavoidable costs of maintaining the network. The maximum amount of termination fees is regulated by the Water Charge (Termination Fees) Rules 2010. 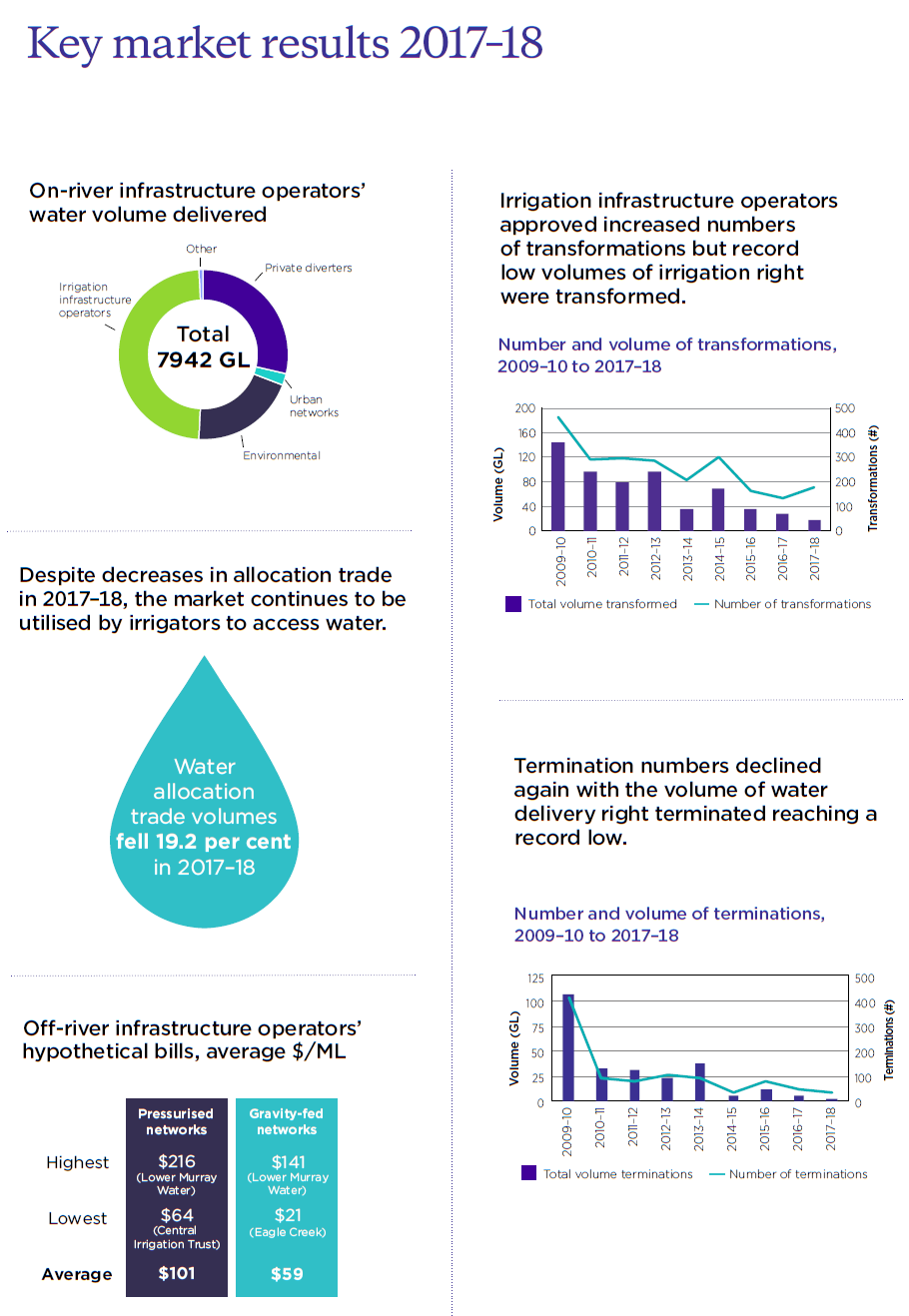