SmileDirectClub admitted that between May 2019 and October 2020, it made false or misleading statements to consumers on its website and in emails, SMS text messages and information cards provided in store, in contravention of Australian Consumer Law.

The statements represented that consumers may be entitled to a reimbursement from their private health fund for part of the cost of the company’s teeth aligners and related treatment.

The vast majority (98.5 per cent of the market) of Australian private health insurance companies did not provide coverage for the costs of SmileDirectClub’s aligner treatment.

“This was concerning conduct, and we began receiving complaints from affected consumers about it shortly after SmileDirectClub entered the Australian market,” ACCC Commissioner Liza Carver said.

“As a result of the misleading claims, some consumers with private health insurance which included orthodontics coverage may have purchased SmileDirectClub’s aligner treatments on the understanding that they would get some money back from their health fund, when this was not the case.”

“Making false or misleading statements is a breach of Australian Consumer Law. This outcome is a reminder to all companies, whether established businesses or new entrants, that they must ensure they comply with Australian consumer laws when they sell their products and services to Australian consumers,” Ms Carver said.

The Court also made other orders, including requiring SmileDirectClub to implement a compliance program and to pay a contribution to the ACCC’s costs.

SmileDirectClub admitted it had contravened the Australian Consumer Law and made joint submissions with the ACCC in respect of penalties and other orders. It also commenced reimbursing some consumers prior to the Court making orders.

In July 2021, the ACCC instituted proceedings against SmileDirectClub.

SmileDirectClub LLC is a private company, based in Nashville, Tennessee which sells dental aligners direct to consumers. It is the parent company of the Australian subsidiary SmileDirectClub Aus Pty Ltd which started trading in Australia in May 2019, operating SmileShops in NSW, QLD, VIC and WA.

The aligners were sent directly to consumers. Consumers did not attend in-person appointments with a dentist or orthodontist over the course of the Aligner Treatment.

Example of the ‘Good News’ email 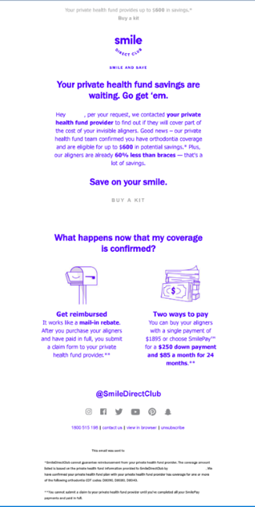