The Federal Court has ordered online tasking platform Service Seeking Pty Ltd to pay $600,000 in penalties for making false or misleading representations regarding reviews of businesses which were offering services on the platform.

Service Seeking operates an online tasking platform where customers can seek quotes for jobs, such as gardening, building or cleaning services from businesses registered with the platform.

Service Seeking admitted that it had falsely represented that reviews published on its platform were by customers, when in fact the reviews had been created by the businesses themselves through the use of Service Seeking’s ‘Fast Feedback’ feature.

Service Seeking’s ‘Fast Feedback’ feature allowed businesses to use a template to draft their own reviews and choose a star rating for their service after completing a job. This draft review was then emailed to customers. If a customer did not respond to the business’ self-written review within three days, the review was automatically published under the business’ profile on the Service Seeking platform.

The ‘Fast Feedback’ feature was used to create about 21,000 reviews between 12 July 2016 and 29 November 2018. In that time about 17,000 such reviews were automatically published without customer input.

In his judgment, Justice Jackson said: “Service Seeking engaged in a systematic course of conduct for the self-interested purpose of increasing the attractiveness of its website to businesses and customers in a manner which it must have known would give rise to numerous instances of misleading conduct. This was an abuse of the trust that customers can be inferred to have placed in the site, the existence of which can be inferred from the number of active customers who posted one or more jobs.”

“Service Seeking’s Fast Feedback feature enabled businesses to rate and review themselves, which created a false impression of the number of favourable reviews and the star rating of those businesses,” said ACCC Deputy Chair Delia Rickard.

“Consumers are increasingly relying on online reviews as a way of making informed purchasing decisions. Deceiving them about the authenticity of the reviews in my view is showing contempt for consumers.”

The Court also made orders for injunctions, corrective notices and the implementation of a compliance program.

Service Seeking admitted liability and made joint submissions to the Federal Court with the ACCC.

By December 2018 Service Seeking had over 1.5 million customer accounts and approximately 170,000 business accounts.

On 14 December 2018, the ACCC instituted proceedings against Service Seeking in the Federal Court. 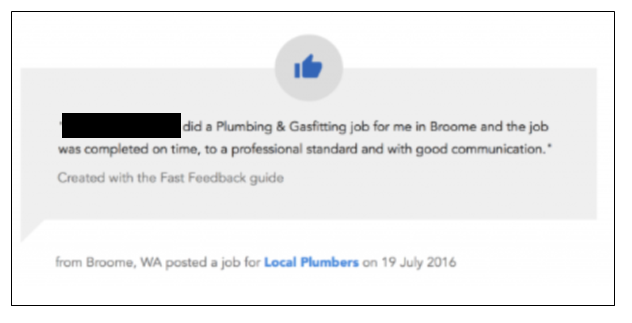