Processors warned not to mislead dairy farmers about milk prices

The ACCC has warned dairy processors not to mislead farmers about milk prices, following reports of processors blaming their private-label milk contracts with supermarkets for the low prices offered to farmers.

A key finding of the ACCC’s Dairy Inquiry was that almost all contracts for the supply of private label milk allow processors to pass-through movements in farm gate prices to supermarkets. In addition, farmers are paid the same price irrespective of whether their milk goes into private label or branded products. These findings were based on detailed evidence provided by supermarkets and processors.

“Dairy processors need to be honest with farmers. We have written to a number of processors warning them not to mislead farmers by blaming private label milk contracts for the prices offered for milk at the farmgate,” ACCC Chair Rod Sims said.

“We’re concerned this is misleading as the power lies with processors to raise the farmgate price paid to farmers, and then pass these higher farmgate prices on to supermarkets.”

The ACCC has heard reports from a number of dairy farmers in NSW and Queensland who are struggling to cover costs in the face of drought conditions. These reports allege that processors say they cannot pay farmers more for their milk because of the low $1 per litre price for private label milk. Given the existence of these pass-through clauses, this is not correct.

The milk supply chain works by farmers selling their products to dairy processors who process and package the product. Supermarkets then buy the packaged milk from the processors, both private label and branded products, and sell it to consumers.

On 27 October 2016, the Treasurer issued a notice requiring the ACCC to hold an Inquiry into the competitiveness of prices, trading practices and the supply chain in the Australian dairy industry. The ACCC released its final report on 30 April 2018: Dairy inquiry

Among other terms of reference set by the Treasurer, the ACCC examined the impact of supermarket pricing of private label milk and other dairy products on outcomes up the dairy supply chain. 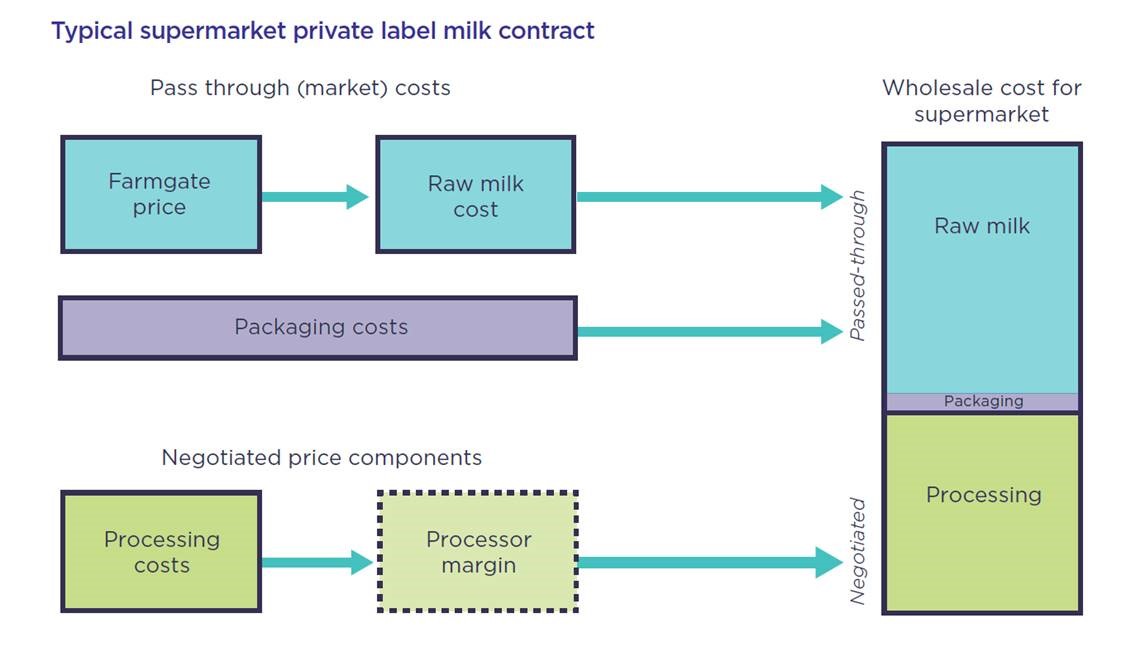