Cuts in oil production by the OPEC cartel and other big producers, combined with a pick-up in global fuel demand, led to higher petrol prices in Australia’s five largest capital cities in the March 2021 quarter.

According to the ACCC’s latest petrol monitoring report, the average retail price for petrol across Sydney, Melbourne, Brisbane, Adelaide and Perth was 133.4 cents per litre (cpl), an increase of 12.0 cpl from the December quarter 2020. Adelaide experienced the largest increase at 18.0 cpl and Brisbane the smallest at 9.6 cpl.

“What we are experiencing in Australia is a flow-on effect of higher international crude oil and refined petrol prices,” ACCC Chair Rod Sims said.

Over the last 40 years, international crude oil prices in inflation-adjusted terms were on average around USD 61 per barrel. In March 2021 monthly average crude oil prices were above this long-term average for the first time since December 2019.

“The OPEC cartel controls a huge amount of global oil supply. Its agreements to restrict supply means higher crude oil prices which largely influence refined petrol prices. The higher price of Mogas 95, the benchmark for refined regular unleaded petrol in the Asia-Pacific region, means we are paying more for petrol at the bowser,” Mr Sims said.

Retail prices in Australia are primarily determined by international refined petrol prices, as shown in the following chart.

Source:    ACCC calculations based on data from FUELtrac, OPIS, Argus Media and the Reserve Bank of Australia.
Note:        The area to the right of the dotted vertical line represents the March quarter 2021.

The retail petrol price in Australia can be divided into three components: the petrol that goes into the tank, taxes, and the costs and margins of wholesalers and retailers.

In the March quarter 2021, the cost of petrol and taxes were nearly the same, and together made up 82 per cent of the average retail price of petrol.

“A large proportion of what consumers pay when filling up their car is fuel excise tax, and some of this, in effect, is used by the government to fund Australia’s roads,” Mr Sims said.

Demand for petrol in the March quarter 2021 remained below pre-pandemic levels, with petrol sales volumes across Australia declining slightly between the December 2020 and March 2021 quarters.

“In the second half of 2020 national petrol sales partially recovered when some COVID-19 restrictions were eased. However lockdowns in Brisbane, Perth, Melbourne and parts of Sydney, and floods in New South Wales and Queensland, contributed to sales declining slightly in the March quarter 2021,” Mr Sims said.

Average gross indicative retail differences in the five largest cities fell slightly for the second consecutive quarter, however they still remain relatively high. In the March quarter, they were 15.8 cpl, a decrease of 1.6 cpl from the previous quarter.

Gross indicative retail differences are the difference between retail prices and terminal gate (or wholesale) prices, and are a broad indicator of gross retail margins. As they include retail operating costs, they should not be interpreted as actual retail profits.

Lower petrol demand from the effects of COVID-19 likely contributed to the high gross indicative retail differences in 2020, and this may have continued in the March quarter.

“There are some fixed costs involved in petrol retailing and businesses may have been setting retail prices higher than they otherwise would to offset lower sales volumes,” Mr Sims said.

In March this year the South Australian Government commenced its fuel price transparency scheme, which will be trialled for the next two years.

Regional prices were below prices in the five largest cities

“Petrol prices have traditionally been higher in regional areas, where there is generally less competition, so three consecutive quarters of lower prices than major capital cities is good news for people filling up at the bowser in the regions,” Mr Sims said.

On 16 December 2019, the Treasurer issued a new Direction to the ACCC to monitor the prices, costs and profits relating to the supply of petroleum products in the petroleum industry in Australia and produce a report every quarter. This is the sixth quarterly petrol monitoring report under the new Direction. 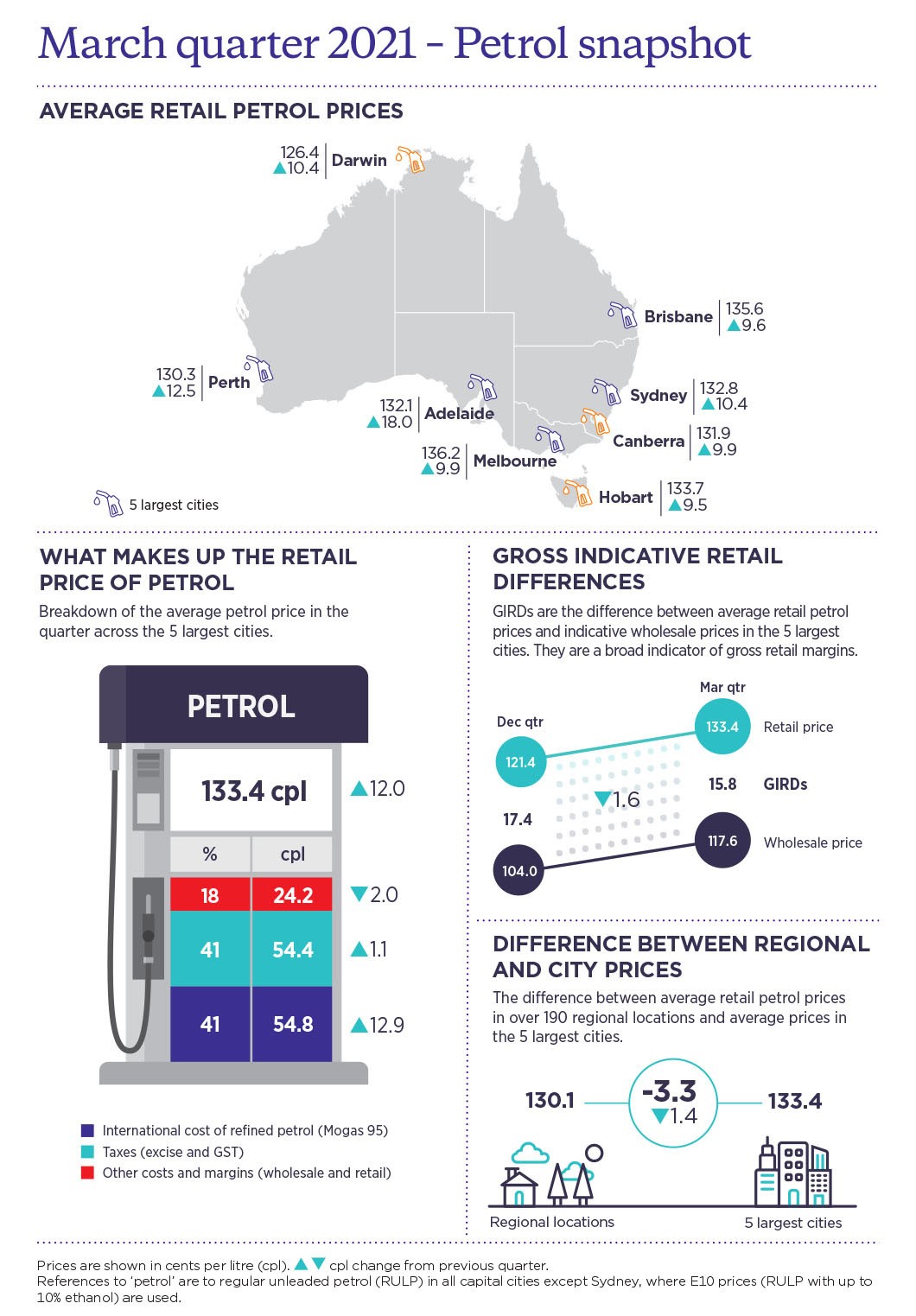