Average petrol prices in the June quarter 2020 fell to their lowest level in 21 years in real inflation adjusted terms as a result of the COVID-19 pandemic, but gross retail margins remain at record highs.

The ACCC’s latest petrol monitoring report shows that the average retail price for petrol in the June quarter across Sydney, Melbourne, Brisbane, Adelaide and Perth was 109.0 cents per litre (cpl), a decrease of 28.8 cpl from the March quarter 2020.

Gross indicative retail differences (GIRDs) are the difference between retail prices and terminal gate prices, and are a broad indicator of gross retail margins. As GIRDs do not account for retail operating costs, they should not be interpreted as actual retail profits; however, ACCC analysis has found that increasing GIRDs in recent years are a result of increases in both operating costs and profit margins.

The level of prices, costs and profits vary significantly between retail operations and not all retail petrol sites will be achieving these gross margins.

“Many Australian motorists benefited from lower petrol prices over the first half of this year, but we have some concerns about the higher gross margins that petrol retailers seem to be holding on to,” ACCC Chair Rod Sims said.

The ACCC’s report shows the COVID-19 pandemic’s hit to economic activity has decreased demand for petrol, and sales volumes were 27 per cent lower in the June quarter 2020 compared with the same period last year.

“There are some fixed costs involved in petrol retailing and it’s likely that businesses have increased gross retail margins, to some degree, to offset lower sales volumes,” Mr Sims said.

“While less petrol being sold during COVID-19 restrictions may be a contributing factor to the record high gross retail margins, we’re not convinced that this fully explains the levels we’re seeing.”

“Owning and operating a car is a major expense at the best of times, let along during the current economic crisis, and Australian drivers want to see lower global oil prices passed on to them in a timely manner.”

A collapse in global crude oil prices earlier this year led to historic low retail petrol prices in late April across Australia’s five largest cities, but prices then increased and finished the June quarter at an average of 119.3 cpl, still well below annual average prices over the last three years.

The 28.8 cpl fall in the average retail price of petrol from the March to June quarter 2020 was driven by a 22.3 cpl drop in the price of Mogas 95, which is the benchmark for refined petrol in the Asia-Pacific region.

Due to much lower Mogas 95 prices, the June quarter 2020 was the first time in four years that taxes, which includes excise and the GST, made up a larger proportion of the total retail price of petrol than the refined petrol itself.

Across the 2019-20 financial year, Mogas 95 and taxes together accounted for 81 per cent of the price of petrol, 4 percentage points lower than last year. This saw the wholesale and retail costs and margins component of petrol increase to 19 per cent in 2019-20.

“Mogas prices are influenced by global crude oil prices, and as well as concerns about the COVID-19 pandemic it was the breakdown in talks between the OPEC cartel and other major oil producing nations in March 2020 that caused oil prices to collapse,” Mr Sims said.

“Lower crude oil prices are one of the few positives from current world events and drivers in Australia have enjoyed lower petrol prices on the back of it.”

Outside the largest cities

The city-country divide has narrowed year-on-year, and in 2019-20 the annual average gap between regional prices and prices in the five largest cities was 4.0 cpl, which is 2.5 cpl lower than last year.

The differential between retail petrol prices in the three smaller capital cities (Canberra, Hobart and Darwin) and the five largest cities increased to 10.2 cpl in the June quarter 2020, up from 7.6 cpl in the March quarter. 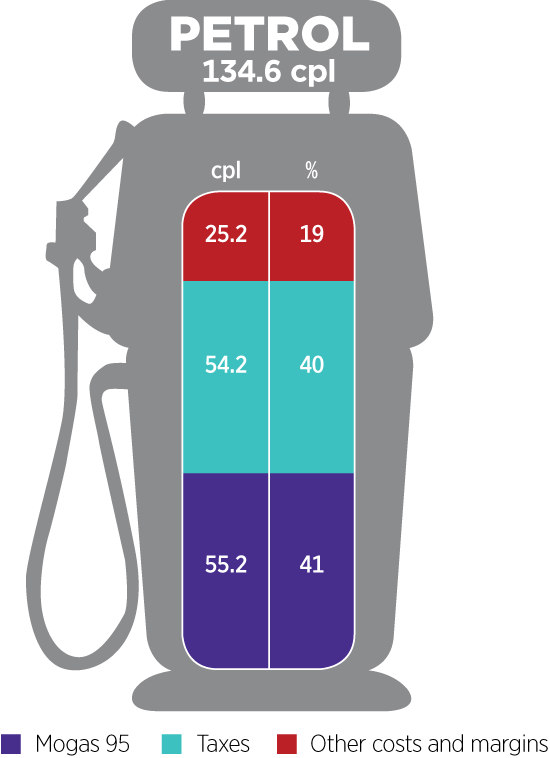 Source:    ACCC calculations based on data from FUELtrac, Argus Media, OPIS and RBA.

Changes in the components of average retail petrol prices in the five largest cities: March quarter 2020 to June quarter 2020

Source:    ACCC calculations based on data from FUELtrac, Argus Media, OPIS, BP, Caltex, Mobil, Viva Energy, WA FuelWatch, RBA and ATO.
Notes:      All prices are in Australian cents per litre. The taxes component includes fuel excise and wholesale GST. The small amount of retail GST is included in GIRDs rather than in taxes, to be consistent with GIRDs reported elsewhere in this report.

Source:    ACCC calculations based on data from FUELtrac.
Notes:      The area to the right of the dotted vertical line in this and subsequent charts represents the June quarter 2020.

On 16 December 2019, the Treasurer issued a new Direction to the ACCC to monitor the prices, costs and profits relating to the supply of petroleum products in the petroleum industry in Australia and produce a report every quarter. This is the third quarterly report under the new Direction.