Petrol prices in Australia’s five largest cities stabilised at the end of 2020 after an unpredictable year and petrol sales volumes continued to recover from their earlier pandemic-driven slump.

That’s according to the ACCC’s latest petrol monitoring report which shows the average retail price for petrol in the December quarter 2020 across Sydney, Melbourne, Brisbane, Adelaide and Perth was 121.4 cents per litre (cpl), a decrease of only 0.7 cpl from the previous quarter.

Of the five capital cities, Adelaide had the largest decrease in the average retail price (7.0 cpl) in the December quarter, and Sydney had the largest increase (3.4 cpl).

“Restrictions on travel and economic activity from the pandemic have had an enormous effect on petrol volumes and prices in Australia” ACCC Chair Rod Sims said. “All motorists would have liked to see petrol prices remain at the record lows of April last year but average prices in the December quarter were still about 30 cpl below the 15-year inflation adjusted average.”

Average gross retail margins in the five largest cities fell slightly in the December quarter, after hitting record highs in the September quarter, but remained well above historical levels.

Gross indicative retail differences (GIRDs) are the difference between retail prices and terminal gate prices, and are a broad indicator of gross retail margins. As GIRDs do not account for retail operating costs, they should not be interpreted as actual retail profits.

Average GIRDs in 2020, in inflation adjusted terms, across the five largest cities were 17.1 cpl, an increase of 4.4 cpl from calendar year 2019. This is the highest level on record in both nominal and inflation adjusted terms. The level of prices, costs and profits vary significantly between retail operations and not all retail petrol sites will be achieving these gross margins.

“Lower demand for petrol during the pandemic is likely to be a factor in the very high GIRDs we saw last year, as retailers may have increased their gross margins to offset the lower sales volumes,” Mr Sims said.

“Given that sales volumes are almost back to pre-pandemic levels, we can expect GIRDs to fall this year as more normal conditions return. We will be watching very closely to see how petrol retailers respond.”

Taxes higher than cost of fuel

The December quarter 2020 was the third successive quarter in which taxes accounted for a larger proportion of the total price of petrol than the refined petrol itself.

Mogas 95, which is the benchmark for refined regular unleaded petrol in the Asia-Pacific region, and taxes together made up 78 per cent of the average price of petrol in the December quarter.

“The price Australians pay at the petrol bowser can be divided into three components: the petrol that goes in your tank, taxes, and the costs and margins of wholesalers and retailers. Between April and December last year, a large part of what you paid at the bowser was tax,” Mr Sims said.

Last year the Australian Government announced measures to enhance Australia’s fuel security. This included a minimum payment of 1.0 cpl for each litre of petrol, diesel and jet fuel produced by domestic refineries that agree to continue operating in Australia. In December the government announced that it was bringing forward the payments to begin on 1 January 2021.

The refinery payment is part of the Australian Government’s broader fuel security package that aims to contribute to the security of fuel supply, keep prices low for consumers, and support local industry and employment.

“The ACCC understands the objectives of the scheme are to promote domestic fuel security and employment. However we are mindful that, depending on its design, parts of the scheme could adversely affect market competition and fuel prices” Mr Sims said.

“The package proposes payments to domestic refiners but potentially additional costs on other parts of the industry, such as fuel importers. These payments and costs have the potential to alter competitive dynamics in the wholesale and retail fuel markets in Australia and impact consumers. These implications should be considered in the development of the scheme.”

“Petrol prices have traditionally been higher in regional areas with less competition so a sustained period with average prices below those in the major capital cities is good news for people across regional Australia,” Mr Sims said.

The Queensland Government announced in December 2020 that its real-time fuel price reporting scheme would be made permanent. “This is good news for Queensland motorists, giving them continued access to real-time prices to help them find petrol stations with the cheapest fuel,” Mr Sims said.

“Motorists in New South Wales, Western Australia, the Northern Territory and Tasmania can also access real-time petrol prices through transparency schemes, and a scheme in South Australia is scheduled to start next month.”

On 16 December 2019, the Treasurer issued a direction to the ACCC to monitor the prices, costs and profits relating to the supply of petroleum products in the petroleum industry in Australia and produce a report every quarter. This is the fifth quarterly report under the new direction. 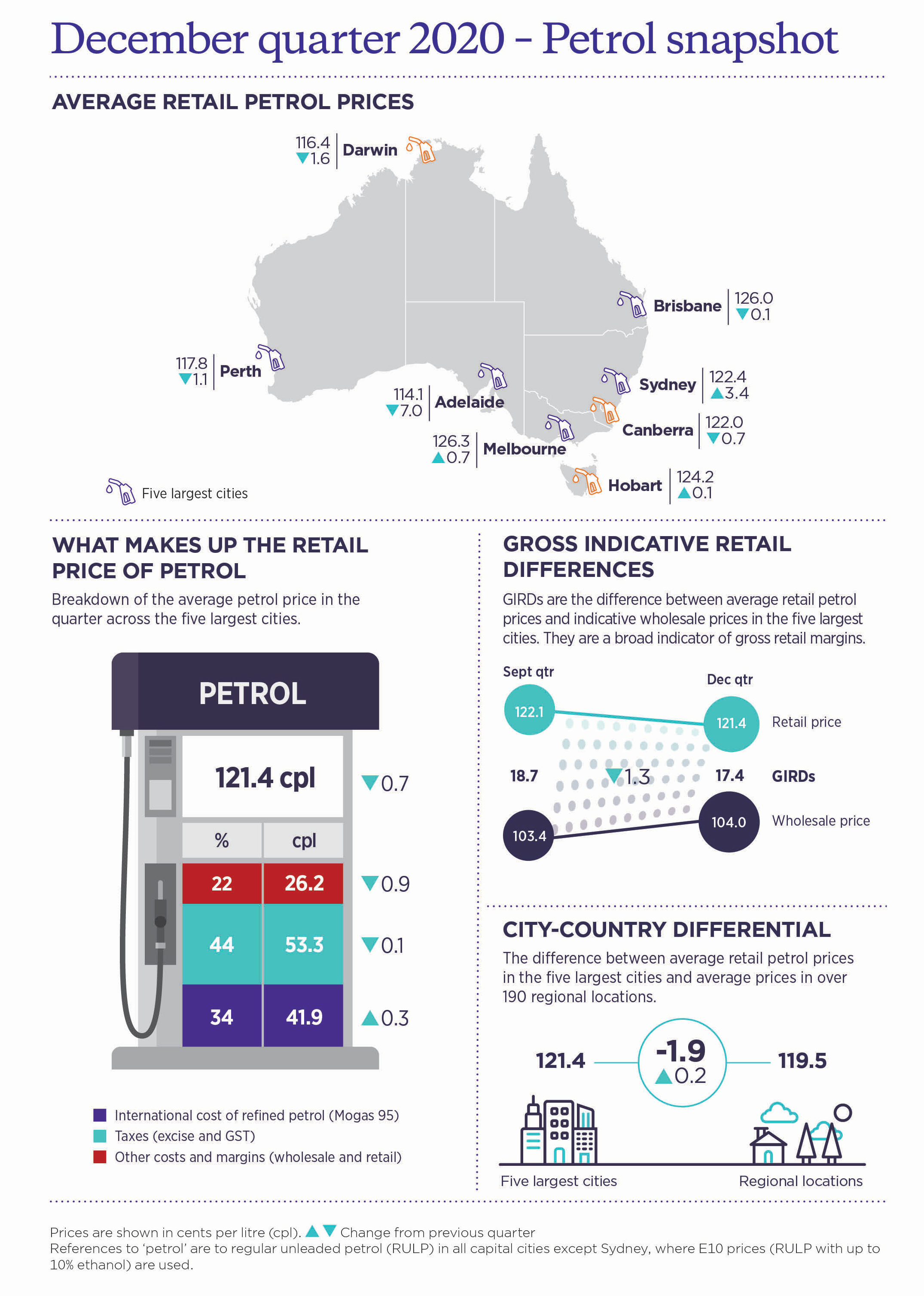