Oscar Wylee penalised $3.5m for 'buy a pair, give a pair' charity claims

Eyewear retailer Oscar Wylee has been ordered by the Federal Court to pay $3.5 million in penalties for misleading or deceptive conduct and making false or misleading representations about its charitable donations and affiliations, in breach of Australian Consumer Law.

Oscar Wylee admitted that between January 2014 and December 2018 it made statements in its social media posts, emails, on its website, and promotional merchandise that for each pair of glasses a consumer purchased, it donated another pair of glasses to someone in need, when it did not do so.

“Oscar Wylee promoted its charitable activities as a core reason why consumers should buy Oscar Wylee glasses, but its claims were false and were made in circumstances where consumers could not easily verify these claims for themselves,” ACCC Deputy Chair Delia Rickard said.

“The misleading conduct also portrayed Oscar Wylee as a socially-conscious company that made significant donations of glasses to people in need, which, because this was not true, unfairly differentiated it from other brands in the market.”

“At the same time, Oscar Wylee deprived disadvantaged people in need of the benefits it promised in its advertising,” Ms Rickard said.

Oscar Wylee also admitted to making false or misleading representations to consumers between January 2014 and December 2018 that it was closely affiliated with the charitable organisation, Rose Charities.

These claims included statements like ‘We have partnered with Rose Charities which helps build sustainable eye care programs in Cambodia’ and ‘We’re funding Lim studying to be an eye surgeon so he can keep taking solutions into his own hands’.

In fact, Oscar Wylee’s association with Rose Charities during this period consisted of a single donation of $2,000 and 100 frames in 2014. No further donations or support were provided to Rose Charities after this time, despite Oscar Wylee continuing to claim an affiliation with the charity until late 2018.

In her judgment, Justice Katzmann said: “Oscar Wylee stood to profit from inducing consumers to purchase its products and still does. It built its reputation by engaging in the contravening conduct, appealing to socially-conscious consumers who wanted to support charitable causes through their purchasing behaviour. Its conduct was a betrayal of that promise.”

In about 2013, the company also published a promotional video on its website and social media under the ‘I care for eyecare’ slogan, which claimed that ‘Oscar Wylee helps out through a range of different ways. From the performance of eye tests, distribution of glasses, performance of cataracts surgeries, and training of eye doctors’.

“Oscar Wylee has taken advantage of the charitable nature and goodwill of consumers and its behaviour risks diminishing consumer confidence to support other businesses that genuinely engage in philanthropic activities,” Ms Rickard said.

“This penalty should serve as a reminder for any company considering making false claims to its customers in its marketing material, whether online, by email, on video, on social media or in store.”

In addition to imposing penalties, the Court also ordered Oscar Wylee to publish information online explaining its breaches of the ACL, and pay a contribution to the ACCC’s costs.

Oscar Wylee admitted liability and made joint submissions with the ACCC to the Federal Court consenting to the orders sought.

Oscar Wylee, an Australian optometry and eyewear retailer, commenced operations in 2012, initially operating solely as an online retailer, marketing to consumers through its website, social media platforms, including Facebook and Instagram, and by email newsletters. In 2015, Oscar Wylee opened its first bricks and mortar retail stores, which now number over 60.

In 2013, prior to the period at issue in the proceedings, Oscar Wylee also made a donation of $2,000 to Rose Charities.

Examples of Oscar Wylee marketing claims are below: 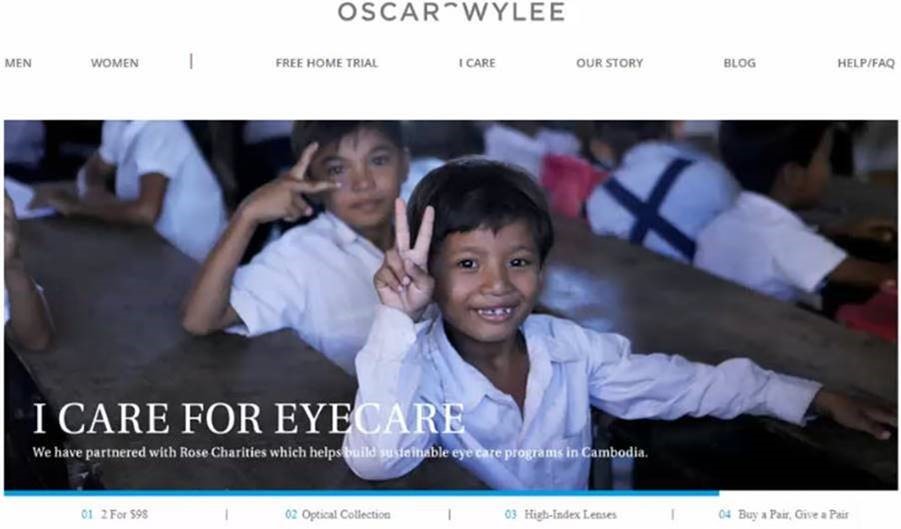