Daily petrol prices on a seven-day rolling average basis in Sydney, Melbourne, Brisbane, Adelaide and Perth increased to 172.4 cents per litre (cpl) at the end of October 2021, which in inflation adjusted (real) terms are the highest prices in seven years, the ACCC’s latest petrol monitoring report shows. 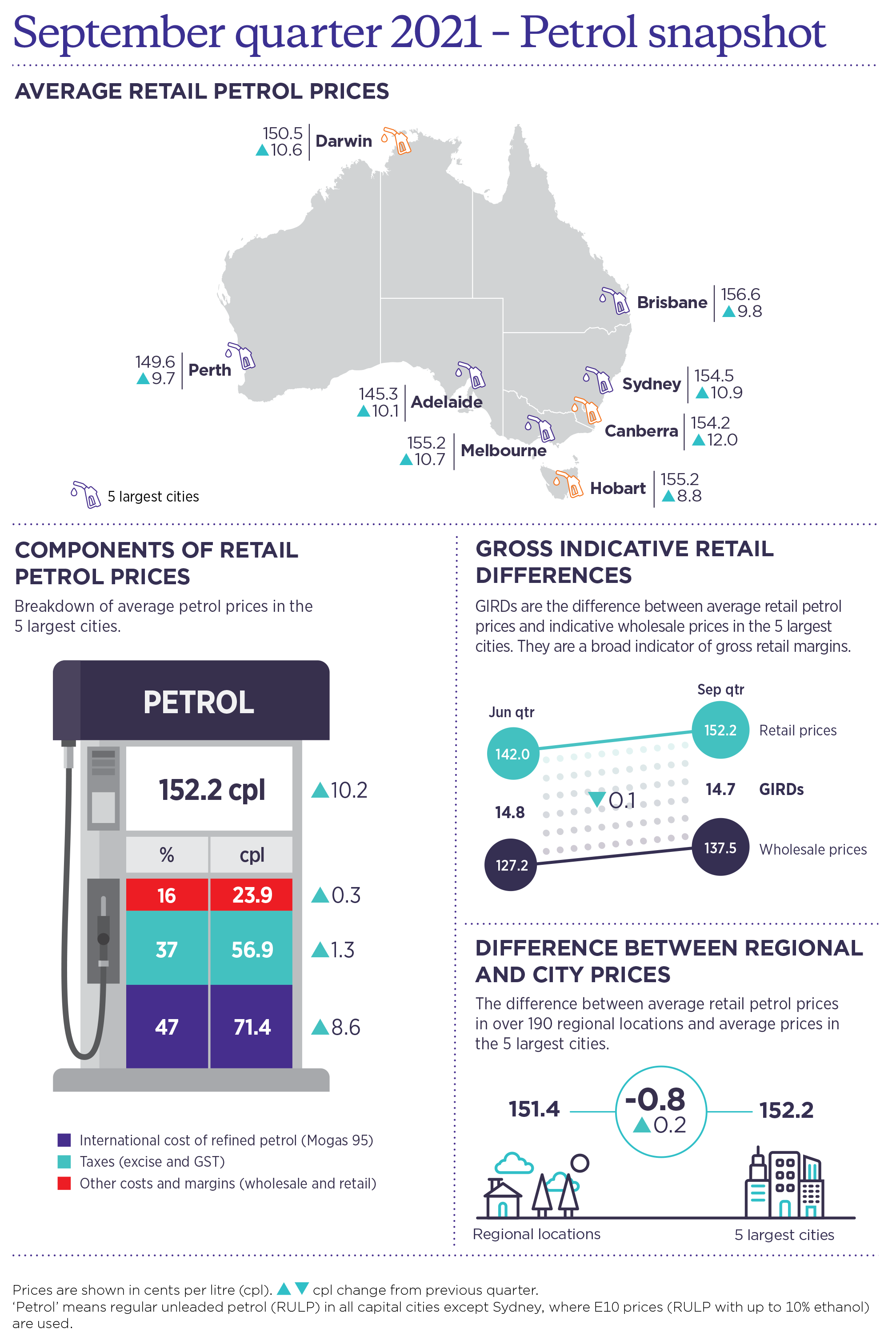 The report looks at the September quarter 2021 but provides additional data and analysis to November 2021, as there were significant increases in international refined petrol prices and Australian retail prices after September.

In October 2021, the key international petrol benchmark for Australia (Mogas 95), hit 83.7 cpl, which in real terms was the highest monthly average in seven years.

The report shows that Australian petrol prices have been increasing since November 2020, after reaching record lows in April 2020 following the initial impact of COVID-19. In November 2021, motorists in the five largest cities on average were paying around 48.0 cpl more for petrol than they were a year ago.

“Many people are rightly upset about the pressure that the current high petrol prices are putting on their household budget. It is important to understand that this is predominately due to higher international prices and the actions of the OPEC cartel,” Mr Sims said.

OPEC and other crude oil producing countries, including Russia, have only marginally increased supply since agreeing on major production cuts in the middle of last year. As a result, weekly average crude oil prices more than doubled from about USD 38 per barrel in early November 2020, to about USD 85 per barrel at the end of October 2021.

International demand for crude oil increased in the September quarter 2021 as more economies started opening up after COVID-19 restrictions, and parts of Europe and Asia affected by the Northern Hemisphere energy crisis turned to crude oil as an alternative to gas and coal.

“We will continue to keep a very close eye on the petrol market, and now that the international refined petrol price has started falling, we expect to see retail prices here do the same.”

Average retail petrol prices in the five largest cities in the September quarter 2021 increased by 10.2 cpl.

Average retail prices in Adelaide were 145.3 cpl in the September quarter 2021, which is the lowest of all the capital cities. This was the second consecutive quarter in which Adelaide had the lowest average prices.

The introduction of the South Australian fuel price transparency scheme in March this year appears to have had a positive impact in Adelaide as retail prices at the peak of many price cycles were noticeably lower after the scheme commenced.

All jurisdictions apart from Victoria and the Australian Capital Territory now have government mandated fuel price transparency schemes that are both comprehensive and timely. The ACCC has long been a supporter of such schemes.

“With petrol prices currently very high, it is more important than ever for motorists to use the available apps and websites to find cheaper fuel,” Mr Sims said.

“With Melbourne experiencing relatively higher prices in the September quarter 2021, Victorian consumers would certainly benefit from a comprehensive and timely fuel price transparency scheme to locate the cheapest service stations.”

“Prices can vary significantly in many cities, so giving your business to the retailer with the cheapest fuel is the strongest message you can send,” Mr Sims said.

In the September quarter 2021, the average price across the more than 190 regional locations the ACCC monitors was 151.4 cpl, which was 0.8 cpl lower than average prices in the five largest cities (152.2 cpl).

This was the fifth quarter in a row in which average regional petrol prices were lower than average prices in the five largest cities.

One possible reason for this is that the five largest cities have faced more lockdowns during the pandemic, and retailers experiencing lower sales volumes may have been setting prices higher to partially cover their fixed costs. Retailers in regional locations may not have had the same incentive to increase their retail prices by as much, given many have experienced more stable demand.

The influence of these two factors is likely to vary between regional locations.

Source:  ACCC calculations based on data from Informed Sources, FUELtrac, Platts, OPIS, Argus Media, the Reserve Bank of Australia and the Australian Bureau of Statistics, 6401.0 Consumer Price Index, Australia, September 2021, Tables 1 and 2. CPI: All Groups, Index Numbers and Percentage Changes, are available on the ABS website.

On 16 December 2019, the Treasurer issued a new Direction to the ACCC to monitor the prices, costs and profits relating to the supply of petroleum products in the petroleum industry in Australia and produce a report every quarter. This is the eighth quarterly petrol monitoring report under the new Direction.