Next step for consumer data right in energy

The ACCC is progressing the most reliable, secure and efficient way to share data with energy service providers under the Consumer Data Right (CDR) reforms, bringing consumers one step closer to being able to better determine the right energy plan for them.

The Australian Energy Market Operator (AEMO) “gateway model” has been chosen as the preferred data access model, with details outlined in a paper published today. Under this model, AEMO provides data on consumer’s current electricity arrangements from their current provider to trusted third parties when authorised by the consumer.

“Sharing information such as a household’s current energy deal and consumption pattern with other energy service providers will enable a consumer to find the best deal for them,” said ACCC Commissioner Sarah Court.

“This will enhance transparency and put consumers into the driving seat when it comes to comparing confusing deals, so they can find new and innovative offers that best suit them.”

The ACCC compared three data access models and consulted with stakeholders before reaching its decision.

“The gateway model best balances functionality, cost effectiveness, flexibility and security while also leveraging AEMO’s data and IT expertise. It allows AEMO to facilitate the rollout of the CDR to the energy sector, helping to reduce implementation costs particularly for smaller energy retailers,” Ms Court said.

The ACCC will now develop rules to accommodate energy-specific arrangements, including appropriate authorisation and authentication models. The ACCC will continue to consult with stakeholders on the next stages in the development of the CDR. 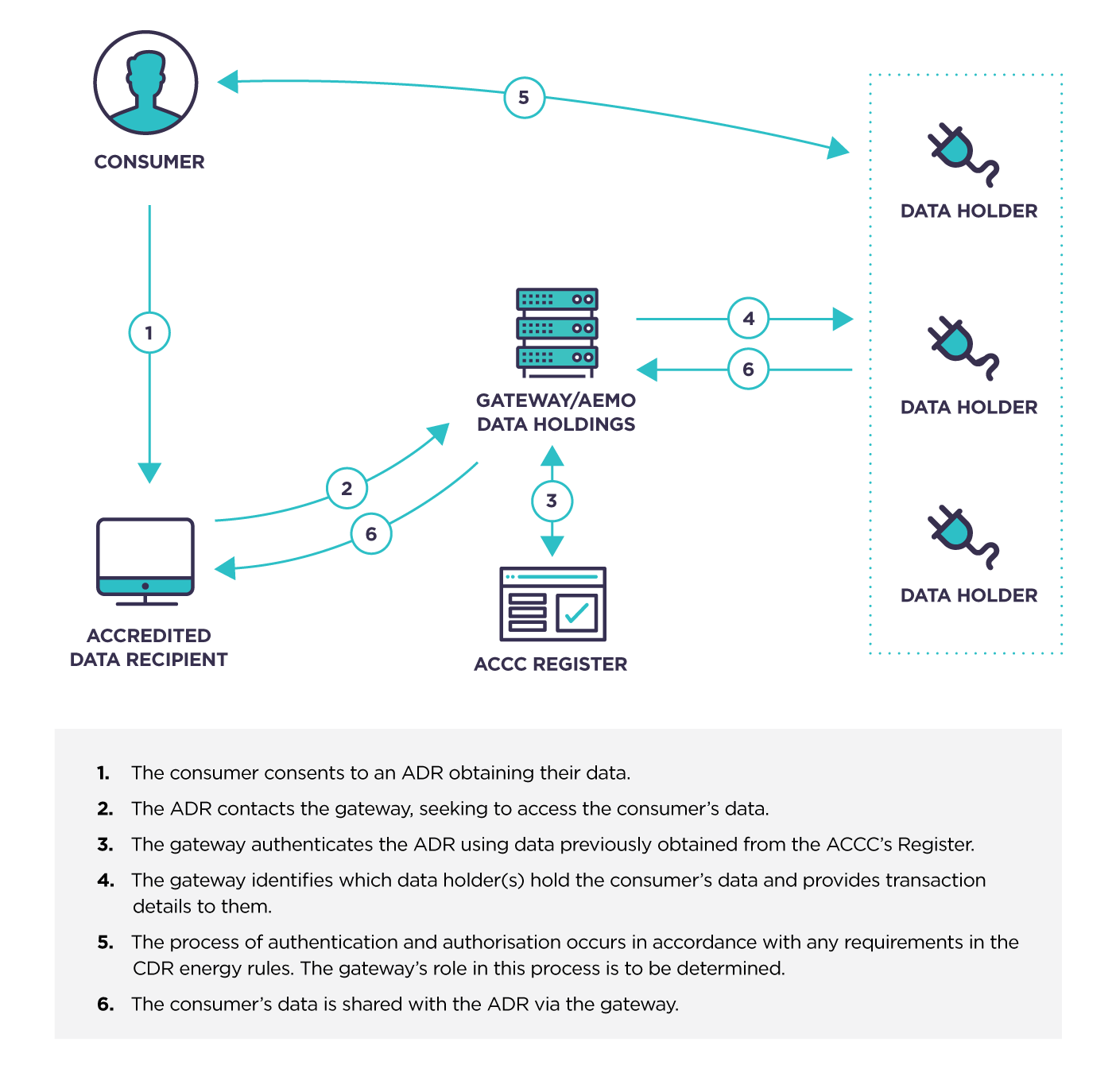 The CDR in energy will apply initially only in states in the National Electricity Market (which excludes Western Australia and the Northern Territory).

The ACCC will continue to assist the Treasury with its work on determining the scope and content of the initial designation instrument for the energy sector, and the designation of a gateway.

The release of the ACCC’s position follows consultation on the draft rules for the CDR.

Further information about the ACCC’s consumer data right role can be found at www.accc.gov.au/consumerdataright. Questions or queries can be directed to ACCC‑CDR@accc.gov.au.

For queries about consumer data right legislation and amendments, please visit https://treasury.gov.au/consumer-data-right/ or contact the Treasury at data@treasury.gov.au.

The Consumer Data Right is a competition and consumer reform announced by the Australian Government in May 2018. The consumer data right will be implemented first in the banking sector and then in the energy and telecommunications sectors.

The ACCC has the lead role in the implementation of the consumer data right but will be working closely with the Data Standards Body (hosted by Data61 at the CSIRO) and the Australian Information Commissioner (OAIC). The ACCC’s roles include rule-making, consumer education and enforcement.

The ACCC rules will be a key determinant of the data-sharing obligations in sectors covered by the CDR. Relevant CDR data will need to be shared in accordance with the data standards set by the Data Standards Body.

Following the announcement of the reform, the ACCC published a Rules Framework in September 2018 and a Rules Outline in December 2018. These have been developed in the banking context but many elements will be transferrable to energy and adapted to reflect the energy model released today.

The Treasury Laws Amendment (Consumer Data Right) Act 2019 was passed on 1 August 2019 and paves the way for consumers and small businesses to consent to securely share data with trusted third parties.

The ACCC published a discussion paper on the best energy data access model in February 2019.