Australian Competition and Consumer Commission Chairman Rod Sims has urged motorists to shop around now to find the best deal before price cycles push petrol prices higher. The ACCC is concerned that petrol prices are increasing in Sydney, and those in Melbourne, Brisbane and Adelaide may increase in coming days, following largely OPEC-inspired recent increases in wholesale petrol prices.

“The ACCC is concerned that petrol prices are increasing in Sydney, and those in Melbourne, Brisbane and Adelaide may increase in the coming days, so motorists should get in early, shop around, and consider filling their tanks before prices jump,” ACCC Chairman Rod Sims said.

Consumers can use information on capital city price cycles on the ACCC website to determine the best time to purchase petrol, and a number of the available fuel price apps to determine the lower priced sites in their area.

In Sydney motorists can use the Fuelcheck website to find the cheapest prices (see chart 6 below).

“While petrol prices are increasing in Sydney there are still sites with low prices, and motorists can make significant savings by using tools such as the Fuelcheck website to shop around,” Mr Sims said.

ACCC analysis of petrol sales throughout the year indicates that demand for petrol is higher in the weeks leading up to Christmas but falls significantly afterwards.  Demand for petrol is relatively low in early-January but picks up again in late-January (see chart 7 below).

“Motorists are advised to consider purchasing now when petrol prices are relatively low or have not yet reached their peak, and not wait until they need to fill up,” Mr Sims said.

In Perth, which has regular weekly price cycles, prices are generally at their lowest on a Monday and peak on a Tuesday. “With the regular petrol price cycles in Perth, motorists are encouraged to buy their petrol a day or two before Tuesday to take advantage of the cycles.”

ACCC monitoring of petrol prices in Sydney, Melbourne, Brisbane and Adelaide in recent weeks indicates that these cities have shown similar patterns of a peak followed by a long period of slowly decreasing prices. While this pattern has varied between cities, all have recently experienced price decreases.

“While price drops over the Christmas period provided some relief for motorists, this followed some of the highest price peaks of the year. Motorists were still paying relatively high prices during the lead-up to Christmas which coincides with the peak in annual petrol demand,” Mr Sims said.

“This was particularly the case in Brisbane, which continues to have the highest average prices of the five largest cities.”

Wholesale petrol prices, reflected in terminal gate prices (TGPs), are currently at their highest levels since September 2015, due to increases in international crude oil and refined petrol prices. These followed the announcement in late-November 2016 of an agreement by the OPEC cartel to limit production, and a subsequent announcement in mid-December 2016 of an agreement between the OPEC cartel and a number of non-OPEC countries (including Russia) to reduce production. Australian wholesale prices also increased following a decrease in the Australian/US dollar exchange rate.

“Along with the falling exchange rate, the OPEC agreements are the primary reason for increases in wholesale petrol prices over the past six weeks and why motorists are likely to see higher petrol prices in the near future,” Mr Sims said.

“The OPEC cartel, therefore, continues to cause Australian motorists to pay much more for petrol than they should.”

The charts below show daily average retail petrol prices and daily average terminal gate prices (wholesale prices) in the five largest cities between 19 November 2016 and 3 January 2017. Prices are for regular unleaded petrol (RULP) in all cities except Sydney which are E10 prices.

In Sydney, E10 petrol prices peaked on 11 December 2016 at around 130 cents per litre (cpl) before decreasing to around 119 cpl on 3 January 2017. Prices have started to increase at some service stations in Sydney. 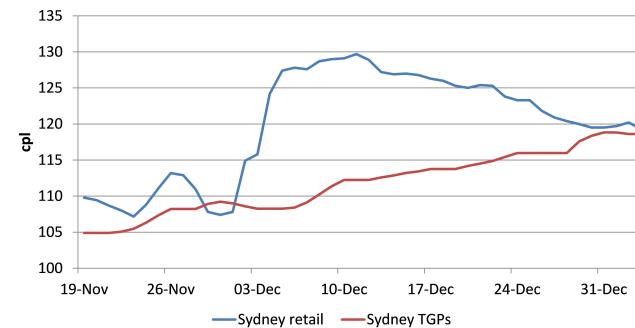 In Melbourne, petrol prices peaked significantly earlier – on 17 November 2016 – and have been decreasing very slowly since. Over the 46 days to 3 January 2017, petrol prices decreased by around 7 cpl. 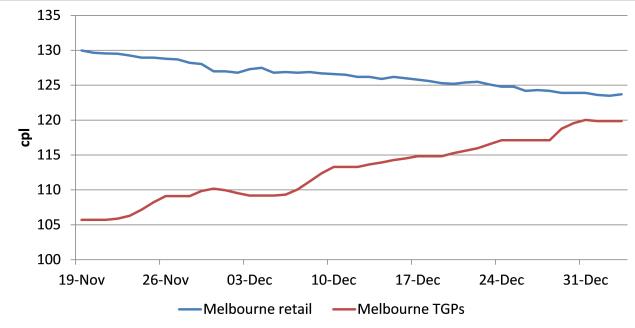 The ACCC is currently undertaking a market study into the Cairns petrol market and is looking at Brisbane petrol prices in that context. In addition, the ACCC has been informed by industry that additional costs associated with the introduction of the ethanol mandate in Queensland on 1 January 2017 may have had some influence on higher margins in Brisbane. 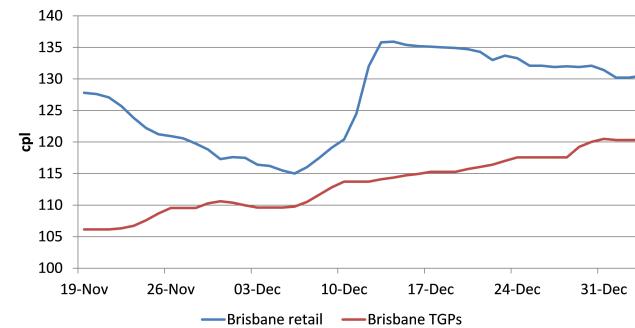 In Adelaide petrol prices peaked on 6 December 2016 at around 129 cpl before decreasing to around 122 cpl on 3 January. 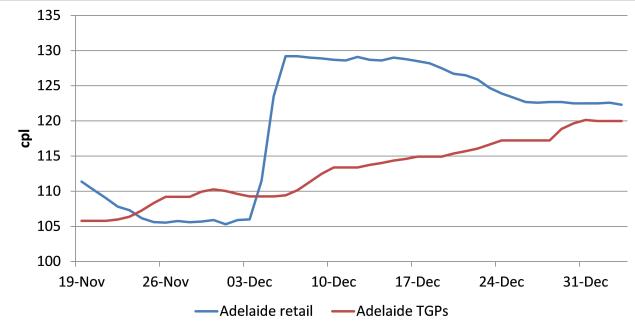 In contrast to the other cities, Perth has a regular weekly price cycle, with prices generally peaking on Tuesday and then decreasing to a low on Monday. The peak price on 21 November 2016 was around 127 cpl. The peak price of the latest cycle (on 3 January 2017) was around 139 cpl. 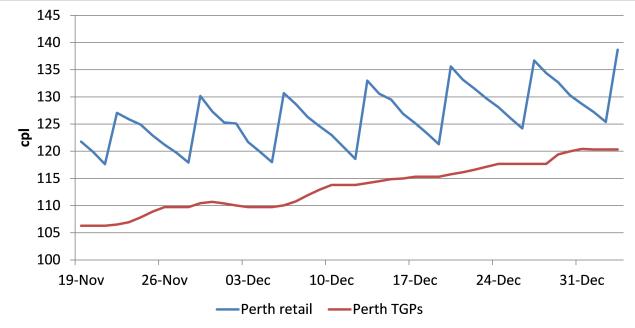 “Although we are currently in the lowest period of petrol demand for the year, we recommend that motorists in the eastern capital cities fill up as soon as they can, and for Perth motorists to fill up before Tuesday,” Mr Sims said. 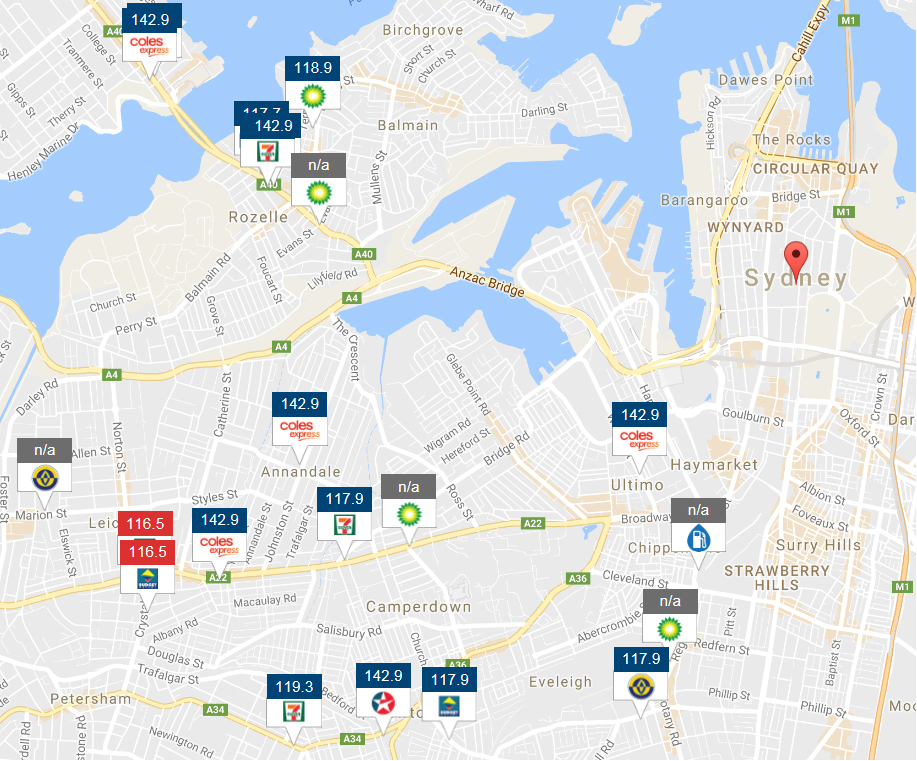 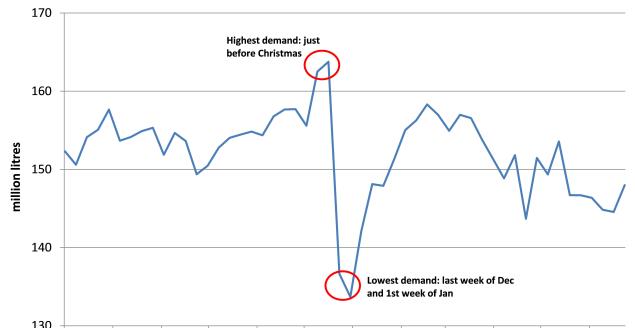