The ACCC’s latest petrol monitoring report shows that in the weeks after the fuel excise was cut on 30 March, daily average petrol prices fell by at least 39 cents per litre (cpl) in Sydney, Melbourne, Brisbane, Perth and Adelaide. In Canberra, Hobart and Darwin over the same period, prices fell by between 25 and 48 cpl.

The fuel excise cut plus the associated decrease in GST totalled 24.3 cpl but temporary falls in international refined petrol prices in early April, as well as simultaneous price cycle declines in most of the five largest cities, boosted the savings to many motorists.

Daily average petrol prices calculated across the five largest cities decreased by around 42 cpl between 29 March and 19 April. Over the same period, daily average wholesale prices decreased by around 36 cpl. However, from mid-April higher international refined petrol prices stemming from Russia’s war in Ukraine again pushed up wholesale and retail prices in Australia.

“We can see from our petrol market monitoring that the cut to the fuel excise has been passed on to Australian motorists in the vast majority of locations,” ACCC Chair Gina Cass-Gottlieb said.

Daily average retail petrol prices and terminal gate prices in nominal terms in the five largest cities: 11 March to 10 May 2022

“Retail petrol prices will still fluctuate with changes in international prices and the price cycles in the largest capital cities, even though the excise cut has flowed through to the bowser,” Ms Cass-Gottlieb said.

“Our monitoring will continue for the duration of the excise cuts. Petrol retailers who fail to maintain the cuts can expect to hear from us.”

In the March quarter this year, quarterly average retail petrol prices in the five largest cities were 181.9 cpl, an increase of 19.1 cpl from the December quarter 2021 (162.8 cpl). This was the fifth consecutive quarter in which prices have increased.

Between the December quarter 2020 and the March quarter 2022, average retail prices increased by about 50 per cent.

Source:  ACCC calculations based on data from FUELtrac.

Notes: The area to the right of the dotted vertical line represents the March quarter 2022. A 7-day rolling average price is the average of the current day’s price and prices on the 6 previous days.

In real terms, prices in the March quarter 2022 were some of the highest in the past 20 years, and the highest since July 2008.

Singapore’s Mogas 95 is the relevant benchmark for petrol prices in Australia.

“Our domestic retail petrol prices largely follow the international benchmark price because most of the fuel we use in Australia is imported,” Ms Cass-Gottlieb said.

“It takes around one to two weeks for a change in the price of Mogas 95 to flow on to the retail price of petrol in Australia’s largest capital cities.”

In the March quarter 2022, crude oil prices increased sharply due to geo-political tensions around Russia’s war in Ukraine, stronger demand from the easing of the global pandemic and slower crude oil production growth. Numerous countries imposed sanctions against Russian companies and stopped buying Russian crude oil, which led to global shortages as Russia is a major oil supplier.

Gross indicative retail differences (GIRDs) are the difference between average retail prices and average wholesale prices, and they broadly indicate gross retail margins. As GIRDs do not account for retail operating costs, they should not be interpreted as actual retail profits.

In the March 2022 quarter, average GIRDs in the five largest cities fell slightly to 13.4 cpl.

Average GIRDs in the five largest cities have trended downwards over the last six quarters, after hitting a record high in the September quarter 2020 (18.7 cpl). Average GIRDs decreased by 5.3 cpl over the 6 quarters to below pre-pandemic levels.

“When wholesale prices increase significantly in a short period, the lag between changes in wholesale and retail prices can have the effect of reducing gross retail margins,” Ms Cass-Gottlieb said.

“During lockdown periods of the pandemic, some retailers may have increased their margins to offset lower sales volumes and cover their fixed costs. But margins have declined again as demand for petrol has returned and sales volumes have increased.” 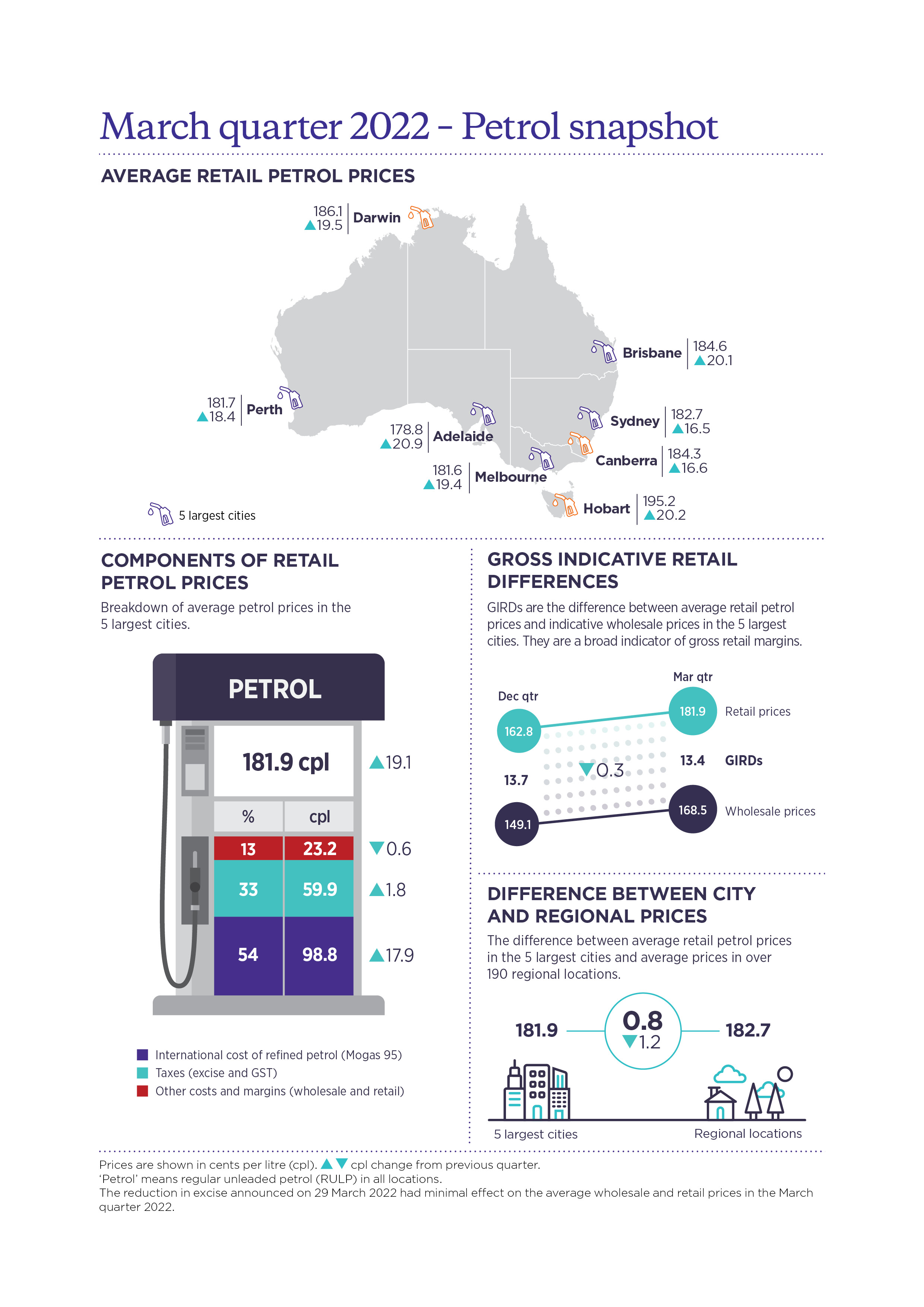 On 16 December 2019, the Treasurer issued a new Direction to the ACCC to monitor the prices, costs and profits relating to the supply of petroleum products in the petroleum industry in Australia and produce a report every quarter. This is the tenth quarterly petrol monitoring report under the new Direction.

‘Terminal gate prices (TGPs)’ are prices that wholesalers charge for petrol in the spot market (ie picking fuel up at a terminal). TGPs are posted by the major wholesalers on their websites on a regular basis and can be considered as indicative wholesale prices.