The Australian Competition and Consumer Commission’s latest Small Business in Focus report reveals that micro and small businesses made 7,000 complaints and enquiries from July 1 to December 31 2016.

“Over 60 per cent of business contacts were from micro enterprises of four or under employees, which isn’t surprising given that micro firms are the biggest group of businesses in Australia,” ACCC Acting Chair Dr Michael Schaper said.

“In the past six months, the SME sector has been particularly concerned about misleading conduct and false representations with 735 complaints, consumer guarantees issues with 329 complaints, followed by misuse of market power concerns with 95 complaints.”

“Fewer franchisees have been reporting issues to the ACCC since the introduction of the new Franchising Code in January 2015. After an initial spike averaging 52 franchising complaints in the first six months of 2015, complaints have fallen to 32 a month by the end of 2016,” Dr Schaper said.

“The ACCC received 185 complaints from small businesses in the agriculture sector, a substantial increase from the previous six months. In the July to December period, the cattle and beef market study interim report was released, our dairy inquiry began, we conducted the first round of audits of signatories to the Food and Grocery Code, and our report into the horticulture and viticulture sectors was also published.”

Other key developments in the past six months:

“This year, we expect that the ban on excessive payment surcharging for all businesses on September 1 will generate significant interest from the business community. We have prepared advice for small business on the new credit card surcharging laws, which I hope all businesses will consult,” Dr Schaper said.

“We will also be releasing draft findings of our market study into the new car retailing industry mid-year, a matter of interest to many small businesses who operate in the industry or rely on new cars for their work. Businesses will have an opportunity to make a submission on the draft findings when it becomes available.”

Small Business in Focus is available at: http://www.accc.gov.au/publications/small-business-in-focus 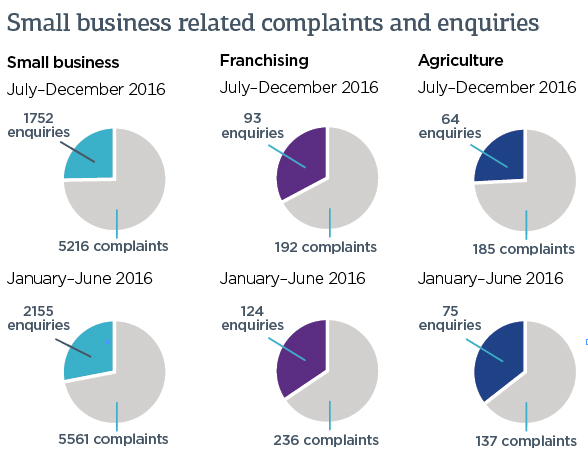