Average petrol prices in the five largest cities, Sydney, Melbourne, Brisbane, Adelaide and Perth, were at their lowest levels in more than two years during the March quarter but prices are trending upwards.

The ACCC’s March 2019 Petrol monitoring report shows average retail petrol prices across the five largest cities were 130.3 cents per litre (cpl) during the quarter. This was a decrease of 11.8 cpl from the December quarter 2018 (142.1 cpl).

Daily petrol prices were at their cheapest in early January, but increased by around 30 cpl during the quarter.

Petrol prices have continued to increase since March 2019. Monthly average petrol prices in the five largest cities increased by 9.0 cpl in April 2019 to 146.3 cpl. Daily petrol prices reached a high of 152.9 cpl in late April. This increase has been driven by crude oil prices increasing due to continued production cuts by the OPEC cartel and Russia, and supply disruptions in Venezuela, Libya and Sudan.

A significant development in the quarter was the announcement by Viva Energy that it will be setting the retail prices at Coles Express retail sites. This, combined with the completion of the sale of Woolworths retail fuel sites to Euro Garages in early April, represents a fundamental change in the retail petrol market. At the height of their market presence in 2012-13, the supermarket chains accounted for more than 50 per cent of the retail petrol market by volume.

“The presence of the supermarket chains in the retail petrol market has significantly reduced recently after having a large presence for many years. We’ll be carefully watching the pricing practices of Viva Energy and Euro Garages and seeing what impact this has on the market,” Mr Sims said.

Other fast facts from the latest petrol monitoring report: 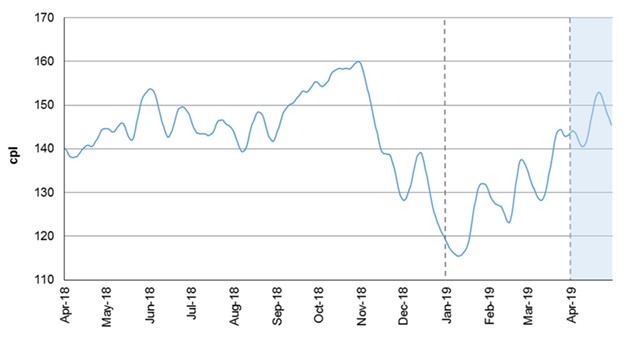 On 20 December 2017, the Treasurer issued a new Direction to the ACCC to monitor the prices, costs and profits relating to the supply of petroleum products and related services in the petroleum industry in Australia.

Under the new Direction, the ACCC produces quarterly petrol monitoring reports focusing on price movements in the capital cities and over 190 regional locations across Australia. It also produces industry reports that focus on particular aspects of consumer interest in the fuel market in relation to prices, costs and profits. Today’s report was the sixth quarterly report published under the Direction.

Gross retail margins are the difference between average retail prices and average wholesale prices. As they do not include costs, gross retail margins should not be confused with actual retail profits. These margins are averages across the five largest cities over time. The level of prices, costs and profits vary significantly between retail operations and not all petrol retailing sites will be achieving these margins. Some will be achieving higher margins, others lower.