The Federal Court has ordered Lorna Jane Pty Ltd (Lorna Jane), to pay $5 million in penalties for making false and misleading representations to consumers, and engaging in conduct liable to mislead the public, in connection with the promotion and supply of its “LJ Shield Activewear”.

Lorna Jane Pty Ltd admitted that, between 2 and 23 July 2020, it falsely represented to consumers that its LJ Shield Activewear “eliminated”, “stopped the spread” and “protected wearers” against “viruses including COVID-19”. The misleading representations were made on in-store signage, on its website, on Instagram, in emails to consumers and in media releases.

The claims made by Lorna Jane about its LJ Shield Activewear included “Cure for the Spread of COVID-19? Lorna Jane Thinks So” and “LJ SHIELD is a groundbreaking technology that makes transferal of all pathogens to your Activewear (and let’s face it, the one we’re all thinking about is Covid-19) impossible by eliminating the virus on contact with the fabric”.

“The whole marketing campaign was based upon consumers’ desire for greater protection against the global pandemic.”

“The $5 million in penalties imposed by the Court highlights the seriousness of Lorna Jane’s conduct, which the judge called ‘exploitative, predatory and potentially dangerous’,” Mr Sims said.

Lorna Jane also admitted that it had falsely represented it had a scientific or technological basis for making the ‘anti-virus’ claims about its LJ Shield Activewear, when no such basis existed. The company admitted that it did not have any scientific testing results showing the effectiveness of LJ Shield Activewear on viruses, including COVID-19, nor did it have any scientific results or evidence which would establish the truth of the representations.

Lorna Jane also admitted that director and Chief Creative Officer, Ms Lorna Jane Clarkson, authorised and approved the LJ Shield Activewear promotional material, was involved in crafting the words and developing the imagery used in the marketing campaign, and personally made some of the false statements contained in a media release and an Instagram video.

The judge also said he had taken into account that ‘the conduct emanated from a high managerial level within the company’ and ‘was directed by Ms Clarkson’.

“This was dreadful conduct as it involved making serious claims regarding public health when there was no basis for them,” Mr Sims said.

“This type of conduct is particularly harmful where, as here, consumers cannot easily check or monitor the claims made.”

Before the start of a hearing on liability, Lorna Jane cooperated with the ACCC, making admissions and agreeing to make joint submissions regarding the imposition of penalties totalling $5 million.

The Court also ordered by consent that for a period of three years, Lorna Jane is restrained from making any “anti-virus” claims regarding its activewear clothing unless it has a reasonable basis for doing so, must publish corrective notices across the mediums utilised in the marketing campaign, must establish a consumer law compliance program, and must pay the ACCC’s costs.

On 17 July 2020, the Therapeutic Good Administration (TGA) issued three infringement notices to Lorna Jane in connection with its marketing campaign, with penalties totalling $39,960. The TGA’s infringement notices related to Lorna Jane’s failure to register goods on the Australian register of therapeutic goods, a breach of the advertising code and Lorna Jane’s failure to seek TGA approval prior to making certain claims.

These example images were used across various media that formed part of the LJ Shield Activewear marketing campaign in July 2020: 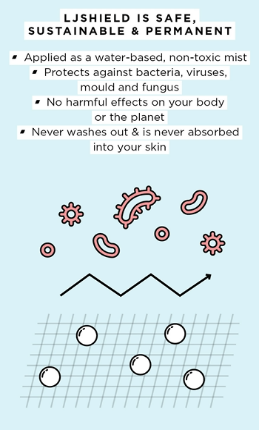 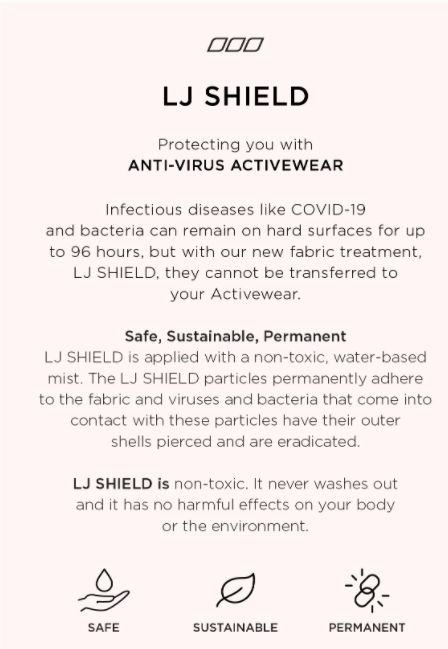