The ACCC’s July 2022 Interim gas report, released today, forecasts the east coast of Australia could face a shortfall of 56 PJ in 2023. At the same time last year, our Gas Inquiry interim report found 2022 could face a 2PJ shortfall.

“Our latest gas report finds that the outlook for the east coast gas market has significantly worsened. To protect energy security on the east coast we are recommending the Resources Minister initiate the first step of the Australian Domestic Gas Security Mechanism (ADGSM),” ACCC Chair Gina Cass-Gottlieb said.

“We are also strongly encouraging LNG exporters to immediately increase their supply into the market.”

Much of the gas produced in Australia’s east coast is produced by companies that are also LNG exporters.

The ACCC’s report raises concerns about the high level of market concentration, noting that LNG exporters and associates had influence over almost 90 per cent of the proven and probable (2P) reserves in the east coast in 2021 through direct interests, joint ventures and exclusivity arrangements.

The east coast of Australia is forecast to produce 1981 petajoules (PJ) of gas in 2023 of which 1299 PJ, or 65.6 per cent, is forecast to be exported overseas under long term contacts. LNG exporters are also expected to produce a further 167 PJ over what they require to meet their contractual commitments.

This excess gas is not contractually committed and could be supplied into either the domestic market or the international LNG market.

“Increasingly, LNG exporters have diverted most of their excess gas to overseas spot markets, with as much as 70 per cent of the excess volume going overseas in recent years,” Ms Cass-Gottlieb said.

“If LNG exporters were to provide all of their excess gas to overseas markets, the east coast gas market would be facing a supply shortfall 56 PJ.” 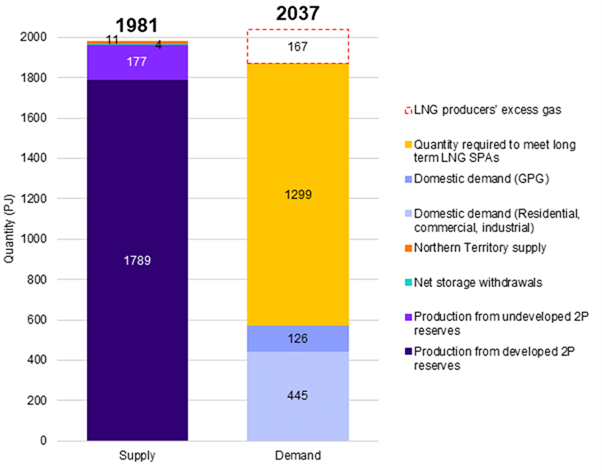 Source:    ACCC analysis of data obtained from gas producers as at May 2022 and of the domestic demand forecast (Progressive Change scenario) from AEMO's March 2022 GSOO. Note: Totals may not add up due to rounding. 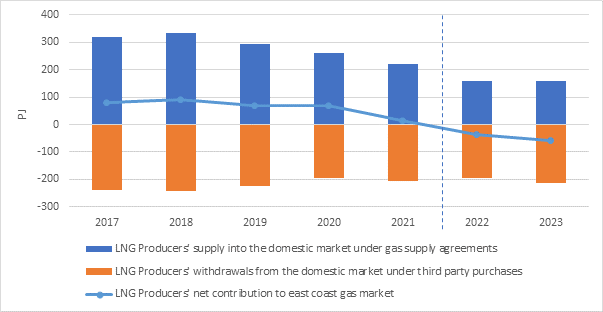 Source:    ACCC analysis of data obtained from LNG exporters as at May 2022.

A well-functioning Heads of Agreement with LNG exporters could ensure that LNG exporters make gas broadly and transparently available to all domestic users (including commercial and industrial users and gas-powered generators and retailers) at demonstrably competitive prices, in volumes and for periods suitable to buyers' needs, and with sufficient notice.

The Government has committed to renegotiating the Heads of Agreement.

“Under the Heads of Agreement, exporters can offer excess gas to domestic market participants through an expression of interest process. We are concerned that domestic gas users don’t always have reasonable notice of these offers, and that LNG exporters do not make counter-offers to bids, which could indicate they are not seriously engaging in the domestic market,” Ms Cass-Gottlieb said.

“We welcome the announcement by the Minister for Resources that Australian Government has decided to review and renegotiate the ADGSM and the Heads of Agreement with LNG exporters,” Ms Cass-Gottlieb said. “Both mechanisms are critical to ensuring adequate supply to the domestic market in 2023 and future years.”

Concerns about upstream competition and the timeliness of supply

The ACCC has examined upstream competition and timeliness of supply and found that this market is highly concentrated and dominated by the three LNG exporters and their associates.

“With the high degree of concentration in this part of the market, we have observed that joint ventures, joint marketing and exclusivity arrangements are contributing to the lack of effective upstream competition in the east coast,” Ms Cass-Gottlieb said.

Our approach does not consider whether these purchases from third parties are 'third party export compatible gas' as defined in the ADGSM and as the question of determining if gas in 'third party export compatible gas' is a matter for the Minister for Resources under the ADGSM Guidelines, the ACCC has not collected information from parties that would help determine this question.

On 19 April 2017, the Australian Government directed the ACCC to conduct an inquiry into the supply of and demand for wholesale gas in Australia and publish regular information on the supply and pricing of gas for three years. On 25 July 2019, this inquiry was extended until December 2025.

On 21 January 2021, the Australian Government announced a new Heads of Agreement had been signed which commits LNG exporters to offer uncontracted gas to the domestic market first on internationally competitive market terms before it is exported. The new Heads of Agreement was entered into in late December 2020 and operates over 2021–23.

On 30 November 2021, gas suppliers and gas users agreed to a voluntary industry Code of Conduct for the negotiation and development of Gas Supply Agreements. The code was due to commence on 1 June 2022 but has been delayed.

On 7 February 2022, the ACCC received a direction from the then Assistant Treasurer to examine Incitec Pivot’s gas tender process for its Gibson Island plant.  We have reported on this using producers’ responses to compulsory information notices, in addition to information voluntarily provided by Incitec Pivot.

On 6 June 2022, the Treasurer wrote to the ACCC conveying his concern about the significant increases in wholesale electricity and gas prices and setting out his expectation that the ACCC will ensure the factors influencing prices in the market are made transparent, making any appropriate policy recommendations and investigate concerns about anti-competitive and false and misleading conduct in electricity and gas markets.