The Australian Competition and Consumer Commission has released its annual Airport Monitoring Report for 2014-15, finding that the monitored airports at Brisbane, Melbourne, Perth, and Sydney continue to enjoy high profit margins in both aeronautical and car parking activities.

The profit earned from a dollar of aeronautical revenue ranged from a low of 40.2 cents at Perth Airport to a high of 50.1 cents at Sydney Airport. Sydney Airport’s result is the highest by any monitored airport over the period from 2004-05 to 2014-15. Return on assets for aeronautical services ranged from a low of 6.2 per cent for Brisbane Airport to a high of 12.4 per cent for Sydney Airport with two airports (Melbourne and Perth) reporting declines in this measure for 2014-15 (however it should be noted that return on asset figures can be affected by airport revaluations of assets).

As the only suppliers of car parking on airport grounds, the four monitored airports continue to earn significant profits from car parking. The profits earned from a dollar of car parking revenue ranged from a low of 63.7 cents for Perth Airport to 73.2 cents for Melbourne Airport.

“The high profit margins of the airports indicate that they do not face much competitive pressure,” ACCC Chairman Rod Sims said.

However, savvy motorists are increasingly taking advantage of the discount rates available by booking car parking online. The discounts available may be a form of price discrimination as price conscious consumers will book ahead to receive discounts online, while less price sensitive consumers will pay higher drive-up prices.

“The ACCC found that consumers parking at the airports could save up to 66.5 per cent for longer durations by booking online,” Mr Sims said.

“Consumers should consider all of their options, including whether they could obtain a cheaper rate by booking online or using an off-airport parking operator.”

Despite the high profit margins the quality of service has not been increasing over the years. Brisbane Airport was once again found to have the highest quality of service of the four monitored airports. Both Brisbane and Perth were found to provide ‘good’ quality of service, while Melbourne and Sydney airports were again rated as ‘satisfactory’. These overall ratings are drawn from survey results (both airlines and passengers) and objective indicators.

However, quality of service may improve in the future on the back of new investment. Melbourne ($484 million), Brisbane ($334 million), and Perth ($250 million) each invested in aeronautical assets at record levels in 2014-15. Notable projects include the new runway at Brisbane Airport, the new domestic terminal at Melbourne Airport, and Perth Airport’s Terminal 1 International and Domestic Pier.

“Although airport investment tends to be lumpy in nature, the record levels of investment made by Melbourne, Brisbane, and Perth in 2014-15 will possibly drive welcome service improvements for passengers,” Mr Sims said.

“There is also some optimism regarding better quality of service at Sydney Airport in future, which agreed to a formalised service level agreement with international airlines.”

Passengers benefitted from an increased proportion of domestic flights that were on-time. The average proportion of arrivals and departures that were on-time in 2014-15 was the highest since 2006-07. The timeliness of flights can depend on factors such as the airline performance, weather, and passengers themselves. However, investment by airports can help to ensure that there is sufficient capacity for the number of flights per day.

Passenger growth across the airports was relatively flat during 2014-15. International passengers (3.7 per cent) grew more strongly than domestic passengers (0.7 per cent). The slowdown in the resources sector (and therefore flights by fly in, fly out workers) contributed to a 1.0 per cent fall in passengers at Perth Airport.

The 2014-15 report, data tables and an infographic illustrating the key statistical findings can be found here: Airport monitoring report 2014-15

The ACCC took a closer look at airport rail links in this year’s report and the extent to which they act as a constraint on the significant market power that airports possess with the supply of car parking services. There are existing rail links at Brisbane and Sydney Airports, while one is under construction in Perth. The report found that rail links do not appear to provide a strong constraint on airports’ car parking pricing, but rather they compete more closely with other modes of transport (such as taxis and other public transport services).

Over the past two years, monitored airports have raised concerns with the ACCC around the operations of the Australian Border Force (ABF) and delays for international passengers through customs. The ABF acknowledged to the ACCC that its past performance had suffered. However, both the ABF and airports said that recent performance had been significantly improved by the rollout of more technologically advanced SmartGates and increased staffing.

In April 2014, the Australian government confirmed its intentions to develop a new major airport in Western Sydney at Badgerys Creek. A second significant airport has the potential to provide competition with the current Sydney Airport which would drive reduced prices and/or improved facilities. However, this potential benefit was lost during the privatisation process when the Australian government provided the acquirer of Sydney (Kingsford Smith) Airport with the right of first refusal to develop and operate any second airport within 100 kilometres of the CBD.

The ACCC derives its quality of service information from responses to surveys of passengers, airlines and landside operators (such as off‑airport car parking operators, buses and taxis), as well as from objective data from the monitored airports. The ‘overall average quality of service’ measure is calculated as an average of these ratings (excluding responses from landside operators).

Comparisons between airports should be treated with caution because results can be affected by factors such as different terminal configurations, passenger mix, and different approaches to valuing assets.

The ACCC’s monitoring role does not involve direct regulation of monitored airports or any power to intervene in the airports’ setting of terms and conditions of access to their infrastructure.

Chart 1 presents aeronautical revenue per passenger (a proxy for average price) and aeronautical quality of service ratings in 2004-05 and 2014-15. The most favoured combination for a passenger of lower price and higher quality outcomes would be located in the lower right quadrant. While three of the airports were in this quadrant in 2004-05, there were no airports in this quadrant for 2014-15.

Chart 1: Aeronautical revenue per passenger (in real terms) and aeronautical quality of service ratings, 2004‑05 and 2014‑15 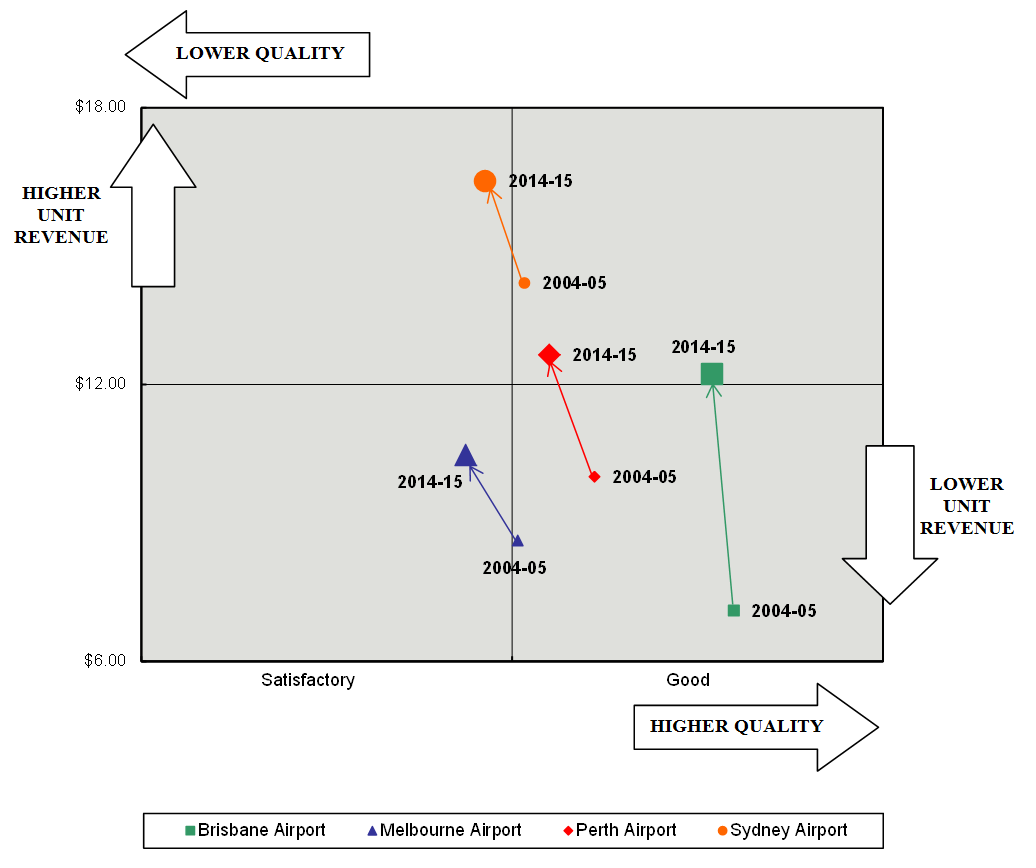 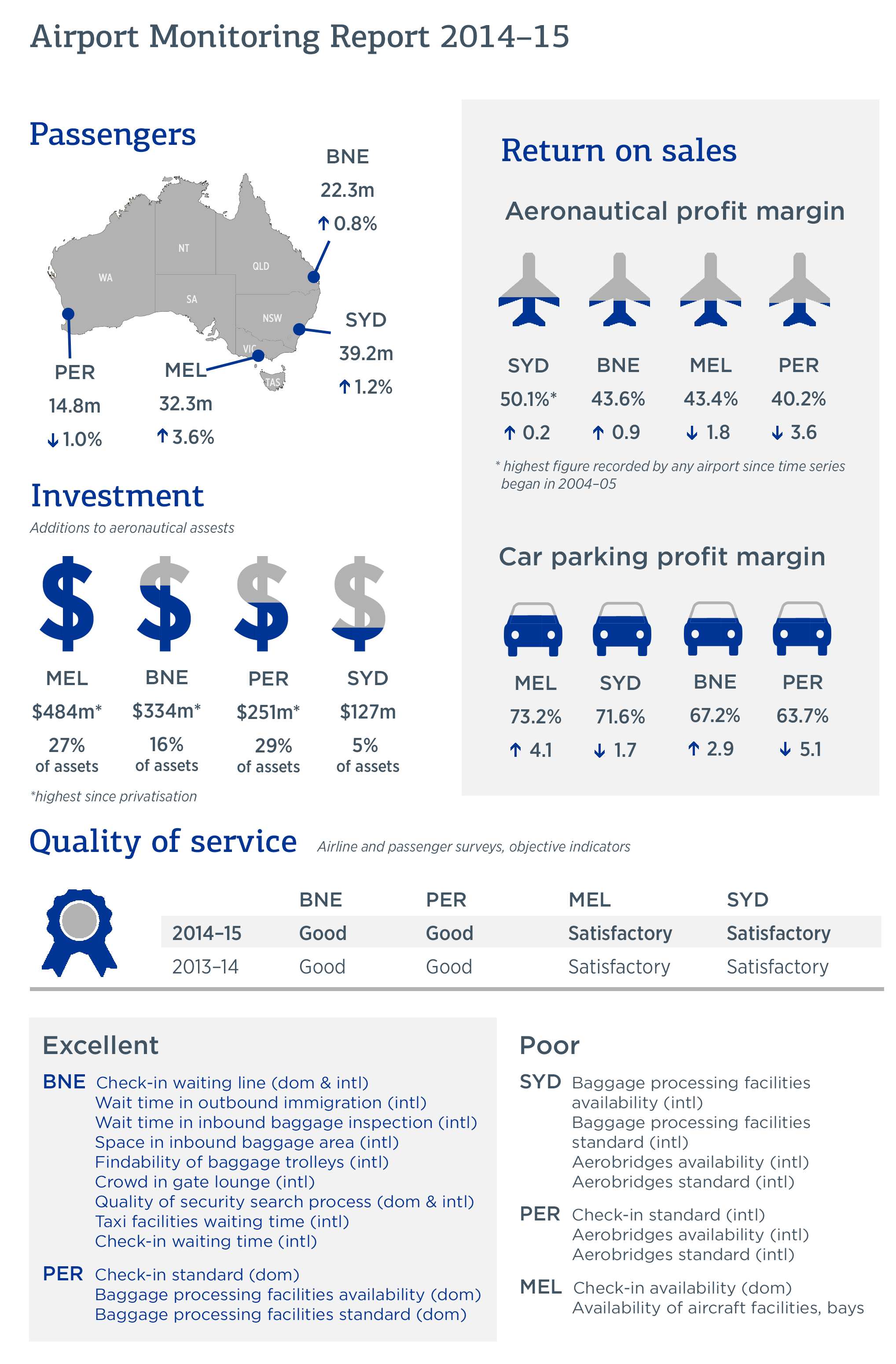