GSK and Novartis to pay $4.5 million in penalties over Voltaren Osteo Gel claims

The Federal Court has ordered that the makers of pain relief product Voltaren Osteo Gel pay $4.5 million in penalties for breaches of the Australian Consumer Law.

In May 2019 the Federal Court accepted admissions by Novartis Consumer Health Australasia Pty Ltd (Novartis) and GlaxoSmithKline Consumer Healthcare Australia Pty Ltd (GSK) that they made false or misleading representations in the marketing of Voltaren Osteo Gel and Voltaren Emulgel pain relief products.

From January 2012 to March 2017, Novartis and then GSK marketed Osteo Gel as being specifically formulated and more effective than Emulgel in treating osteoarthritis related pain and inflammation even though both had the same active ingredients.

Osteo Gel was often sold at a higher price than Emulgel and the gels were often displayed next to each other at pharmacies and grocery stores.

“Voltaren Osteo Gel and Voltaren Emulgel were essentially the same gel and were equally effective in treating osteoarthritis symptoms.”

“Novartis and GSK’s claims were particularly concerning because they set recommended retail prices for Osteo Gel above that of Emulgel, by up to 16%, and consumers were potentially misled into paying more for an identical product believing it was more effective,” Ms Court said.

The misleading claims were made on product packaging and the Voltaren website by both companies and Novartis also made the claims on the My Joint Health website.

In March 2017, GSK amended the Osteo Gel packaging to include the words ‘Same effective formula as Voltaren Emulgel’. The Court did not find that the revised packaging was misleading.

GSK and Novartis made joint submissions on penalties with the ACCC to the Court.

Both Osteo Gel and Emulgel products contain the same active ingredient, diclofenac diethylammonium gel 11.6mg/g, which acts in a non-specific manner to reduce local pain and inflammation wherever it is applied.

The ACCC instituted proceedings against GSK and Novartis in December 2017.

GSK stopped supplying the Osteo Gel product to retailers in May 2018.

A sample of Voltaren Osteo Gel and Emulgel packaging is below: 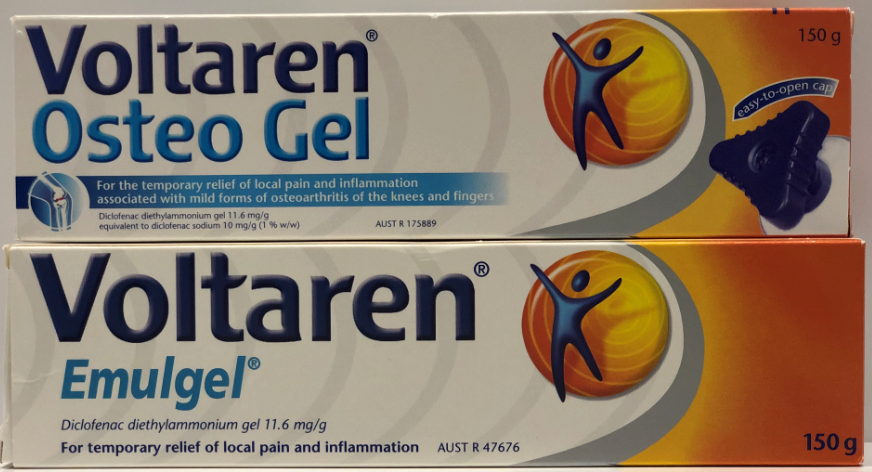 n unrelated proceedings, the Full Federal Court ordered Reckitt Benckiser (Australia) Pty Ltd in December 2016 to pay a penalty of $6 million for making representations that Nurofen Specific Pain products were each formulated to specifically treat a particular type of pain, when this was not the case.