Google allegedly misled consumers on collection and use of location data

The ACCC has instituted proceedings in the Federal Court against Google LLC and Google Australia Pty Ltd (together, Google), alleging they engaged in misleading conduct and made false or misleading representations to consumers about the personal location data Google collects, keeps and uses.

The ACCC claims that from at least January 2017, Google breached the Australian Consumer Law when it made on-screen representations on Android mobile phones and tablets that the ACCC alleges misled consumers about the location data Google collected or used when certain Google Account settings were enabled or disabled.

“We are taking court action against Google because we allege that as a result of these on-screen representations, Google has collected, kept and used highly sensitive and valuable personal information about consumers’ location without them making an informed choice,” ACCC Chair Rod Sims said.

The ACCC’s case regarding the collection of location data focuses on two Google Account settings: one labelled ‘Location History’; and another labelled ‘Web & App Activity’.

The ACCC alleges that from January 2017 until late 2018, it was misleading for Google to not properly disclose to consumers that both settings had to be switched off if consumers didn’t want Google to collect, keep and use their location data.

Instead, the ACCC alleges that when consumers set up a Google Account on their Android phone or tablet, consumers would have incorrectly believed, based on Google’s conduct, that ‘Location History’ was the only Google Account setting that affected whether Google collected, kept or used data about their location.

Similarly, if consumers later accessed their Google Account settings on their Android device, Google did not inform them that by leaving ‘Web & App Activity’ switched on, Google would continue to collect location data.

“Our case is that consumers would have understood as a result of this conduct that by switching off their ‘Location History’ setting, Google would stop collecting their location data, plain and simple,” Mr Sims said.

“We allege that Google misled consumers by staying silent about the fact that another setting also had to be switched off.”

“Many consumers make a conscious decision to turn off settings to stop the collection of their location data, but we allege that Google’s conduct may have prevented consumers from making that choice.”

The ACCC also alleges that from around mid-2018 until late 2018, Google represented to consumers that the only way they could prevent Google from collecting, keeping and using their location data was to stop using certain Google services, including Google Search and Google Maps. However, this could be achieved by switching off both ‘Location History’ and ‘Web & App Activity’.

Use of data representation

The ACCC also alleges that Google’s on-screen statements explaining how location data would be used when customers accessed their ‘Location History’ and ‘Web & App Activity’ settings were misleading.

Google did not disclose that the data may be used by Google for a number of other purposes unrelated to the consumer’s use of Google’s services.

“We consider that because of Google’s failure to disclose this use of data, consumers were and still are deprived of the opportunity to make an informed choice about whether to share their personal location data with Google,” Mr Sims said.

“Transparency and inadequate disclosure issues involving digital platforms and consumer data were a major focus of our Digital Platforms Inquiry, and remain one of the ACCC’s top priorities.”

By making the collection and use of data representations, the ACCC alleges that Google also engaged in conduct liable to mislead the public about the nature, characteristics and suitability for purpose of the Android operating system, Google services and Google Pixel phones.

The ACCC is seeking penalties, declarations and orders requiring the publication of corrective notices and the establishment of a compliance program.

Google LLC is a multinational company incorporated in the United States with its headquarters in Mountain View, California. It is a subsidiary of Alphabet Inc.

Google Australia Pty Ltd is a subsidiary of Google LLC and conducts certain aspects of Google LLC’s business in Australia, including the distribution of Pixel phones.

In addition to its use in providing consumers with Google Services, such as Google Maps, Google also uses location data for advertising purposes, which include:

Google LLC supplies a range of software products and services to Australian consumers, including:

These services are accessed using Google Accounts. Some of them, such as the Google Play Store, can only be accessed if a consumer has signed into a Google Account, while others, such as YouTube, have less functionality if the user has not signed in.

The default setting for new Google Accounts is for “Location History” to be turned “off” (or “paused”) and the “Web & App Activity” setting to be turned “on”.

The ACCC’s Digital Platforms Inquiry final report recommended that privacy legislation be strengthened, including by:

The examples below are hypothetical and outline how the ACCC alleges Google’s conduct may have allowed Google to collect data when “Location History” was switched off.

Google saves data about John’s location in his Google Account even though “Location History” was switched off because leaving on “Web & App activity” allowed Google to save this data through John’s use of Google Maps.

Mary is at a shopping centre in Townsville. She opens the Google Assistant app on her Android phone and uses the voice recognition functionality to ask “Where is the post office?” As part of this activity, Google saves data about Mary’s location in her Google Account even though “Location History” was switched off because leaving on “Web & App activity” allowed Google to save this data through Mary’s use of the Google Assistant service.

The below images show a version of the description of the Location History and Web & App Activity settings shown to consumers setting up a Google Account on their Android mobile device between 30 April 2018 and 19 December 2018: 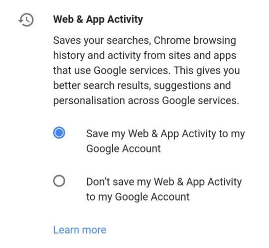 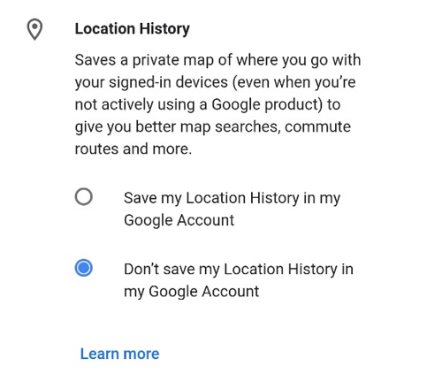 The below image shows a statement shown to consumers who used their Android mobile device to turn off (or “pause”) the Location History setting between early 2017 and late 2018: 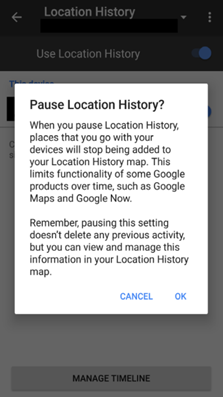 The below images show statements shown to consumers who used their Android mobile device to access the Web & App Activity setting between early 2017 and late 2018: 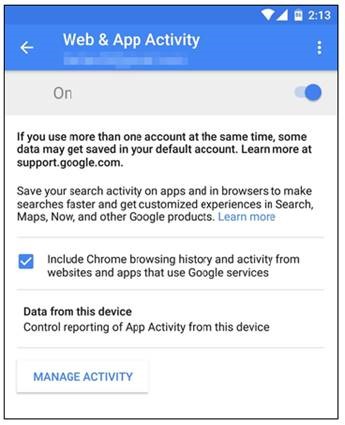 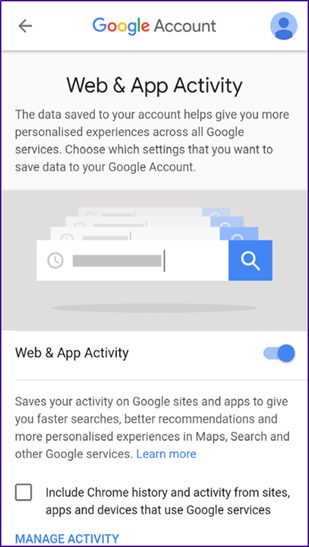 The below image shows a statement shown to consumers who used their Android mobile device to turn off (or “pause”) the Location History setting from late 2018 to date.

The below image shows a statement shown to consumers who accessed the Web & App Activity setting from late 2018 to date: