The domestic gas contract prices offered to commercial and industrial users for supply in 2022 increased from $6-8/GJ in late 2020 to about $7-9.50 by mid-2021, and the supply outlook from 2022 onwards looks increasingly tight, the ACCC’s latest gas report reveals.

Australia’s east coast spot market prices in recent months have been around $10-11/GJ, as domestic gas users have been somewhat shielded from the record high prices seen internationally. European gas markets have been highly volatile, and as of 28 January the outlook for prices on the Asian LNG spot market in 2022 was over $36/GJ on average.

Despite continued high overseas prices, domestic contract offers to commercial and industrial gas users in mid-2021 were below export parity prices. This was likely due to a range of factors, including expectations of relatively stable oil-linked LNG netback prices at the time, short-term domestic market dynamics and concerns over regulatory intervention.

Across the east coast gas market, forecasts are that supply should meet demand this year, but there is the risk of a shortfall from 2026. In the southern states, a shortfall of 10 PJ is expected this year and gas will need to be directed from the north to meet demand.

Continued write-downs of proved and probable (2P) reserves, predominantly by LNG producers in Queensland, has contributed to this forecast shortfall.

“There is a gas shortage forecast for Australia’s southern states from as soon as this year, which is likely to continue next year and beyond. Southern states will be reliant on gas from Queensland until additional supply from new sources comes on,” ACCC Chair Rod Sims said.

The report shows that LNG producers are forecasting to take more gas out of the market in 2022 than they expect to supply in. However, they forecast to produce an additional 122 PJ of gas that could be supplied into the domestic east coast gas market, rather than international LNG spot markets.

“We’re extremely concerned that LNG producers are currently forecasting to withdraw 27 PJ more gas than they expect to supply into the domestic market this year,” Mr Sims said.

“The uncertain supply situation reinforces the importance of the Australian Government's Heads of Agreement with LNG producers, which concludes on 1 January 2023.”

The Heads of Agreement requires LNG exporters to offer uncontracted gas to the domestic market on internationally competitive terms before it is exported, and to provide relevant material to the ACCC to demonstrate they are complying with the agreement.

“Compliance with the Heads of Agreement by LNG producers is very important, given that Australia’s southern states may depend on their surplus gas in the coming years. LNG producers’ reporting to the ACCC has improved since the July 2021 report, but they can still do more to comply with the Heads of Agreement and make gas available on reasonable terms that users are capable of accepting,” Mr Sims said.

The ACCC also recommends that the Australian Government consider extending the Heads of Agreement well before it expires on 1 January 2023.

“Additional supply from a southern LNG import terminal from 2023, or more domestic supply from the north, may not be enough to address the projected shortfalls, and it may still be necessary to divert excess gas into the domestic market that would otherwise be exported if new supply can’t be developed rapidly enough,” Mr Sims said.

The report also makes findings from the first stage of the ACCC’s examination of competition in markets for the exploration, production and processing of gas for the east coast, including the factors affecting when gas is brought to market.

“The timing of the development of uncontracted reserves is critical for the domestic market but these decisions are largely in the hands of a relatively small number of major gas producers,” Mr Sims said.

“Our review suggests that there are a range of infrastructure, regulatory and capital factors impeding upstream competition and limiting gas supply.”

To address these issues, the ACCC recommends governments implement a range of reforms to encourage greater diversity of suppliers and reduce the barriers faced by producers. Upstream competition could be improved if owners of existing infrastructure such as processing and storage facilities provided third party access to this infrastructure on reasonable terms.

The ACCC will report on findings from the second stage of its review of competition in markets for the exploration, production and processing of gas, in 2022. This will focus on the behavioural factors that may be impeding upstream competition.

The ACCC notes that gas suppliers and large gas users recently agreed to a voluntary industry code of conduct for negotiating and developing gas supply agreements. The ACCC will monitor the implementation and operation of the code as part of its gas inquiry.

“The voluntary code is a step in the right direction, and we encourage all gas suppliers to sign up to it. The more signatories there are, the greater the benefits will be for commercial and industrial gas users,” Mr Sims said. 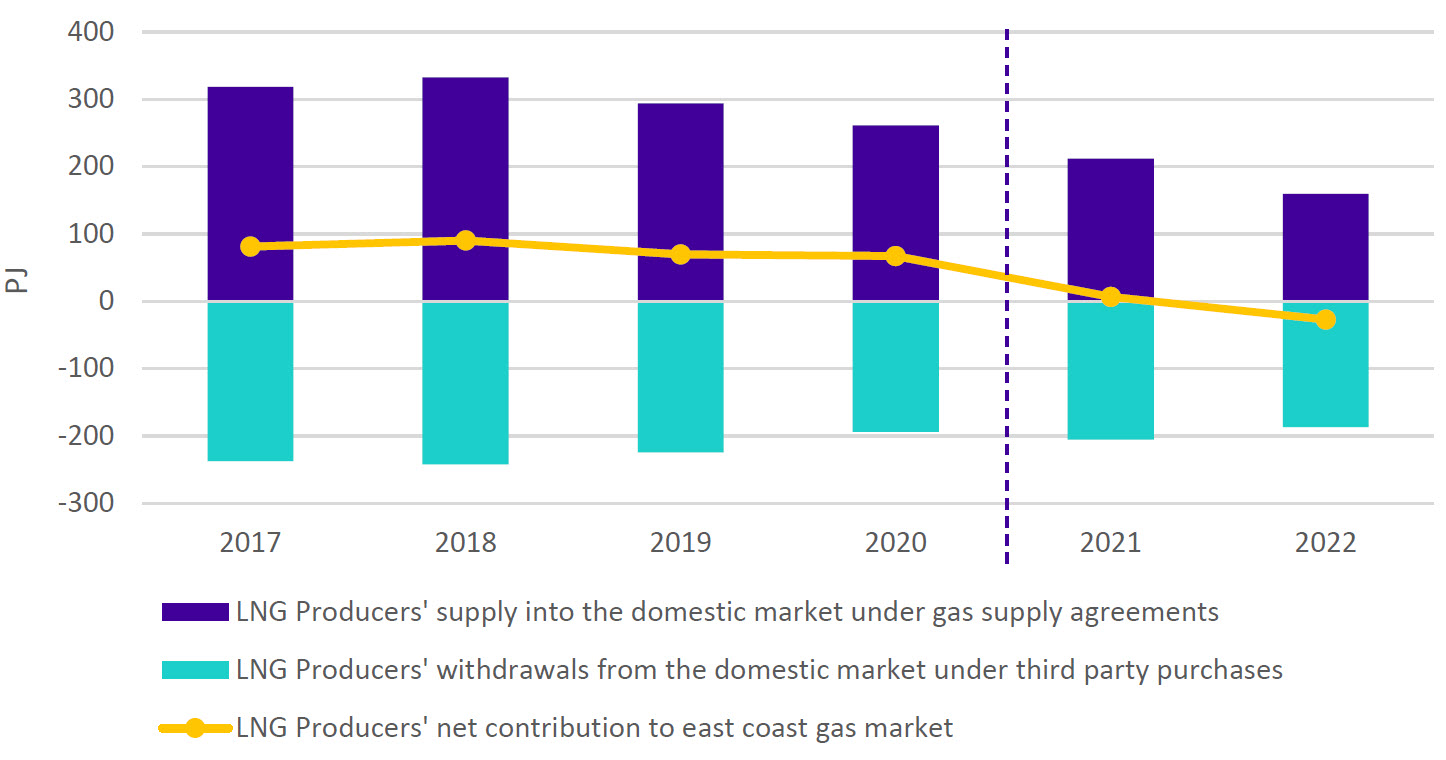 The short and long term supply outlooks in the January 2022 interim report were based on information obtained from producers in August 2021. After the report was finalised, the ACCC was provided with revised production forecasts for the 2022 to 2033 period. The revised forecasts are not reflected in the report but the impact of them is that:

On 19 April 2017, the Australian Government directed the ACCC to conduct an inquiry into the supply of and demand for wholesale gas in Australia and publish regular information on the supply and pricing of gas for three years. On 25 July 2019, this inquiry was extended until December 2025.

On 21 January 2021, the Australian Government announced a new Heads of Agreement had been signed which commits LNG exporters to offer uncontracted gas to the domestic market first on internationally competitive market terms before it is exported. The new Heads of Agreement was entered into in late December 2020 and operates over 2021–23.

On 30 November 2021, gas suppliers and gas users agreed to a voluntary industry Code of Conduct for the negotiation and development of Gas Supply Agreements. The code will commence on 1 June 2022 and will be reviewed 12 months after.