Don’t swipe right on a scammer this Valentine’s Day

Scamwatch is urging tech-savvy daters to be on the lookout for romance scammers this Valentine’s Day as data shows these scams are increasingly happening through social media and dating apps.

“Scammers tend to go where people are, and in the dating world that increasingly means on social media and dating apps,” ACCC Deputy Chair Delia Rickard said.

Women are particularly at risk to losing money to romance scams with Scamwatch data showing they are four times more likely to report losing money compared to men.

Social media is the most common contact method used by scammers to engage their victims. However Scamwatch is seeing increasing reports of romance scammers using mobile apps like Tinder, Facebook Messenger and Viber. Losses reported where the scammer and victim met on an app have increased more than 300 per cent in the past two years.

The scam can continue for years and Scamwatch receives many heart breaking stories about the financial and emotional toll they take.

“Finding potential new love is exhilarating but that can make it easy to miss the red flags that point to you falling for a scammer,” Ms Rickard said.

“Be careful if someone you don’t know makes contact on social media and presents themselves as a ‘too good to be true’ catch. It’s likely they’ve done some research on you beforehand to find out things about you to create an instant bond.”

“On apps, it can be trickier as the whole point is meeting new people. However, nearly all romance scammers will eventually reveal their intentions, which is getting your money. If you’ve only ever known the person online or through an app, don’t give them money. You may think you love them and want to help, but they’ll just break your heart, and deplete your bank account,” Ms Rickard said.

“It can pay to trust your head over your heart. If you have any doubts about someone you have met online or through an app, doing a Google search on their name and pictures can often reveal scammers. Go to Scamwatch.gov.au to learn more about how you can tell if a romance scammer has you in their sights.”

For more advice on how to avoid dating and romance scams, visit Scamwatch. People can also follow @scamwatch_gov on Twitter and subscribe to Scamwatch radar alerts. 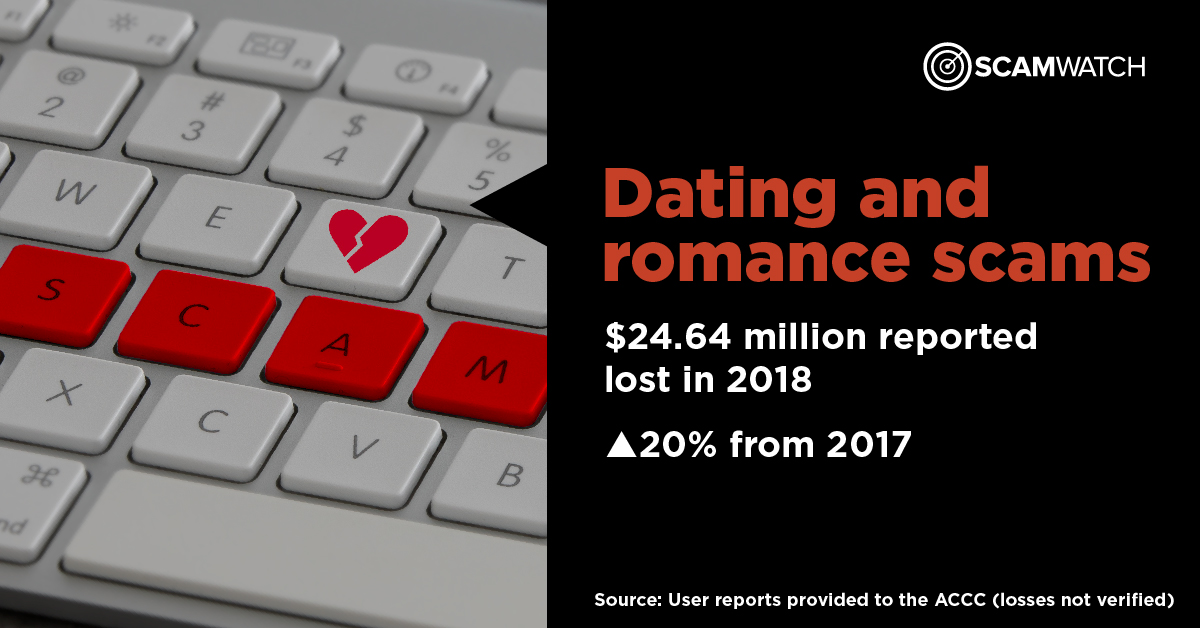