Domestic gas users paying too much

While this was down slightly from the $9 to $12/GJ range observed earlier in 2019, this price decline was not in line with the significant and sustained drop in LNG netback prices, which were for 2021 delivery below $6/GJ by early 2020 and have been below $5.50 since May.

“The ACCC is very concerned with the widening gap between domestic and export parity prices, which will have an inevitable impact on Australia’s industrial sector during what is already a difficult economic period,” ACCC Chair Rod Sims said.

“Queensland LNG producers sold 18 LNG spot cargoes into international markets in late 2019 and early 2020, equivalent to more than 10 per cent of annual domestic east coast demand. This gas was sold at prices substantially below domestic gas price offers, showing the importance of our continuing work to understand the drivers behind the price levels we are seeing across the domestic market.”

“It is also clear that recent Australian contract gas prices do not reflect overseas forward prices.”

“I am yet to hear a compelling reason from LNG producers as to why domestic users are paying substantially higher prices than buyers in international markets.”

“When we have lower gas prices around the world, and the Australian market linked to world gas markets, it is vital that Australian gas users get the benefit.”

The ACCC recommends the extension of the existing Commonwealth Government’s Heads of Agreement with LNG producers, due to expire at the end of 2020, because of the demonstrated capacity of LNG producers to supply additional gas into the domestic market when needed.

“As well as extending this Heads of Agreement, we think the government should consider strengthening the agreement’s price commitments,” Mr Sims said.

“For example, reference could be made to LNG netback price expectations and the prices LNG exporters could expect to receive for uncontracted gas in overseas markets over the relevant period.”

“Extending the Heads of Agreement is one measure that can be adopted now. Further measures are also needed to ensure adequate supply of appropriately priced gas over the longer term,” Mr Sims said.

With the southern states facing the greatest risk of shortfall in the future, the ability of market participants to transport gas from Queensland into southern markets remains critical.

The ACCC also recommends that governments seek to increase the diversity of suppliers when granting new tenements, as greater competition between suppliers would be more likely to bring down domestic prices. Measures such as active tenement management should also be used to ensure producers bring gas to market in a timely manner.

Australia’s east coast gas market is expected to have sufficient supply in 2021, with the LNG producers in particular having surplus gas, but the risk of a shortfall in the southern states in the medium term has increased, the ACCC’s report finds.

“The impacts of COVID-19 and the collapse in oil prices are being felt at all levels of the gas supply chain, and they have highlighted key areas of dysfunction in the market,” Mr Sims said.

“The cumulative effect on gas users is significant and exacerbates the difficulties being experienced by many commercial and industrial users.”

The report is available at Gas Inquiry

An ‘LNG netback price’ is a measure of an export parity price that a gas supplier would expect to receive for exports. It is calculated by taking the price that could be received for a quantity of LNG and subtracting or ‘netting back’ the costs incurred by the supplier to convert the gas to LNG and ship it to the point of delivery.

LNG netback prices are a key factor influencing domestic gas prices. The ACCC publishes the LNG netback price series on its website fortnightly. Improved transparency on LNG netback pricing assists in reducing the information imbalance between gas users and suppliers, and improve the competitiveness of the bargaining process.

The gas prices mentioned in this media release and in the ACCC’s Gas Inquiry 2017–25 Interim Report – July 2020 (unless otherwise stated) are ‘gas commodity prices’. These prices do not include any separate charges, such as applicable transportation or other additional charges that may be passed through to gas buyers.

2P (proved and probable) reserves are commercially recoverable reserves with at least a 50 per cent probability that the quantities recovered will equal or exceed the estimated quantity.

The chart below shows the increasing divergence between expected LNG netback prices and average Queensland producer offers between February 2019 and February 2020. 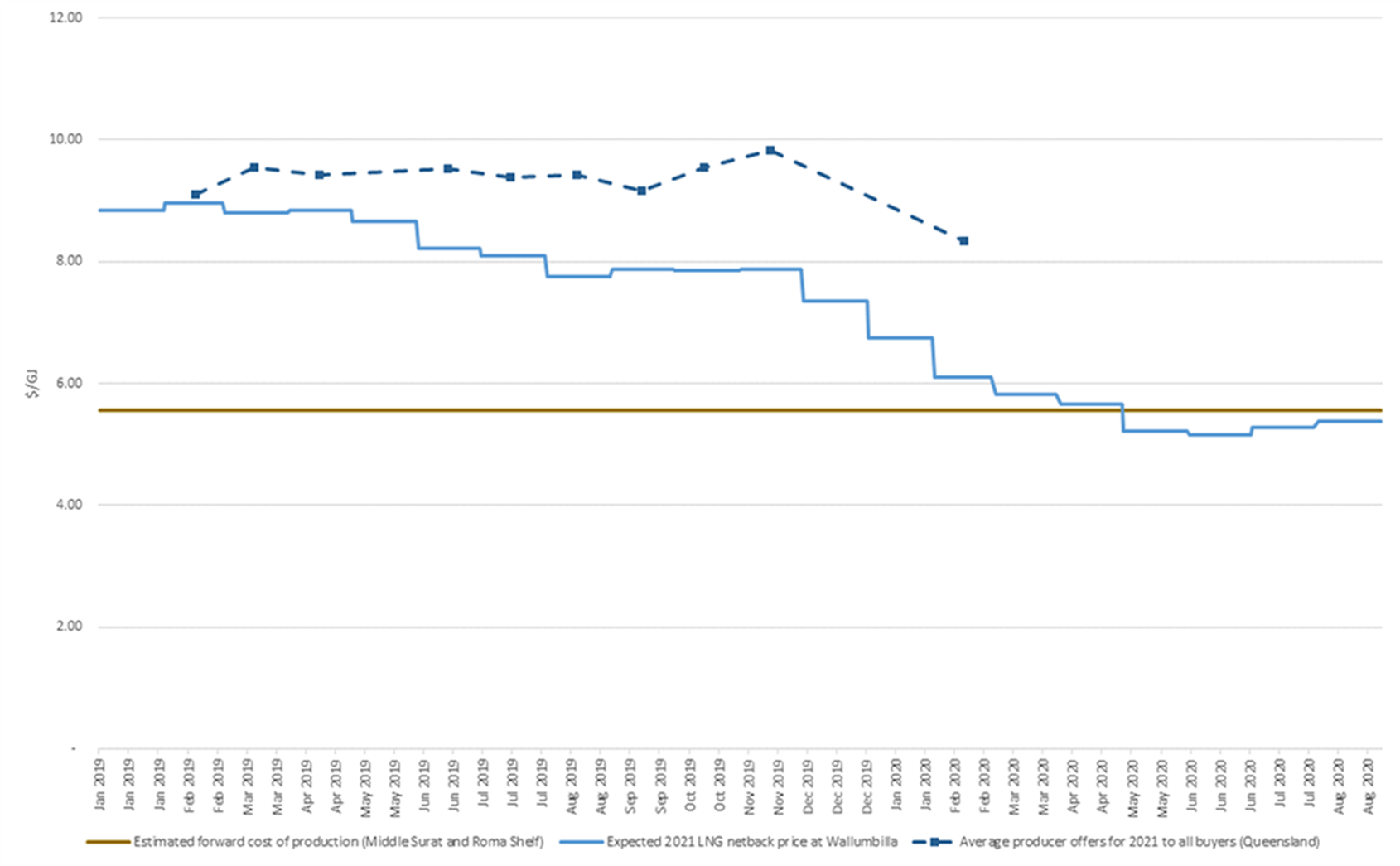 On 19 April 2017, the Australian Government directed the ACCC to conduct an inquiry into the supply of and demand for wholesale gas in Australia, and publish regular information on the supply and pricing of gas for three years. On 25 July 2019, this inquiry was extended until December 2025.

In October 2017, the Australian Government entered into a Heads of Agreement with the LNG producers. Under the Heads of Agreement, LNG producers committed to offer sufficient gas to the domestic market to meet expected shortfalls in 2018 and 2019, and to offer uncontracted gas on ‘competitive market terms’ before offering it to the international market.

In September 2018, the Heads of Agreement was renewed and extended to cover the 2020 calendar year.