The Australian Competition and Consumer Commission has today published its annual reports on prices and competition in the telecommunications sector.

“These reports show that many of the significant structural changes transforming the sector in 2015-16 are being driven by consumer demand,” ACCC Chairman Rod Sims said.

Prices for telecommunications services, which includes internet, mobile and fixed line services, have fallen overall by 1.5 per cent. Within this, prices for internet services increased by 2.7 per cent on average but this was accompanied by growing data allowances in many plans

“While some consumers may be paying more, they are also getting much more in terms of data allowances. Consumer demand for streaming services, cloud services, and increasingly content rich websites and social media applications is driving this growth in data consumption.”

“The rapid evolution of the sector is delivering access to higher quality communications networks and a greater range of services for consumers,” Mr Sims said.

“Tellingly, retailers provide around four times the network capacity for each consumer on their NBN services than on Telstra’s ADSL network, enabling a better online experience for the more than forty percent of consumers watching television over their broadband connection, or accessing other data intensive applications.”

The reports also find that competition is proving resilient to industry consolidation and the transition to new cost structures. Retail market shares have remained stable, while wholesale shares have moved as competitive carriers migrate services to the NBN and mobile virtual network operators swap over to other mobile networks.

The telecommunications sector will be a key focus of the ACCC 2017.

The ACCC is currently working with industry and government to improve broadband speed claims (link), is undertaking a declaration inquiry into mobile roaming (link) and a market study which will examine existing or emerging competition and consumer issues in the sector (link). 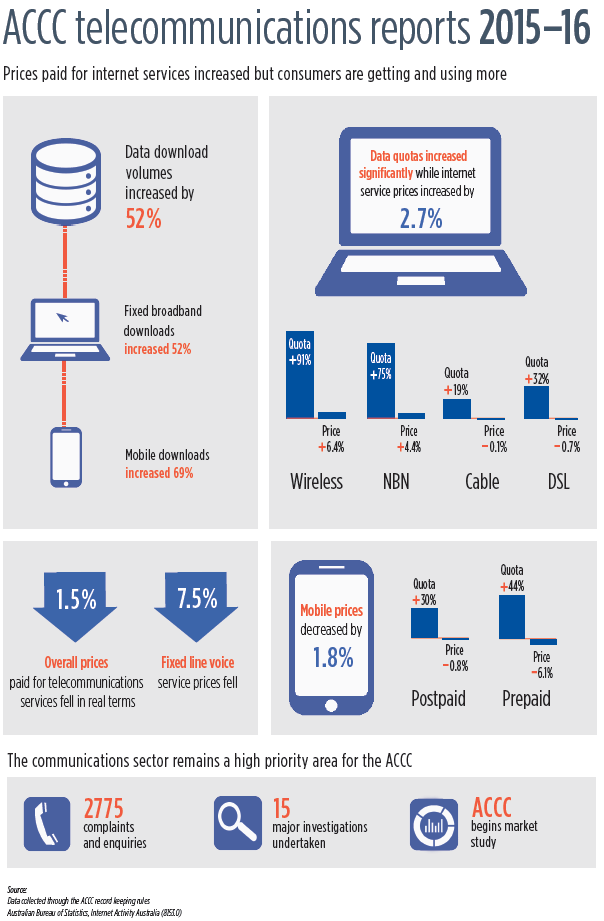