The Australian Competition and Consumer Commission is warning suppliers and installers of degrading Infinity cables, including DIY homeowners, to take action before months of hot weather could cause the cables to become  brittle and put lives at risk.  Property owners are also being urged to take action to avoid serious risks.

Testing has revealed that Infinity cables could become defective by the end of this summer in New South Wales, where they were first installed in 2010. If the cables are disturbed and break, it could result in very serious consequences such as death or serious injury from electrocution or a fire. Olsent power cables sourced from Infinity Cable Co Pty Ltd and solely supplied by Masters Home Improvement are also affected. 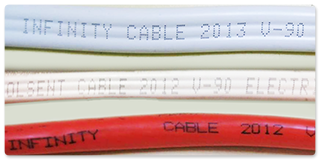 “At least 2,408 kilometres of unsafe Infinity cable has not yet been located or remediated in homes across Australia, and only 35 kilometres have been fixed since our last update in October. With only a few months until the cable could degrade to a point where it becomes brittle, the slow progress is extremely concerning due to the serious safety risk,” ACCC Deputy Chair Delia Rickard said.

"We strongly urge homeowners who have had electrical cabling installed since 2010 in NSW and since 2011 elsewhere in Australia to make time this summer to book an inspection, to address this potentially serious safety risk. For as little as $100, an electrician will inspect your home and if Infinity cables are discovered, the cost of the inspection will be covered by the cable supplier along with the full cost of remediation.”

“Some of the cable is suspected to have been installed by DIY householders. If you have installed electrical cable yourself since 2010 in NSW or 2011 in other States, do not attempt to fix it yourself.  Notify the retailer you bought it from and organise a licensed electrician to carry out the work," Ms Rickard said.

“In some circumstances, suppliers, installers and property owners may be liable for any personal injury or property damage caused by Infinity cable installed in buildings,” Ms Rickard said.

“Suppliers and installers who are not actively notifying customers of the risk also potentially expose themselves to regulatory action.”

The ACCC has been working with retailers who supplied Infinity cable to warn the public of the safety risks of this product, and to offer a remediation program. Electricians also have an obligation to inform property owners and businesses that cable they installed may be non-compliant and, if so, requires remediation.

Property owners who are aware that their property contains Infinity cable are under a duty to take reasonable care to avoid a foreseeable risk of harm and would likely be liable for personal injury and damage that occurs if they refuse remediation.  In addition, a sale or lease of the property without disclosing this information to the purchaser or tenant may amount to misleading or deceptive conduct, in breach of the Australian Consumer Law.

* Remediated is replaced, rendered safe under the recall, or returned to stores.

**Cable remediated or recovered for unspecified states/territories has been deducted from total KM outstanding, as has cable scheduled for future remediation.