A mandatory code of conduct should be considered for the Australian dairy industry to address problems caused by bargaining power imbalances between processors and farmers, according to recommendations made by the ACCC in its interim report from its inquiry into the industry, published today.

The ACCC’s report follows a 12-month inquiry into the Australian dairy industry. It involved the most comprehensive analysis of the sector for decades, utilising strong information gathering powers conferred on the ACCC by the Australian Government. 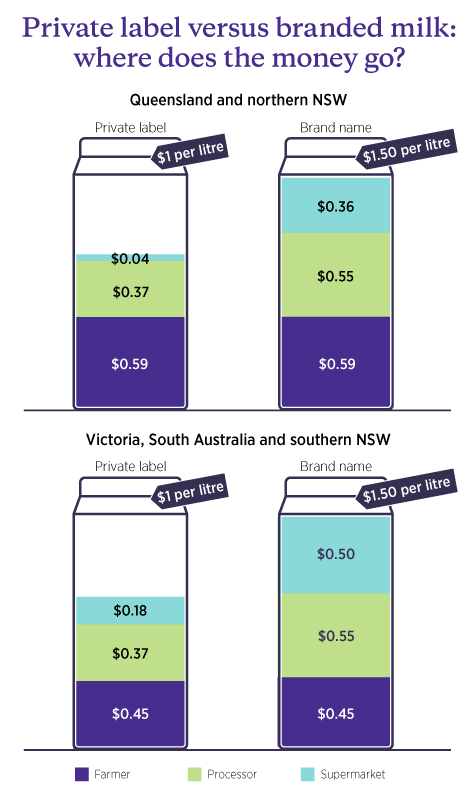 “What’s clear is that processors, often under pressure from supermarkets or export market competition, use their relative bargaining power to shift risks onto dairy farmers. The power imbalance is evident in the nature of contracts between the processors and farmers. These involve uncertain pricing information and contract terms which deter switching,” ACCC Commissioner Mick Keogh said.

The need for reform has been recognised by processors, many of whom have supported the recently developed voluntary code. However, the ACCC says while the voluntary code has improved contract terms in milk supply agreements, it doesn’t go far enough.

“There’s been some improvements following the introduction of the voluntary code but, in the ACCC’s view, it is unlikely to fully address the issues that cause detriment in the industry in the longer term. The voluntary code is not enforceable and processors can choose to not participate or not comply, and there are no negative consequences,” Mr Keogh said.

The ACCC also analysed the impact of $1 per litre private label milk on earnings through the dairy supply chain.

The decision by supermarkets to sell private label milk for $1 per litre is a source of great annoyance for many dairy farmers, who believe this price denigrates all the effort they put into producing milk.

“However, the ACCC found that farmers earn the same regardless of whether their milk ends up as private label, or more expensive branded milk. Farm gate prices are quarantined from other costs which affect the prices paid by supermarkets and the margins earned by processors.

“We don’t think that an increase in the retail price of private label milk would necessarily benefit farmers, and that any additional profit would mainly be captured by the major supermarkets and processors,” Mr Keogh said.

The ACCC has found the major supermarkets have leveraged their buying power to lower wholesale processing costs and capture profits from processors. While the supermarkets have kept some of the resulting profits, they have mostly transferred the benefits of these wholesale cost savings to consumers.

Strengthening the bargaining power of farmers, and limiting the extent to which processors can simply transfer risk onto them, appears the best way to address bargaining power imbalances and ensure the events of April 2016 are not repeated.

The ACCC’s report makes eight recommendations arising from its analysis of the industry to date. The ACCC is seeking feedback in the interim report by 31 January 2018 before releasing a final report in April 2018. Further information is available at: Dairy inquiry

On 27 October 2016, the Treasurer issued a notice requiring the ACCC to hold an Inquiry into the competitiveness of prices, trading practices and the supply chain in the Australian dairy industry. The Inquiry formally commenced on 1 November 2016 for a 12 month period.

Separate to the Inquiry, in April 2017 the ACCC instituted proceedings against Murray Goulburn in relation to the cuts to the price paid to dairy farmers for milk solids, which were announced in April and May 2016.