Cost of supplying electricity to households at an eight-year low

Cheaper wholesale prices have reduced the cost of supplying electricity to households to the lowest it has been in eight years, and retailers have started to pass on the savings to consumers, the ACCC’s latest electricity market report reveals.

Cost of supplying electricity to households at an eight-year low 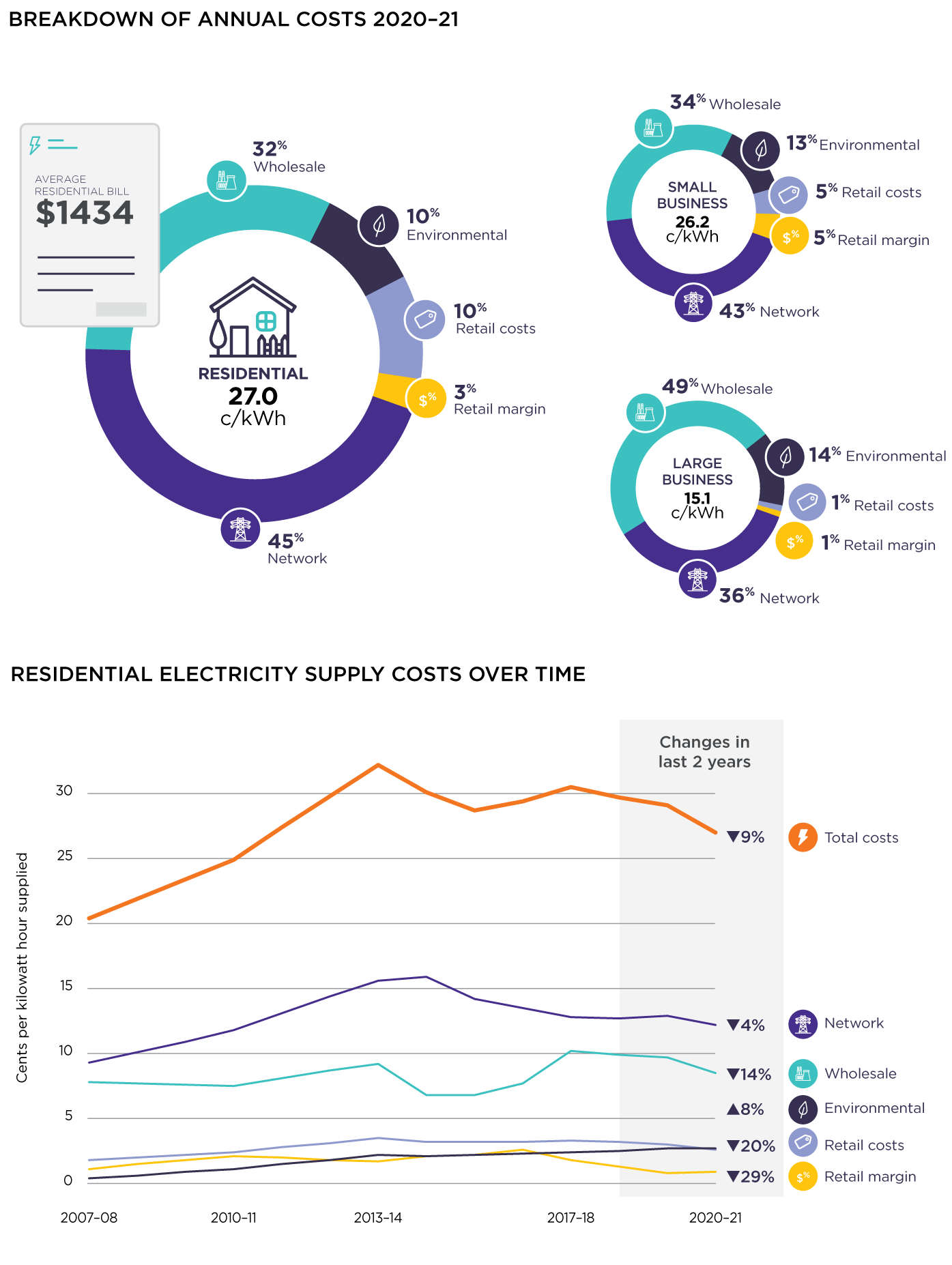 The report lays out the various costs that retailers incurred in supplying electricity to customers in the National Electricity Market states of New South Wales (including ACT), Victoria, South-East Queensland, South Australia and Tasmania in 2019-20 and 2020-21.

“Our analysis of retailers’ cost data is valuable because it not only shows us what makes up the total figure on an electricity bill, it reveals whether they pass on cost reductions to consumers,” ACCC Chair Rod Sims said.

The report shows that the annual cost for a retailer to supply electricity to an average residential customer in the National Electricity Market in 2020-21 was $1,434, which is $128, or eight per cent, less than it was in 2018-19.

But despite these recent reductions, inflation-adjusted (real) electricity costs are still 32 per cent higher than they were in 2007-08, which is the earliest year the ACCC has data for.

“More renewable generation and lower fuel costs have brought down the wholesale price of electricity, and the Prohibiting Energy Market Misconduct laws are working because we can see the savings being passed down from generators, to retailers, to consumers,” Mr Sims said.

“There is a time delay between wholesale prices falling and electricity bills declining due to the hedging contracts between generators and retailers. But we know there are more savings still to be passed on to consumers and businesses because we haven’t yet seen the lower prices in the wholesale market for electricity fully reflected in retailers’ costs.”

“Electricity prices are on a downward trend, but we want industry and governments to continue working on this because prices are still much higher than they were just over a decade ago,” Mr Sims said.

Components that make up an electricity bill

Of the $128 average saving for a residential customer over the last two financial years, $66, or more than half, came from falls in wholesale electricity costs. Wholesale spot market prices were driven down by more solar and wind generation, cheaper coal, and on the demand side, mild weather and increased household solar generation.

Reductions in network costs accounted for a $22 saving out of the total $128, and lower retail costs and margins made up a further $52 per household average saving compared to 2018-19.

Retail margins in 2019-20 were the lowest the ACCC has observed, although they increased slightly the following year.

“Retail margins may have shrunk because of the Default Market Offer and Victorian Default Offer reforms introduced in 2019, which reduced and capped prices for customers on more expensive standing offers,” Mr Sims said.

The only one of the five cost components to increase in the last two financial years was what retailers paid to comply with environmental programs, such as the national small-scale renewable energy scheme, and state-based premium feed-in tariff schemes. Environmental costs rose by an average of $12 per customer in 2019-20 and 2020-21, which is in keeping with the multi-year trend of gradual increases. 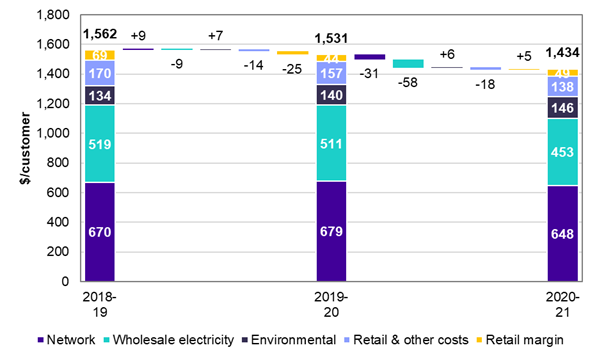 Source: ACCC analysis based on retailers’ data. Numbers may not sum due to rounding.

Cheaper wholesale prices have reduced the total cost of supplying electricity to small businesses to the lowest it has been in five years. For large businesses, costs are the cheapest in four years.

Significantly, the margins that retailers charge for supplying electricity to small business customers fell by 41 per cent between 2018-19 and 2020-21, after being persistently high for many years.

“We expect to see electricity prices for small business customers come down further, which will provide relief to many in their pandemic recovery,” Mr Sims said.

Passing on savings to consumers

The ACCC enforces the Prohibiting Energy Market Misconduct laws, that came into force in June 2020. The laws require electricity retailers to pass on significant and sustained cost reductions to customers.

“We anticipate that retailers’ wholesale electricity costs will continue to fall as older and more expensive hedging contracts expire. This should mean continued reductions in electricity prices for customers next year,” Mr Sims said.

The ACCC has approached a number of electricity retailers who may not have adequately passed on cost savings to their customers and will continue to closely monitor and investigate the behaviour of retailers in the electricity market.

This report presents analysis on retailers’ costs in supplying electricity to customers in 2019-20 and 2020-21.

The ACCC’s accumulated dataset on retailers’ costs comes from 15 electricity retailers that together supply the vast majority of customers across the National Electricity Market. This work complements the ACCC’s parallel reporting on, and dataset for, electricity bills issued to customers.

Western Australia and the Northern Territory are not connected to the National Electricity Market, and regional Queensland is not included in this report as most customers there are on regulated offers.

In August 2018, the then Treasurer, the Hon Scott Morrison MP, directed the ACCC to hold an inquiry into the prices, profits and margins in relation to the supply of electricity in the NEM. This is the sixth time the ACCC has reported as part of this inquiry.

The report is available on the ACCC’s website at Electricity market monitoring 2018-2025.

The ACCC is required to report at least every six months. The next report is scheduled for May 2022.