Consumers urged to fight back against record retailers' margins

Average petrol prices in Australia’s five largest cities increased significantly in the December 2017 quarter and hit their highest levels since 2015, according to the ACCC’s latest quarterly petrol report.

The ACCC found that average petrol prices in Sydney, Melbourne, Brisbane, Adelaide and Perth increased by 12.6 cents per litre in the quarter to 135.1 cents per litre.

“Motorists can fight back against these high prices by using fuel price websites and apps to shop around. Consumers can save significantly by timing their purchases during the price cycle, which encourages retailers to be more competitive,” ACCC Chairman Rod Sims said.

Three factors contributed to the high retail prices in the quarter. Higher international crude oil and refined petrol prices and a lower AUD-USD exchange rate contributed around two-thirds of the increase in retail prices. The rest was due to high gross retail margins.

Gross retail margins, on both a quarterly and annual basis, are the highest recorded since the ACCC began monitoring them in 2002.

“Petrol retailers’ margins are the highest they have ever been and motorists are paying for it. Last quarter alone, average gross retail margins in the five largest cities were 14.2 cents per litre, an increase of 3.9 cents per litre from the previous quarter,” Mr Sims said.

Annual average gross retail margins in calendar year 2017 were more than 4 cents per litre higher than the average margin over the past 15 years, which was 8 cents per litre. Assuming similar margins for sales of all petrol types across Australia, this represents an additional cost to motorists of over $750 million per year.

“The ACCC accepts that some of the increase in gross retails margins has been due to increased costs; the information we have, however, indicates that this contribution does not explain the bulk of the increase,” Mr Sims said.

The ACCC’s role in monitoring petrol prices was extended by the Treasurer in December 2017. This monitoring role largely exists so that the ACCC can assist consumers navigate this complex and fluctuating market. The ACCC does not have the power to set prices or margins.

The price of Brent crude oil, the most widely used international crude oil price benchmark, reached its highest level in over two and a half years in the December quarter 2017. This was influenced by increased demand, and by crude oil production cuts announced by the OPEC cartel and other oil producers in late 2016. In the December quarter, these producers committed to extend the production cuts to the end of 2018. The increase in crude oil prices led to increases in international refined petrol prices.

Brisbane retail petrol prices remain the highest among the five largest cities. The ACCC released its report into the Brisbane petrol market on 9 October 2017, which found that retailers in Brisbane achieved higher margins and profits due to weak retail competition.

“Over the eight years, Brisbane prices have been on average 3.3 cents per litre higher than prices in the other large cities,” Mr Sims noted.

The report examined developments in the four regional markets that the ACCC has studied in-depth in recent years (Darwin, Launceston, Armidale and Cairns). In Launceston and Cairns, retail prices were significantly above a long-term competitive cost-based price in the December quarter 2017, while prices in Armidale and Darwin were moderately and marginally above the long-term competitive cost-based price respectively.

Darwin retail petrol prices increased significantly between October and December 2017, and by much more than the increase in wholesale prices.

“The high petrol prices in Darwin will be frustrating to motorists there,” Mr Sims said.

”It’s positive that the NT Government launched the MyFuel NT website and app in November last year. I encourage Darwin motorists to use the service to shop around and buy their petrol at the lower priced retailers, such as FuelXpress and United, rather than at high priced retailers such as Coles Express.”

“Rewarding retailers that offer the lowest prices will save motorists money. It can also encourage stronger competition and should lead to cheaper prices at the pump for motorists,” Mr Sims said.

Mr Sims also welcomed the launch by the NSW Government of the FuelCheck app in October 2017, which he said encourages pricing transparency and empowers consumers.

The new FuelCheck app and the MyFuel NT app and website join existing fuel price transparency schemes, including the MotorMouth website and app, apps operated by GasBuddy, the NRMA, 7-Eleven and Woolworths, and the WA FuelWatch and NSW FuelCheck websites.

The chart below highlights the growth in annual retail margins since the ACCC began tracking them in 2003:

Annual average GIRDs in the five largest cities in real terms: 2003 to 2017 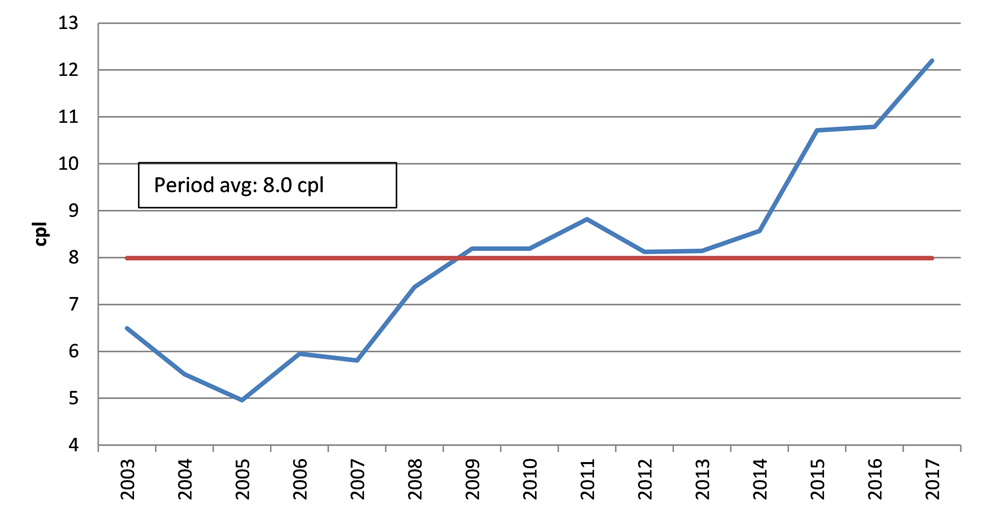 On 20 December 2017, the Treasurer issued a new direction to the ACCC to monitor the prices, costs and profits relating to the supply of petroleum products and related services in the petroleum industry in Australia.

As part of this new direction, the ACCC will produce quarterly reports on movements in retail prices and margins, as well as industry reports on topics of consumer interest over the next two years. Today’s report was the first one issued under the new direction.

Gross retail margins are the difference between average retail prices and average wholesale prices. They include operating costs, such as branding, transportation, labour and compliance costs. Therefore, gross retail margins should not be confused with actual retail profits.

The source for the chart is ACCC calculations based on data from the companies monitored by the ACCC, FUELtrac, Informed Sources, WA FuelWatch and Australian Bureau of Statistics. The base year is 2017.