Consumers have more options to shop around for petrol

New data released today shows Australians have more choice than ever before when buying petrol. Consumers are encouraged to take advantage of this increased choice by shopping around to maximise the benefits of offerings like cheaper fuel, loyalty programs, convenience store items and even in-store cafes.

The ACCC’s second petrol industry report examines retail market shares in Australia and shows there is a greater diversity of retailers in the market compared with 15 years ago when it was dominated by big brands like BP and Caltex.

Refiner-wholesalers, brands such as BP and Caltex that refine and wholesale petrol as well as selling it at the retail level, accounted for an overwhelming 83 per cent of ACCC monitored retail petrol sales in 2002-03.

Since then, their share of ACCC monitored retail petrol sales has declined significantly to 38 per cent in 2016-17.

Conversely, large independent retail chains (7-Eleven, United, Puma Energy and On The Run) more than quadrupled their market share over that time, rising from 6 per cent of ACCC monitored retail petrol sales in 2002-03 to 25 per cent in 2016-17.

“The changing dynamic of Australia’s retail petrol market can be beneficial to consumers, as it gives them more choice about where they get their fuel,” ACCC Chair Rod Sims said.

“New retailers entering the market, for example, can have a positive impact on competition as businesses fight for market share. This can help bring down prices, as we have recently seen in the Cairns petrol market. Where there are a limited number of retailers in a market, prices can be higher due to a lack of price competition,” Mr Sims said.

The report also found that the market shares of the two supermarket chains (Coles Express and Woolworths) had diminished over the past four years. Their combined share of ACCC monitored petrol volume sold grew strongly between 2002-03 and 2012-13 to 51 per cent of ACCC monitored petrol sales, in part due to shopper docket discounts that at times reached as high as 45 cents per litre.

The ACCC undertook an investigation into these shopper dockets and in December 2013 accepted voluntary court-enforceable undertakings from Coles Express and Woolworths to limit these discounts due to concerns about their long-term anti-competitive effect.

These limits to shopper docket discounts, as well as changes to the supermarkets’ business arrangements, have contributed to their decline in market share since 2012-13.

“For example, in our first industry report we found that in Sydney the difference between the highest priced and lowest priced retailer was 9.5 cents per litre in 2017. Price-sensitive consumers can therefore make significant savings over time by choosing to buy petrol at lower priced retailers.”

The Queensland Government is planning to commence a two-year trial in December that requires fuel retailers to collate and publish their latest prices online.

Some consumers may prefer to purchase petrol from retailers they consider to be in convenient locations, have superior convenience store offerings or offer loyalty schemes, such as frequent flyer points. These consumers can still benefit from having a wider range of retailing operations to choose from, as retailers are likely to try to compete on non-fuel offerings to attract these consumers.

While the national petrol retailing market has become more balanced over time, this is not necessarily true for all locations. Each location will have its own specific retailers, and their share of the retail market will often be different from the national market share.

The report also examined market shares at the wholesale sector of the petrol industry. Refiner-wholesalers account for the majority of wholesale petrol sales in Australia, although their share of sales has decreased marginally over time.

The report is available at: Retail & wholesale petrol market shares in Australia.

On 20 December 2017, the then Treasurer issued a new direction to the ACCC to monitor the prices, costs and profits relating to the supply of petroleum products and related services. The direction, issued under section 95ZE of the Competition and Consumer Act 2010 (Cth), took effect from that date and lasts for two years.

Under the direction, the ACCC produces quarterly petrol monitoring reports focusing on price movements in the capital cities and over 190 regional locations across Australia. It also produces industry reports that focus on particular aspects of consumer interest in the fuel market. This is the second industry report under the new direction.

As part of its role in monitoring the petroleum industry, the ACCC collects sales volume data from Australia’s largest petrol retailers and wholesalers. Companies that are currently monitored by the ACCC in these sectors are: BP, Caltex, Mobil, Viva Energy/Shell, Coles Express, Woolworths, 7-Eleven, Liberty, United, Puma Energy and On The Run.

The chart below shows the share of ACCC monitored retail petrol sales volumes  by major retailer category between 2002-03 and 2016-17. These categories are: refiner-wholesalers (BP, Caltex, Mobil and Viva Energy/Shell); supermarkets (Coles Express and Woolworths) and large independent retail chains (7-Eleven, United, Puma Energy and On The Run). 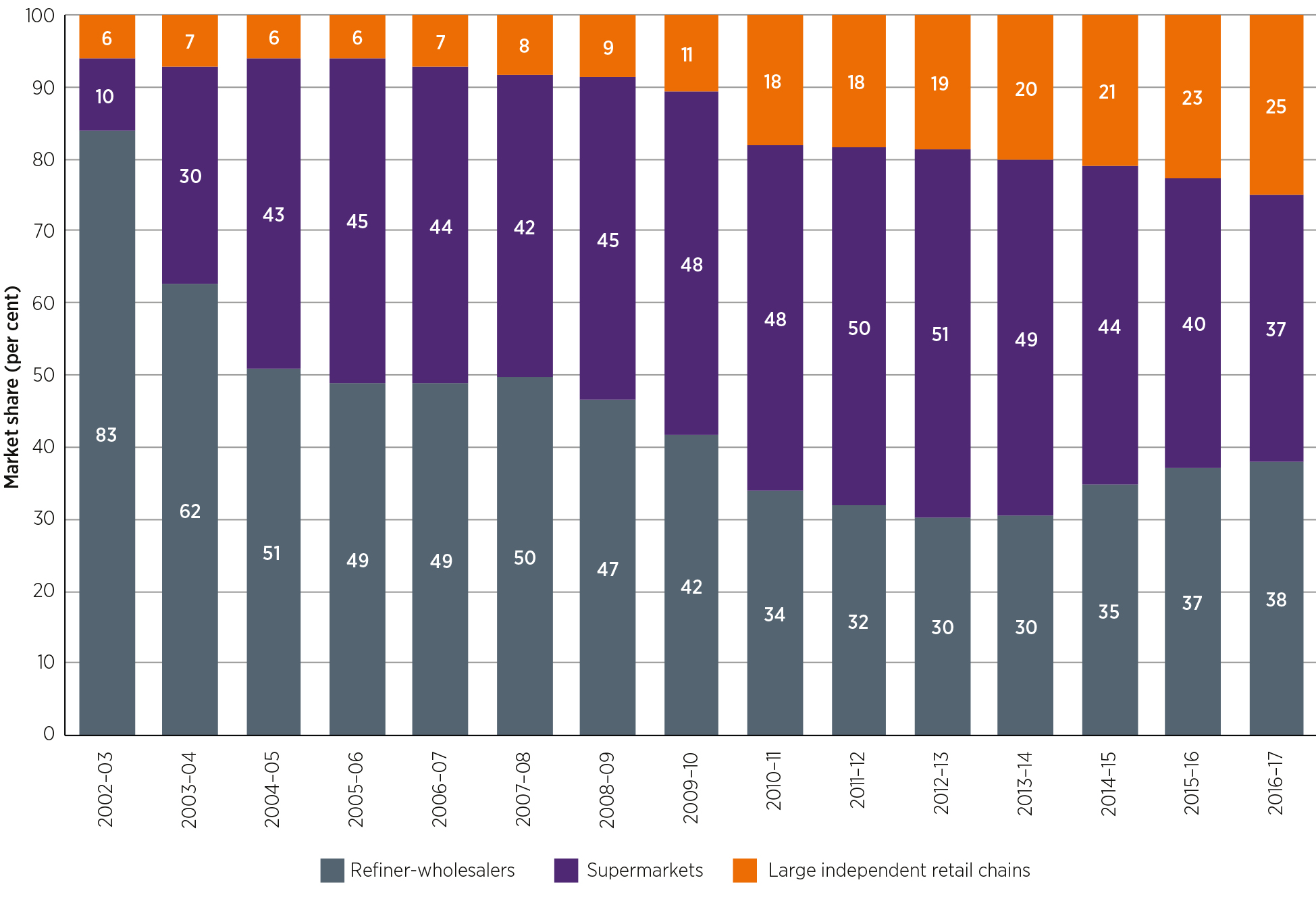 Source:    ACCC calculations based on data obtained from companies included in the ACCC’s petrol monitoring program.