The ACCC has preliminary concerns about AP Eagers’ (ASX: APE) proposed acquisition of the shares in Automotive Holdings Group (AHG) (ASX: AHG) that it does not already own, and its impact on competition in new car retailing in the Newcastle/Hunter Valley region of New South Wales.

The ACCC is currently assessing an application for merger authorisation from automotive retailer AP Eagers.

“The ACCC is seeking further feedback from market participants about this proposed transaction, in particular regarding the Newcastle/Hunter Valley region,” ACCC Acting Chair Delia Rickard said.

“We believe that local consumers generally don’t travel beyond the Newcastle/Hunter Valley region to buy new cars, and it is difficult to find out the final price for a car without visiting a dealership,” Ms Rickard said.

On 24 June the ACCC issued a market feedback letter setting out the ACCC’s preliminary views and summarising submissions received by then.

The ACCC’s preliminary view is that the proposed acquisition is unlikely to substantially lessen competition for the supply of new cars in Melbourne, Sydney and Brisbane or nationally, the wholesaling and retailing of used cars, the acquisition of car dealerships or the supply and acquisition of finance and insurance products.

“We are now seeking further submissions in response to the concerns outlined in our market feedback letter, and will continue to examine what effect this level of concentration would have on the size of discounts customers could obtain when buying new cars in the Newcastle/Hunter Valley region,” Ms Rickard said.

Submissions from interested parties should be provided by no later than 3 July 2019. The ACCC must make a final decision by 26 July 2019, unless AP Eagers agrees to extend this period.

Further information, including a copy of the application for merger authorisation and submissions received by the ACCC, is available at AP Eagers Limited proposed acquisition of Automotive Holdings Group Limited.

AP Eagers and AHG are the two largest automotive retailers in Australia. AP Eagers and AHG supply new and used cars, trucks and buses, as well as associated products and services such as car repair and servicing, authorised car parts, insurance and finance. Their operations overlap in Brisbane, Melbourne, Sydney and the Newcastle/Hunter Valley region of New South Wales. AP Eagers is the largest shareholder of AHG, holding 28.84 per cent of AHG’s listed securities as at 5 April 2019.

Merger authorisation provides an alternative to the informal merger review process, which is the most common avenue merger parties use to seek the ACCC’s views on a proposed acquisition.

AP Eagers is seeking authorisation on the basis that the proposed acquisition does not substantially lessen competition (consistent with the first limb of the authorisation test).

The authorisation process must follow formal steps set out in the Competition and Consumer Act, including that the ACCC must make a determination on the application within 90 days, unless the applicant agrees to extend the timeline. The process is public and transparent.

The ACCC has included Cessnock, Maitland/Rutherford and Singleton in the Newcastle/Hunter Valley region of New South Wales. 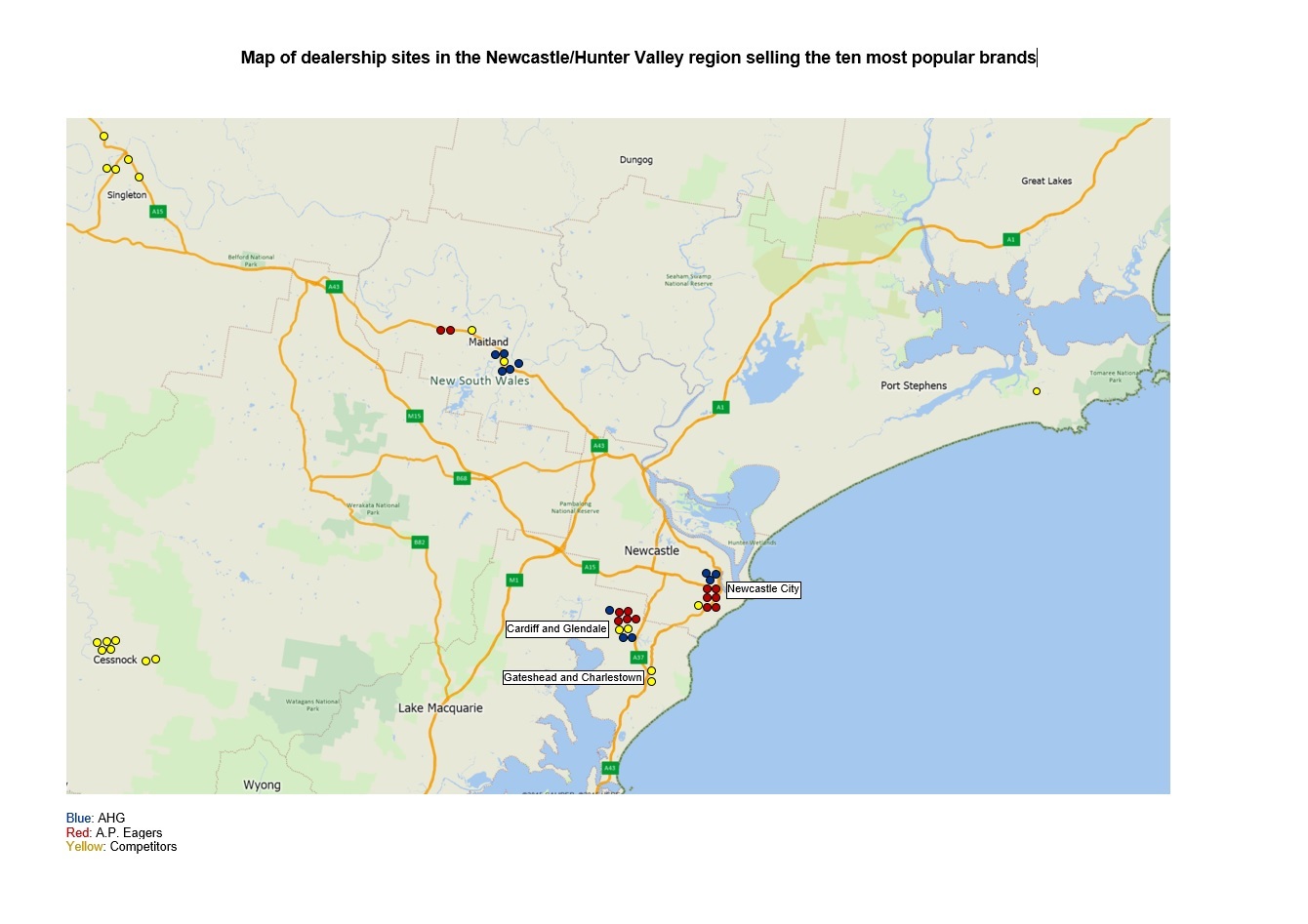