The ACCC has significant concerns about the retail price of rapid antigen tests, reportedly often costing between $20-30 per test and sometimes over $70 a test through smaller retail outlets, despite wholesale costs ranging between $3.95 and $11.45 a test.

These concerning practices emerged from the ACCC’s initial analysis of information so far received from the public, suppliers and retailers about the cost and prices of rapid antigen tests across the country.

The ACCC is continuing to analyse the information which includes more than 1,800 reports from members of the public, reflecting the continued significant community interest in the pricing of rapid antigen tests.

Currently, the prices reported are higher than in the initial days of reporting.

“At the extreme end, we have received reports or seen media coverage of tests costing up to $500 for two tests through online marketplaces, and over $70 per test through convenience stores, service stations and independent supermarkets, which is clearly outrageous,” ACCC Chair Rod Sims said.

“There are several businesses that have repeatedly come to our notice thanks to the information provided by the public. We are asking those businesses to urgently explain the prices they are charging.”

The ACCC has contacted more than 40 test suppliers, major retailers and pharmacy chains seeking information about their costs, current pricing, and stock availability, and reminding them they need to be able to substantiate any claims they make to consumers about the reasons for higher prices.

Information received from suppliers and retailers

The ACCC has written to suppliers and retailers about their costs and retail sales prices and is considering the responses received so far.

“The supply chain is often complex, with several businesses involved from the initial supply to the retail sale of tests to consumers. Retailers operating under the same brand or chain may be setting prices and selling tests independently of the other stores in the chain,” Mr Sims said.

“This means the wholesale and resulting retail prices can vary significantly.”

“Our inquiries so far confirm that a large volume of orders have been placed. However, given delays in the supply of tests, or test parts, into Australia, delays in distribution due to COVID illness or isolation requirements within workforces and at the retailer level, there is significant difficulty forecasting accurate supply,” Mr Sims said.

There are a range of different tests and different pricing, and a number of factors influencing wholesale price including the size of the order and supply channel used. On the data available so far, suppliers and intermediate suppliers report wholesale prices of between $3.95 and $11.45 per test, depending on the type of test and volumes purchased.

The ACCC has received over 1,800 reports from consumers about rapid antigen tests since 25 December 2021, rising after our media statement earlier this month, and now averaging close to 150 reports a day.

The ACCC’s initial analysis shows increasing sales by service stations and convenience stores. These channels have now become a common source of the pricing issues consumers have reported to the ACCC.

“We are looking in particular at reports of single tests being sold at around $30 or above from certain stores. For example, such sales have occurred from a number of King of the Pack and Metro Petroleum stores (70 and 40 complaints respectively). However, I want to emphasise the complaints are limited to a small number of individual stores in these chains and the majority of stores in those chains have not been the subject of complaints to us. We are writing to those traders to validate the reports and asking them to explain their prices so we can work out what’s going on,” Mr Sims said.

“We are also aware of other individual traders named in media and social media reports and will be engaging with those that give rise to concerns.”

The ACCC is also continuing to investigate potential scams after receiving increasing reports of online stores wrongly accepting payment, meaning the stores did not intend to supply the tests or knew, or should have known, that they would not be able to supply the tests in a timely manner. 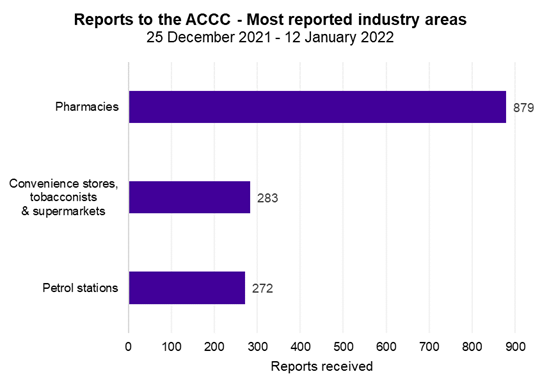 The most commonly complained about retail price in our reports is around $20 for a single test. It is important to note that reports to the ACCC will understandably be at the higher end of the range as consumers will not report more reasonably priced retailers.

“Our monitoring of publicly advertised prices has shown advertised retail prices much below $20 per test, though we have not yet ascertained how many test kits are being made available at such prices.”

From 7 January 2022, the average and the highest prices reported to the ACCC have increased to around $24 and $80 to $100 respectively. The highest price reported for a single test is $100. Some of the higher prices relate to reports of selling through online marketplaces. 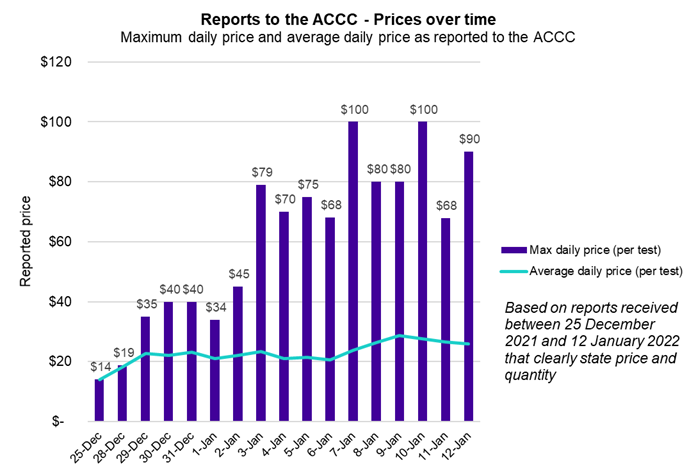 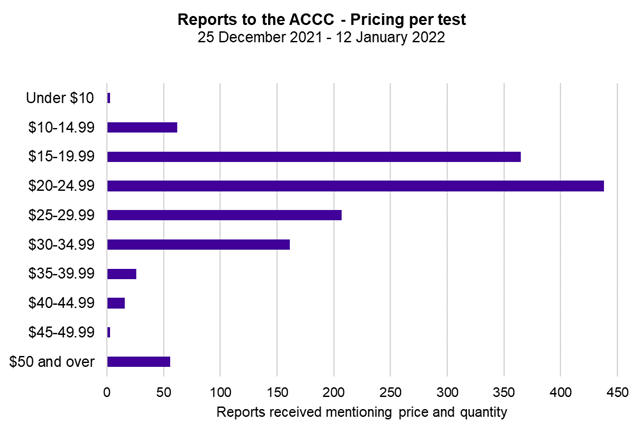 “In the middle of a significant outbreak of COVID-19 in a pandemic, the excessive pricing of rapid antigen tests required to diagnose the illness and protect other members of the public, is of significant concern to the ACCC,” Mr Sims said.

“Only a few weeks ago tests were readily available at most chemists and supermarkets for around $10 for a single test.”

“We realise demand and supply chain issues have impacted since then, but our initial research suggests that a price of around $20 per test or more, however packaged, may be hard to justify based on the average wholesale costs and such retailers should explain why the price is so high,” Mr Sims said.

“As supply chain issues ease and orders arrive, consumers should be able to access tests at more reasonable prices.”

“Any test costing more than $30, even with supply constraints, is almost certainly too expensive and would seem to be taking advantage of the current circumstances,” Mr Sims said.

While $20 is lower than the more extreme reports received by the ACCC, such retail prices reflect mark-ups from mainstream wholesale prices beyond what would usually occur in this segment.

The ACCC is continuing to examine claims by retailers about the reasons for the current prices, and whether those claims can be substantiated or are misleading. In certain circumstances, excessive pricing of essential goods or services may also be unconscionable conduct, a potential breach of the Australian Consumer Law.

Some retailers are reportedly refusing to provide receipts or providing incorrect receipts to consumers. The reports we’ve received about this issue relate mostly to convenience stores, tobacconists, and supermarkets (31 per cent of reports), pharmacies (27 per cent), and petrol stations (23 per cent).

Reports include a convenience store recording the sale of tests as a ‘sandwich’, while other retailers reportedly require customers to pay in cash and refuse to issue a receipt.

“We are closely examining reports of businesses refusing to issue receipts for rapid antigen tests. Refusal to provide receipts when requested or for total purchases of $75 or more (excluding GST) is a breach of the Australian Consumer Law. Businesses could face penalties for this conduct,” Mr Sims said.

The highest prices by far have been identified on online marketplaces, one of which featured an advertisement of a test for over $1,000 each.

Online marketplaces including eBay, Kogan, Gumtree and Facebook have updated or introduced new sales policies to cover rapid antigen tests. While some platforms allow their retailers to sell tests, most are removing listings where individuals are seeking to resell tests.

The selling of separated individual tests from multi-packs was also a significant issue reported to the ACCC, and is an issue also being addressed by the Therapeutic Goods Administration (TGA).

Consumers have reported packs being split and sold in individual lots, sometimes without instructions for their use, and tests approved for clinical or professional use being sold directly to consumers.

The ACCC is referring such reports to the TGA.

Consumers can report such concerns directly to the TGA via ECT@health.gov.au.

The ACCC is working with the Australian Federal Police (AFP) on matters that may be a breach of the determination under the Biosecurity Act introduced by the Government recently, which came into force on 8 January 2022, and will remain in place until 17 February 2022. The determination prohibits a person from reselling, or offering to resell, rapid antigen tests bought at retail level for mark-ups above 20 per cent.

“We will continue our investigations and analysis of information from consumers, retailers and suppliers, and will provide further updates in coming weeks,” Mr Sims said.

On 4 January 2022, the ACCC issued a media statement about the pricing of rapid antigen tests.

The ACCC established a dedicated team to examine the issue which commenced writing to retailers and suppliers, seeking information immediately. The team is examining the information provided, as well as the reports from members of the public.

While suppliers are generally able to set their own prices, businesses must not make false or misleading statements about the reason for high prices.

In certain circumstances, excessive pricing of essential goods or services may also be unconscionable.

Businesses must also set their prices independently of their competitors and not collude about pricing.

Consumers can contact the ACCC to report concerning conduct.