The payments follow an ACCC investigation into whether Coles fully passed on to Norco a 10 cents per litre (cpl) price rise it charged consumers for Coles branded fresh milk, as it claimed it would do in Coles’ marketing materials.

Coles has committed in writing to the ACCC that it will pay an additional 7 cpl for 2 litre and 3 litre Coles branded fresh milk, which amounts to around $5.25 million to Norco for milk supplied between 1 April 2019 and 30 June 2020, resolving the ACCC’s investigation.

The ACCC had been investigating allegations that, in a media release, social media posts and in-store signage, Coles represented that the full benefit of the 10 cpl retail price increase of its Coles branded 2 litre and 3 litre milk announced on 19 March 2019, would be passed on to farmers.

The ACCC’s investigation focused on claims that when an unrelated 6.5 cpl increase commenced on 1 April 2019, Coles reduced its payments to Norco under the 10 cpl retail price increase from 10 cpl to 3.5 cpl.

“We were fully prepared to take Coles to court over what we believe was an egregious breach of the Australian Consumer Law. We believe we had a strong case to allege misleading conduct by Coles,” ACCC Chair Rod Sims said.

“Accepting this commitment means that farmers will receive additional payments from Coles, with the majority of the money to be paid to Norco within seven days.”

“Court action would also have taken many months if not years, with no guarantee that any money would have been paid to farmers as a result,” Mr Sims said.

Coles’ statements included: ‘An extra 10 cents per litre to Australian Dairy Farmers’, and, ‘Coles will pass the extra 10c per litre to processors who will distribute all of the money to the farmers who supply them with milk for Coles Brand’.

“Coles allowed farmers, consumers and the Australian public to believe that its 10 cpl price rise would go straight into the pockets of dairy farmers, when the ACCC alleges this was not the case for Norco farmers,” Mr Sims said.

“We are pleased that Norco farmers will now receive additional money, commencing within seven days.”

“We take commitments made to us very seriously. The ACCC will be keeping a very close eye on Coles to ensure they follow through on this commitment, and we are not ruling out future litigation if necessary,” Mr Sims said.

Coles has committed to pay a lump sum to Norco for distribution to farmers within 7 days, which represents an additional 7 cpl base milk price increase for the period between 1 April 2019 and 1 December 2019.

Coles will then also pass on the additional 7 cpl to Norco farmers for the period between 1 December 2019 and at least 30 June 2020 by increasing the base milk price paid to Norco for 2 litre and 3 litre Coles branded fresh milk by 7 cpl.

The additional 7 cpl is more than the 6.5 cpl amount which the ACCC alleges was not passed through to Norco farmers.

Background
Coles has committed to providing an independent audit report to the ACCC confirming that it has paid the full 7 cpl to Norco on Coles branded 2 litre and 3 litre milk from 1 April 2019 to 30 June 2020, and has also committed to working with Norco to verify that Norco has passed this through to farmers.

Payments from Coles will be paid directly to Norco for distribution to its farmer members.

The ACCC understands that Coles did pass on the 10 cpl retail price increase to other dairy processors.

Norco is a milk co-operative with 326 farmer members on 214 dairy farms in northern New South Wales and Queensland. Norco supplies milk to Coles for its Coles branded milk, and also produces milk bearing the Norco brand, which is supplied at several of Coles’ stores.

A sample of representations made by Coles is below: 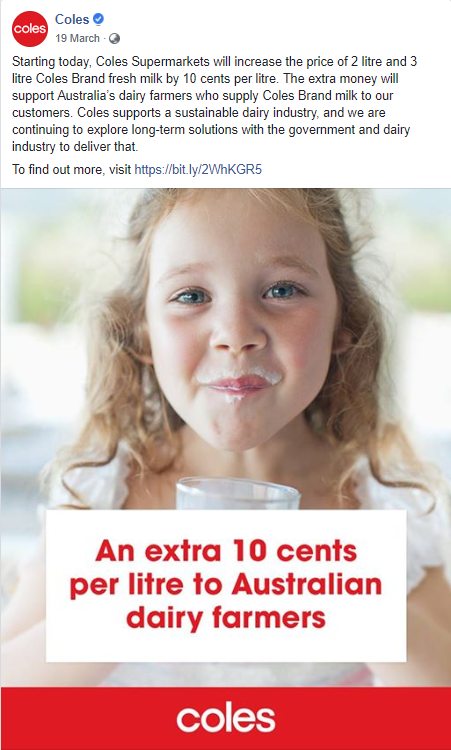