Caravan industry on notice for poor treatment of consumers

Australian consumers have reported widespread consumer guarantee failures, misrepresentations by caravan suppliers, and unexpected delays in the delivery and repair of caravans, according to the ACCC’s New caravan retailing report released today.

The report highlights key issues of concern in the market for new caravans and provides guidance to businesses about their obligations to comply with Australian Consumer law.

In an ACCC survey of 2,270 caravan owners, 80 per cent reported having experienced problems with their new caravan.

The number of consumer complaints to the ACCC about the caravan industry continues to rise, reaching more than 1,300 reports in the past five years. 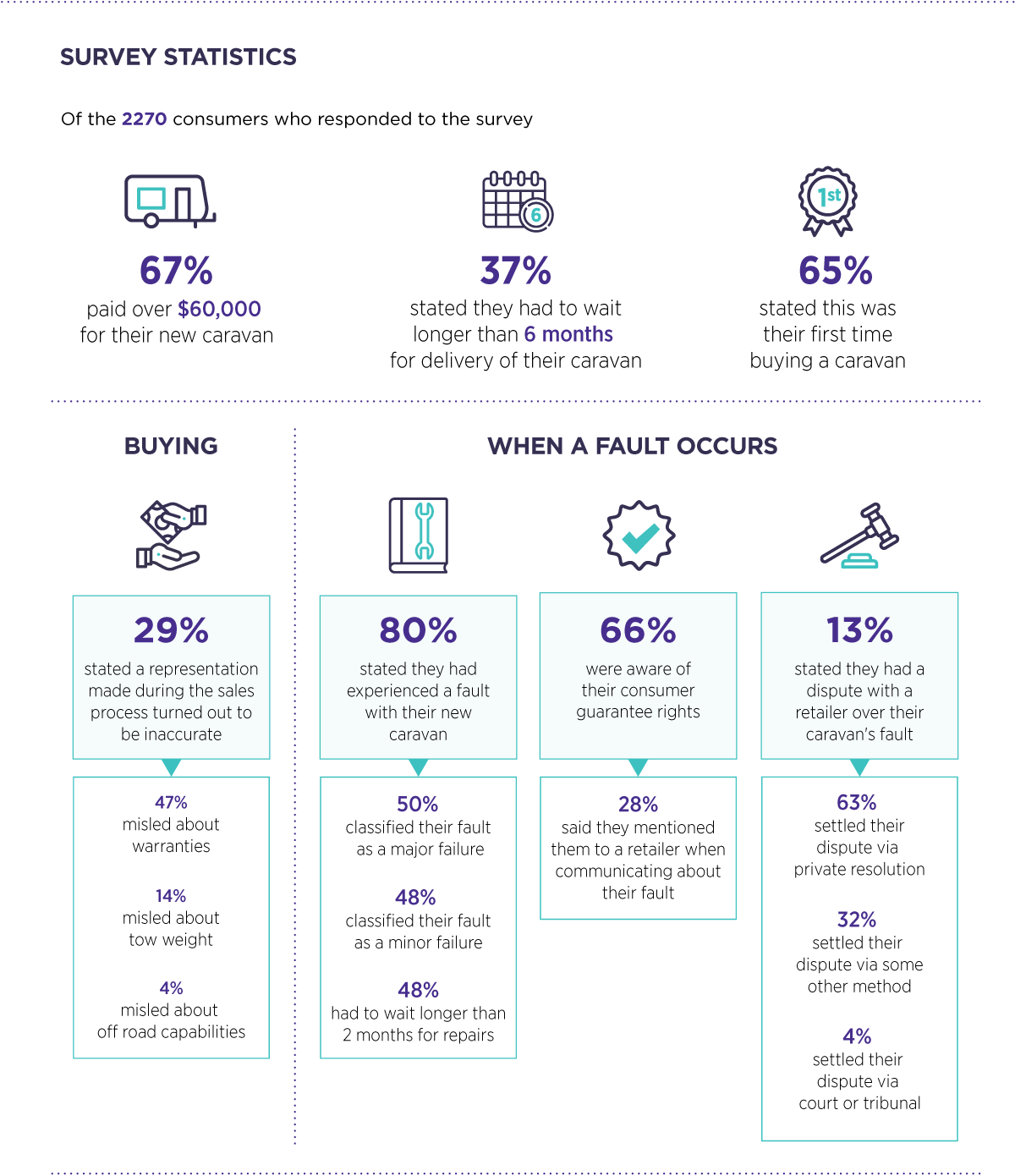 “A caravan can represent a significant financial and emotional investment. Some people save for years in anticipation of purchasing and travelling in a caravan. If something goes wrong the harm can be significant,” ACCC Deputy Chair Delia Rickard said.

Under Australian Consumer Law, if your caravan fails to meet one or more consumer guarantees, for example it is not of acceptable quality or doesn’t match a description made by a supplier, then you are entitled to a remedy from the supplier. A remedy can be a repair, replacement or refund.

Many consumers reported to the ACCC that when they experienced a failure with their caravan, they were unable to obtain a remedy or that the remedy provided did not fully address the failure.

“We are very concerned by these reported failures to comply with obligations under the Australian Consumer Law, and the impact that these failures have on consumers who have purchased a caravan which develops a fault.”

“Consumers need to be confident that when they make a significant financial purchase like a caravan, they will be able to get a refund, replacement or a repair if there is a failure,” Ms Rickard said.

“It is the ACCC’s view that it is reasonable to expect a new caravan won’t develop a major fault within the first several years of use.”

Under Australian Consumer Law, a retailer must provide the consumer with a remedy when there is a consumer guarantee failure. However, the Australian Consumer Law also provides the retailer is entitled to recover any costs associated with providing that remedy from the manufacturer. This reimbursement includes parts and labour associated with repairs.

In response to an ACCC survey, 40 per cent of caravan suppliers reported that a manufacturer had refused to reimburse them for providing a remedy to a consumer.

“While a supplier can take legal action against a manufacturer to recover costs, the ACCC’s survey of suppliers found some were reluctant to take this step due to fear of retribution,” Ms Rickard said.

“We are very concerned by reports that retailers are unable to obtain the reimbursement they are entitled to for providing remedies to consumers.”

The ACCC is also concerned that many consumers believe suppliers have misled them during the sales process or when problems with their caravan arose. The most frequently reported misleading claims were about consumer guarantee rights and their interaction with warranties.

“If your caravan has a major or minor consumer guarantee failure you may be entitled to a remedy even if the warranty provided by the business has expired,” Ms Rickard said.

Consumers also reported they believed suppliers made misrepresentations about their caravan’s performance capabilities, and tow-weight.

“Reports of misleading representations about caravan’s tow-weight and other important performance capabilities are particularly worrying given the grave safety implications for consumers,” Ms Rickard said.

“The ACCC will investigate and take enforcement action against suppliers and manufacturers we believe may have misled consumers.”

The report also found that many consumers experienced delays in the delivery of their new caravan, or for repairs to their existing caravan, some of which relates to COVID-19 supply chain disruptions and recent increased demand.

“We expect that suppliers will be upfront with consumers about the timeframe for delivery of their caravan and any potential delays during the sales process and continue to proactively communicate until delivery,” Ms Rickard said.

The ACCC strongly supports proposals to strengthen the Australian Consumer Law, including by enabling enforcement actions and penalties for when suppliers have failed to provide remedies for consumer guarantee failures and when manufacturers have failed to reimburse suppliers for providing remedies.

The ACCC has released guidance buying a new caravan to help consumers and businesses understand their rights and obligations when buying and selling caravans.

The ACCC has also developed information for the caravan industry to assist in complying with the requirements of consumer and competition laws.

The ACCC is concerned with the rising number of complaints (1,300) the ACCC has received about caravans over the past five years.

Accordingly, industry compliance with consumer guarantees regarding high value items including caravans is a 2022-23 Compliance and Enforcement priority for the ACCC, as it was in 2021-22.

In November 2021, the ACCC released two surveys directed towards consumers and suppliers to better understand the issues they faced in the new caravan retailing market.

In December 2021, the Treasury published a Consultation Regulatory Impact Statement (CRIS) on improving consumer guarantees and supplier indemnification provisions under the ACL. This included consideration of civil prohibitions with pecuniary penalties for:

The ACCC has provided a submission to Treasury’s CRIS process advocating for the ACL to be amended to introduce these prohibitions.

Jayco to pay $75,000 for misleading a consumer about consumer guarantee rights