Business losses to scams up 23%

Scammers swindled nearly $4.7 million from Australian businesses in 2017 according to the ACCC’s latest Targeting scams report – a 23 per cent increase compared to 2016.

The ACCC’s Scamwatch service received 5432 reports from businesses about scams in 2017. Businesses that fell victim to scammers lost an average of nearly $11,000.

“Scammers don’t discriminate and businesses have what scammers want: money. They’ll use a variety of cons to swindle busy workers and it can be very devastating to a business’s bottom line,” ACCC Deputy Chair Dr Michael Schaper said.

“We’ve seen a worrying and dramatic jump in losses reported to us about these two scams. False billing scams are where a scammer tries to trick a business into paying fake invoices for directory listings, advertising, domain name renewals or office supplies. The scammers are very aggressive and persistent in demanding payment,” Dr Schaper said.

“With employment and investment scams, scammers offer services commonly used by businesses such as web page development, search engine optimisation, small business loans and business directory listings. The business signs up to what seems like a good deal but quickly discover they receive no service and that the offer was not legitimate.”

“It’s vital Australian businesses are aware that scammers are actively out there targeting them and to ensure they have strong processes in place to avoid becoming victims,” Dr Schaper said.

Australian businesses are encouraged to visit www.scamwatch.gov.au to learn more about scams targeting them. They can follow @scamwatch_gov on Twitter and subscribe to Scamwatch radar alerts.

They can also sign up to the ACCC’s Small Business Information Network to receive emails about new or updated resources, enforcement action, changes to Australia’s competition and consumer laws, events, surveys and scams relevant to the small business sector. 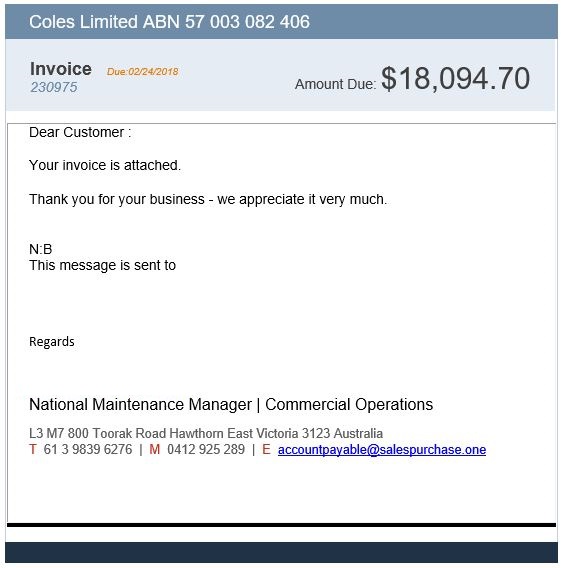 Example of a fake bill used by a scammer to trick businesses.
Release number:
92/18
ACCC Infocentre: